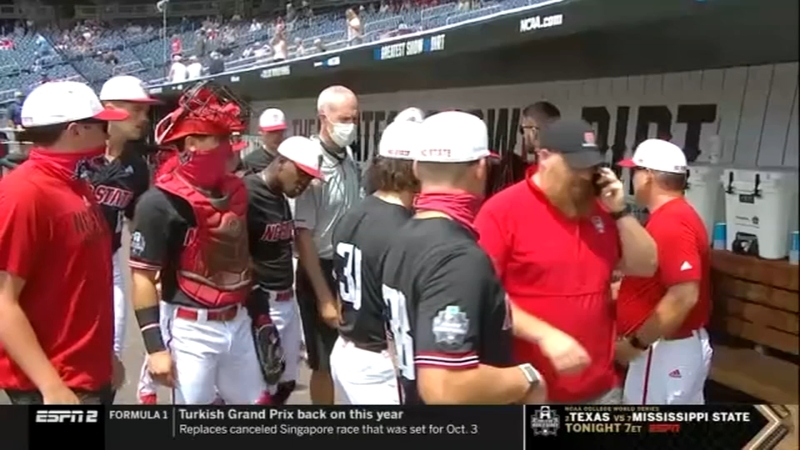 It was the first loss for the Wolfpack in the tournament. The Pack was missing several key starting field players and various pitchers after the university said "several" players were in COVID-19 health and safety protocols.

Only 13 of the 27 players on NC State's travel roster were cleared to play. Vanderbilt scored twice in the fourth inning and again in the sixth.

The two teams will play again Saturday at 2 p.m. with a trip to the CWS finals on the line. The game will air on ESPN.

"If you get a knock here or there, we might be talking about playing for the national championship starting on Monday," NC State coach Elliott Avent said. "Now we've got to come back tomorrow and beat a really good Vanderbilt team. And we've got to go back and regroup here and see what's going to happen."

State had several opportunities to tie or take the lead but failed to bring in a runner with bases loaded in the seventh inning or with two on and one out in the eighth.

Then in the ninth, the Pack put two runners on with two outs but Devonte Brown grounded out to short to end the game.

Vanderbilt starter Kumar Rocker struck out 11 in six innings against a Pack team missing half its roster.

Rocker is a projected top-10 pick in the Major League Baseball draft next month and was the CWS Most Outstanding Player in 2019 when the Commodores won the national championship. There was no CWS last year because of the pandemic.

The game was set to begin at 2 p.m. but started at 3:07 p.m. Eastern time after the health delay because of the positive COVID-19 tests.

An update on today's game.

Avent said he found out there was a problem 45 minutes to an hour before the game. He told ESPN during an in-game interview that players not with the team were getting tested Friday afternoon and, if the results were negative, would have a chance to play in the rematch Saturday.

The Wolfpack opened the game with nine position players and four pitchers available. Freshman pitcher Garrett Payne, who had six appearances this season, made his first start.

Payne tossed a career-long five innings in his first-ever start and his seventh appearance. The true freshman allowed just two hits, one earned run and three walks after facing 23 batters in his day of work.

He didn't surrender a hit until the fourth batter of the third inning.

Sam Highfill, the starting pitcher in NC State's 1-0 win over Vanderbilt on Monday, was the first baseman Friday and among four players at the bottom of the batting order who had a combined 27 at-bats and eight starts.

"It shows how tough we are," Highfill said. "We went out and played a heck of a game. It didn't go the way we wanted it to, but we're ready to go out and do it again tomorrow."

NC State had eight hits to Vandy's six, and the bottom of the order went 4 for 14. Highfill was error-free as the fill-in first baseman and went 3 for 4.

Avent told ESPN before the game that he gave his available players the choice of forfeiting the Friday game with the hope of having some players back on Saturday. The 13 players told him they wanted to play.

"Let me know what you want to do," Avent said he told them. "Took about probably six seconds. That's who they are. We found a way to make it work."

Avent also said he would pull his team off the field during the game and forfeit if he believed his players were risking injury. Avent told reporters Monday that an illness was running through the team but made no mention of it possibly being COVID-19. He said associate head coach Chris Hart had been sick for five or six days and that Jarrett and pitcher Cameron Cotter weren't feeling well.

The pandemic heavily disrupted college sports over the past year and three teams dropped out of an NCAA championship event because of COVID-19: The VCU men's basketball team, the Michigan men's ice hockey team and the Rice women's volleyball team.

Vanderbilt is the third-ranked team in the country, but beating a top team under pressure is nothing new for this Wolfpack team.

NC State made it to Omaha by beating the top-ranked team in the country, Arkansas, in back-to-back games after getting blown out 21-2 in the first game.

In that game, Vanderbilt had their best pitcher, Jack Leiter, on the mound. He threw 8 innings and struck out 15. He made only one mistake: giving up the home run in the fifth inning to Tatum.

The winner will play a best-of-three series against either Mississippi State or Texas.

Highfill, who threw 100 pitches Monday, said he would have gone to the mound if needed Friday and will be ready to take the ball Saturday.

"I'm not going to say I could go out there and throw nine innings," he said, "but my arm feels good."

NC State and Mississippi State are the two teams left in the field that have never won the College World Series.