GREENSBORO, N.C. -- Buddy Boeheim scored 27 points with a season-high six of Syracuse's 14 3-pointers, and the Orange beat North Carolina State 89-68 on Wednesday in the second round of the Atlantic Coast Conference tournament.

Syracuse (16-8) will face top-seed, and No. 16 Virginia on Thursday in the quarterfinals. The Cavaliers won the only regular-season meeting, hitting 14 3-pointers en route to an 81-58 victory on Jan. 25. Syracuse was 5 for 24 from 3-point territory.

Syracuse scored the first 10 points of the second half with 3-pointers by Quincy Guerrier, Alan Griffin and Joe Girard to build a 15-point lead. The Orange finished the half shooting 8 of 15 from distance.

Boeheim had three 3-point attempts in a 21-second span late, to try to reach a career-high in points (29) and 3-pointers, but they didn't fall and he went to the bench with 2:41 left.

Boeheim gave Syracuse its first double-digit lead at 22-12 on the first of his three straight 3-pointers. He finished with four 3-pointers in the half and 20 points on 8-of-11 shooting. The Orange shot 58.1% overall.

Girard finished with 14 points, Griffin and Guerrier each had 12, and Robert Braswell 11 for Syracuse. Guerrier picked up his fourth foul with 10:51 remaining and fouled out at 2:39.

Isaiah Wong scored 20 points for the second straight game and Miami became the first No. 13 seed to ever reach the quarterfinals in the Atlantic Coast Conference tournament, upsetting No. 5 seed Clemson 67-64 on Wednesday.

Miami (10-16) advances to play fourth-seeded Georgia Tech on Thursday. The Hurricanes lost the regular-season meeting 87-60 on Feb. 20 - but it comes with an asterisk as Wong sprained his ankle in the first half and didn't play in the second. 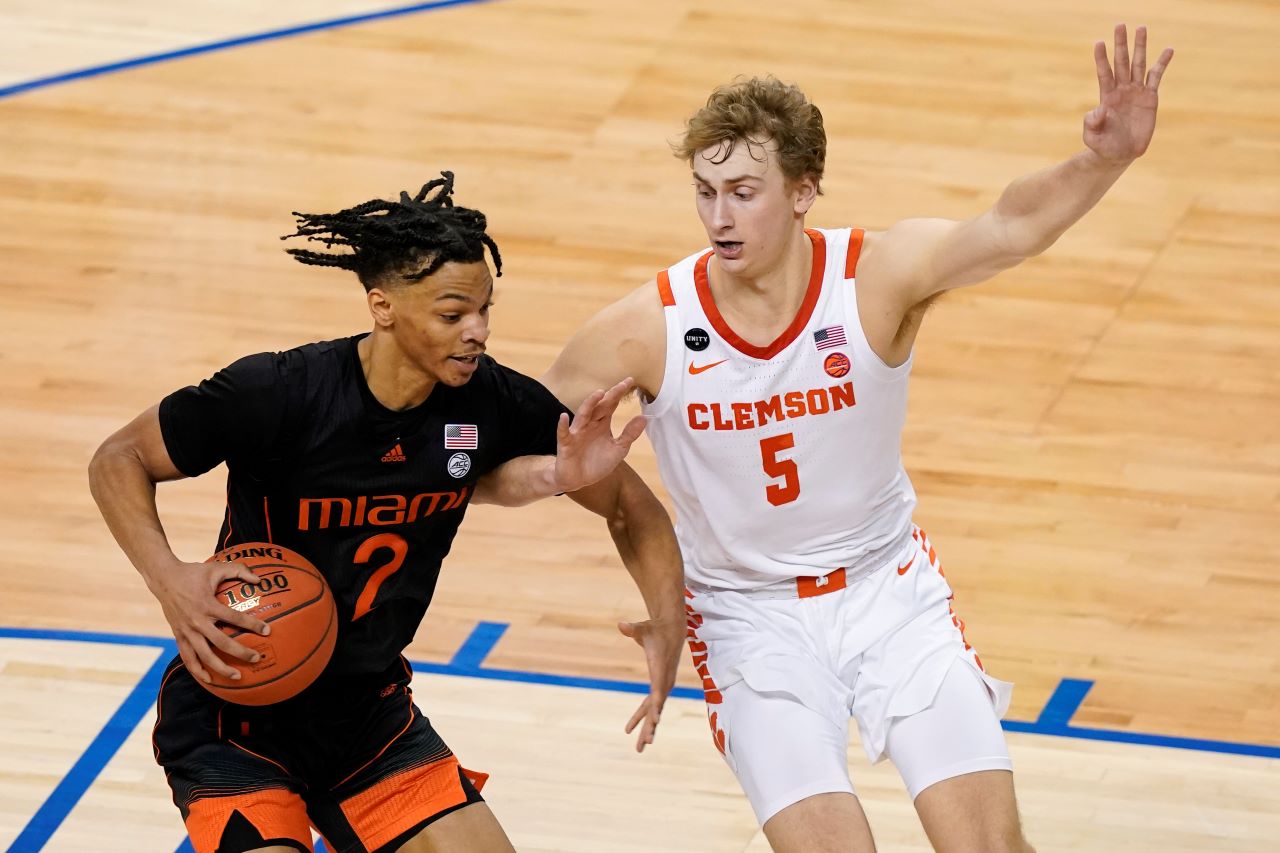 The Hurricanes have earned consecutive victories in the ACC tournament for the first time since 2013, when they won the title. Their three-game winning streak overall is their longest since they were 3-0, before a wave of injuries began to take a toll.

"This group has been through so much adversity, so many injuries, so many close losses," Miami coach Jim Larranaga said after his 200th win with the program. "But the guys are having fun and enjoying playing with each other. I think they're enjoying, 'Hey, I don't come out. I get to play the whole game.' And so they keep plugging away. I'm very, very happy."

Miami, which played with just six scholarship players, had a 65-59 lead with 1:36 left before turning it over twice in the final 40 seconds to keep Clemson in it.

Clyde Trapp sank a long 3-pointer to pull Clemson to 65-62, and after Miami turned it over under it's basket, Al-Amir Dawes sank two free throws at 36.1 to make it a one-point game.

Wong was trapped near midcourt and threw it away, and Clemson called its last timeout at 14.3. Nick Honor got into the lane for a runner that bounced off and Wong secured the rebound and hit two free throws at 2.9. Clemson turned it over at halfcourt.

Walker made two 3-pointers during a 14-2 run to give Miami a 57-50 lead with 8:16 left. Deng Gak had two dunks during the spurt and Wong capped it on an easy layup following a turnover.