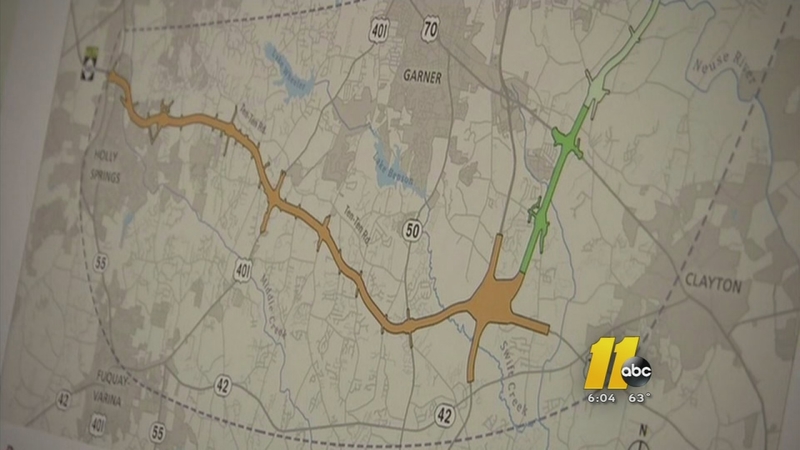 The state road construction project known as "Complete 540" is one step closer to living up to its name.

The state Department of Transportation has recommended "Alternative 2" for the southern half of the Capitol city's so-called "Outer Loop." In layman's parlance, and for anyone who's been paying attention, Alternative 2 is made up mostly of the Orange Route west and south of Raleigh, as well as the Green and Mint routes to the east.

CLICK HERE TO SEE A MAP OF THE PROPOSED ROUTES (.pdf)

DOT project manager Eric Midkiff outlined the plan Wednesday. He said people and property were their primary consideration in selecting the Orange/Green/Mint route.

As is, Midkiff says 281 homes and businesses stand in the way of the project corridor: 271 homes, 6 businesses, 3 non-profits, and 1 farm. But Midkiff says that's a lot better than their other choices.

"Once a decision is made," Midkiff continued, "and we have chosen a preferred alternative, then we are going to further refine those designs within that corridor with the goal of minimizing impacts more to homes and businesses. So I fully expect that number to go down."

But if that's the upside, a big downside to Alternative 2 could be environmental. "This recommendation would have more wetland impacts," explained Midkiff.

The Orange Route was problematic a few years ago because of the endangered "dwarf wedgemussle" which lives in waterways along the path. Midkiff says there's no guarantee that the shell-fish and wetlands in the corridor won't continue to present a problem.

"We have been working with fish and wildlife throughout this project trying to find ways to improve the viability of the dwarf wedgemussle. There are several environmental studies that have yet to be completed."

Midkiff says the recommended path still needs buy-in from federal agencies and other stakeholders, and that's where we could see another sticking point.

"There definitely could be a comment that could sway the decision," said Midkiff. "At this point I really don't know."

The final decision should be made this spring after stakeholders have had a month to weigh in. If it gets the go-ahead, the project could get underway in 2018.

The total cost of the project is estimated at $2.178 billion, of which, state taxpayers will be on the hook for about $1.45 billion. The rest would come from tolls.

If you want to get in touch with the DOT to see if your property is on the list of homes threatened, there are a number of ways to do that: