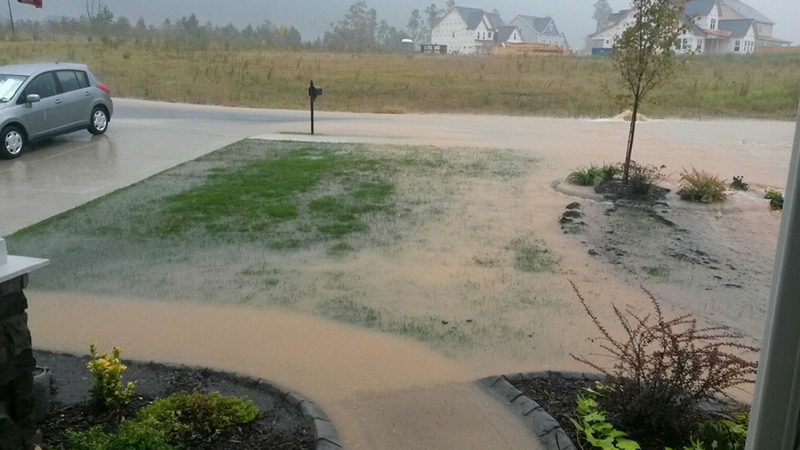 FAYETTEVILLE, NC (WTVD) -- When you buy a new home, there are expectations that you won't have to deal with many major problems. If there are problems shortly after moving in, homeowners expect their builder to take care of them. Army Captain Mauro Bazan never expected to deal with the water issues he's been dealing with after moving into his new Fayetteville home.


Captain Bazan and his wife are both active duty and have two little girls. When they bought their newly constructed home in the Liberty Hill subdivision last year, they were excited to finally be settled. Just days after moving in, there was a problem.

According to Bazan, "Four days after we bought the home, it flooded."

He says when it rained, the water from the neighborhood came down the street and up through the storm drain surging towards his home. He says that there was so much water in his garage that all of his boxes filled with home goods, along with his military uniforms and supplies, got wet. He says the flooding was not a one-time issue.

He reached out to his builder, Caviness &Cates, and the developer of the subdivision, Cornerstone Development Group of Fayetteville, but Bazan says there was never a fix to his water issues. Bazan says anytime there's a hard, heavy rain, his yard floods. The continuous flooding has caused problems to his home.

"There was a four foot hole on the foundation in the crawl space where the water rushed through and tried to get underneath, and we had damage to the foundation," said Bazan.

He says he also has concerns with electrical issues along with erosion and washouts to his yard in the front, back and side. Bazan says his builder did come out and address several of his issues.

With no resolution, Bazan kept fighting and reached out to the City of Fayetteville. While the city investigated, they did put sandbags around Bazan's home to try and prevent any further damage to his property.

"The last time I have seen sandbags like this is when I was deployed in Afghanistan," said Bazan.

A representative with the city said they put the sandbags around Bazan's home because they, "were concerned about his safety as well as any damage flooding might cause to his home. We placed the sandbags there as a means of mitigating any harm to him and/or his home while we investigated his claim for damages."

Sandbags in front of the home.

The city recently wrapped of their investigation and issued a 'Notice of Violation and Code Enforcement Order'. According to that order, an investigation found evidence that the storm water design plans for Bazan's subdivision have not been effective in preventing frequent flooding. It goes on to state that the ineffective plans resulted in damage to Bazan's property. The city states that they are not legally liable for errors prepared by homeowners's developers, engineers, or contractors. According to the order, if action isn't taken by December 1 to correct the issue, the city may take action. That action could include withholding a certificate of occupancy for building or improvements constructed or being constructed on the site, disapproval of permeants, civil penalties, criminal charges and other actions.

Bazan's builder, Caviness and Cates, said they regret that Mr. Bazan has experienced this issue with his new home. The representative, Andrew Benbow, adds that they could not have disclosed the storm water issue to Mr. Bazan at the time of sale, because they were not aware of any water/flooding issues at any time before the house was sold.

"There is no way that we could have foreseen that the storm drains in the development would fail to function as intended," he said.

Benbow maintains that Caviness & Cates is in no way responsible for these issues as they did not develop the community, design the storm water plan, or accept responsibility for the streets and drains.

"Caviness & Cates cannot work to correct this issue on our own; they need the developer, engineer and City involvement as well. This week, our attorney has been meeting with all other parties. While we don't have a timeline as of yet, we hope that a solution will be finalized by the engineer and approved by the City soon," he said.

I did reach out to the developer, Cornerstone Development LLC of Fayetteville, but did not hear back from anyone.

Despite the mess that Bazan is in, construction by other builders continues around him.

Bazan said he hopes that any potential buyers in the Liberty Hills Subdivision will recognize the damage that has been done to his home before they buy in the neighborhood.

"I don't want anyone else to go through what we have in the last one and a half years," Bazan said.

ABC11 worked with Brian Ross of ABC News in this investigation. CLICK HERE TO READ MORE