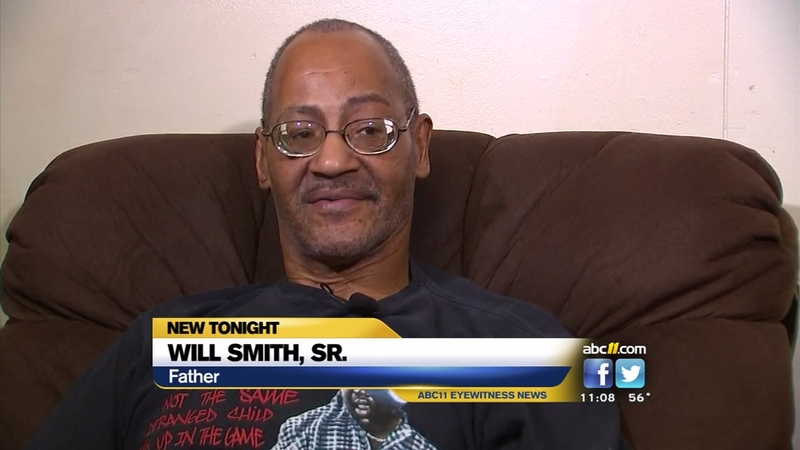 Through tears, Will Smith Sr. talks about when he imagines the reality of the loss of his son will hit him.

"It's going to hit me when I'm in that funeral home, my child in a box," Smith said at his Durham home Tuesday afternoon.

Will Smith Sr. reflects on his son's senseless death at his Durham home.

Smith's son, and namesake is Will Smith Jr., the former NFL defensive end who was gunned down Saturday night in New Orleans after a traffic accident. He was 34.

"I spoke to my child 12 hours before he was murdered. I saw my child last Wednesday," Smith Sr. said.

He said he had just seen his son in New York. Smith Sr. was there visiting his sister and other family when his son flew in, with his wife from Jamaica. They had just witnessed loved ones renewing their wedding vows there. Smith said when his son heard his father was in New York with family, he headed there to see his dad.

Will Smith Jr. in his Ohio State uniform. Smith won a BCS title and was an All-America defensive lineman for the Buckeyes.

"We were just sitting around and laughing," Smith Sr. recalled.

During the weekend, Smith Sr. was still in New York with family when one of his relatives woke him up to show him a news alert.

"It said Will Smith gunned down in street," recalled Smith Sr.

He said for a moment he first thought it was Will Smith the actor, because he never imagined it could be his own son.

"As I read on, it said Will Smith an ex NFL player for the New Orleans Saints had been gunned down in the street and that's how I found out," Smith said.

Will Smith Jr. with his wife, Racquel, and family.

Hayes has since been charged with second-degree murder. His attorney, John Fuller, has said his client felt threatened and wasn't the only one with a gun that night. He implied his client only fired because he believed Smith Jr. was going for his gun.

New Orleans police confirmed on Tuesday that they did find a gun in Smith Jr.'s car and his father doesn't deny that his son had a license to carry and kept a weapon in his car.

He does argue with Hayes' attorney about his son being the bigger threat that night.

"My son got out of his car with a loaded mouth, he did not get out of his car with a gun. This gentleman purposely got out, he never walked back to his car when he was out, never walked back. When my son turned his back, he shot him in the back," said Smith, Sr. "Then he walked up on him and shot him again, and then when his wife started yelling we have babies, he shot her. Now somebody in public, in society, please tell me where that was not murder."

Smith Sr. said Hayes' attorney's comments are what are driving him now to talk publicly about what happened.

As for how he feels about Hayes himself, Smith Sr. is already trying to move on.

He said nothing that happens in the court system will bring back his child. So for now, Smith Sr. is grieving and planning his son's funeral. He is also working up to the moment when he has to move one of his son's photos to a wall in his Durham home he refers to as "the wall of life." It's a wall in his home with photos of family members that have passed away. On there now is an uncle and grandparents.

"I don't want to put him on that wall," Smith said. "A parent shouldn't have to put their child on that wall."