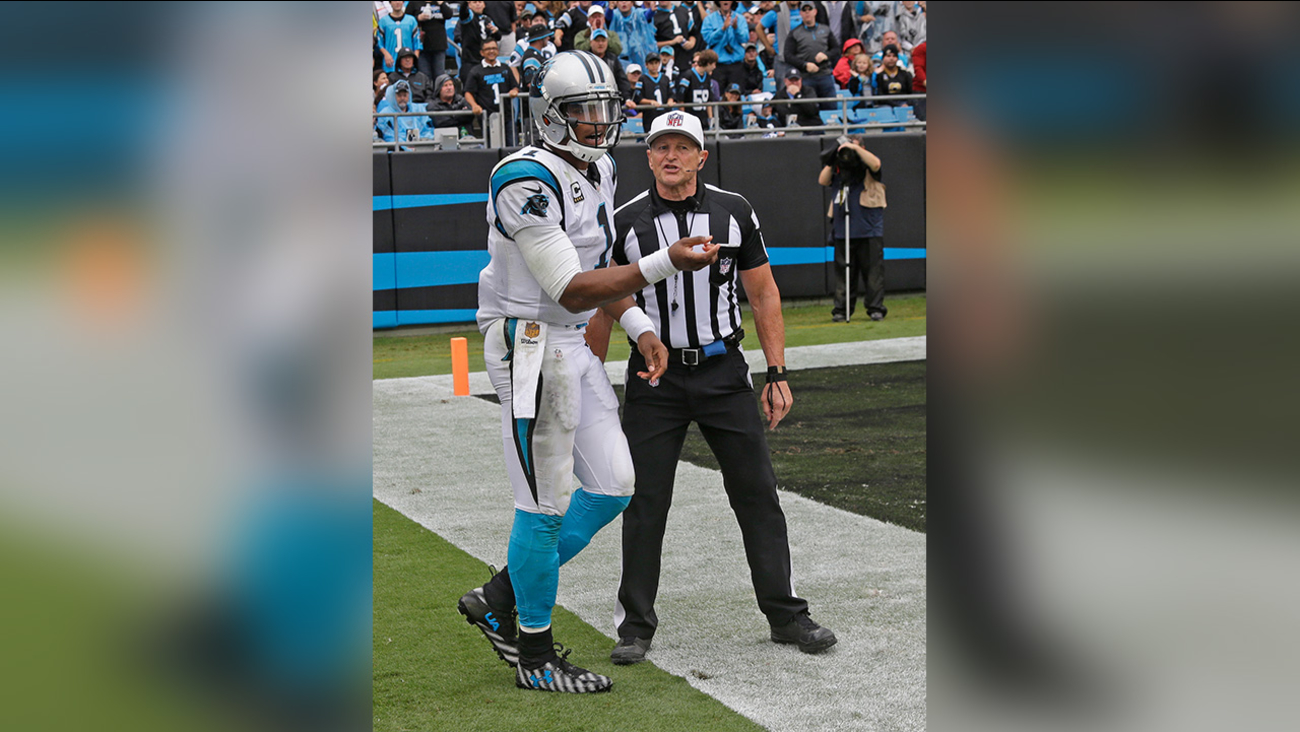 Sept. 27, 2015 photo of Carolina Panthers' Cam Newton, left, talks with referee Ed Hochuli, right, after being hit on the sidelines in the second half (Bob Leverone)

CHARLOTTE -- The NFL vice president of officiating says that referee Ed Hochuli insists he never told Carolina Panthers quarterback Cam Newton that he "wasn't old enough" to get a personal foul call during Sunday's game against the New Orleans Saints.

Newton called out the veteran referee after Carolina's 27-22 win after he felt a personal foul should have been called on Saints defensive tackle Tyeler Davison for hitting him out of bounds after he released a pass.

TV replays show Newton having a brief conversation with Hochuli after the play, and the quarterback reacted at one point with surprise, stopping in his tracks before breaking into a wide, disbelieving smile.

"The response that I got was, 'Cam, you're not old enough to get that call,'" Newton said at his postgame press conference Sunday. "I was looking at him like, 'I didn't think that you had to have seniority to get a personal foul or anything like that.' ... Heaven forbid he gets any rookies. They are going to have a long day man."

Blandino declined an interview with The Associated Press through the NFL office, citing a busy schedule. NFL game officials such as Hochuli aren't allowed to conduct interviews during the season, per league rules.

Blandino told the NFL Network if it is found that Hochuli did tell Newton he "wasn't old enough" to get calls, he could be reprimanded.

The process would include determining if anyone in the area had a microphone on and see if any comments were picked up. Blandino said there have been times in the past when an official said something inappropriate to a player and was disciplined, although he didn't elaborate.

"Any official could be disciplined if they say something inappropriate and we do not teach that the number of years a player is in the league is going to determine whether a foul is called," Blandino said. "It's the posture that he's in and was there a violation. So saying something to that effect is certainly something that is not appropriate."

Panthers coach Ron Rivera refused to address the issue on Monday saying, "It was addressed by Cam yesterday and the league has addressed it and we're going to leave it at that. We're going to move forward."

Blandino said Hochuli made the right call by not throwing the flag.

At 6-foot-5 and 245 pounds, Newton is one of the biggest quarterbacks in the NFL.

There is a perception, whether warranted or not, that because of his physical stature and the fact that he runs more than any quarterback in the league he doesn't get as many personal fouls to go his way.

Newton alluded to that Sunday, saying "it is one thing to be frustrated in a situation where you see a personal foul on an opposing quarterback get called. For me, when it is something around that same range and for that flag not to be called, I am ticked off really."

However, Newton has drawn more personal fouls (30) than any quarterback in the league since coming into the league in 2011, according to STATS.

The next closest is Matthew Stafford with 24, and Matt Ryan, Robert Griffin III and Andrew Luck with 23.