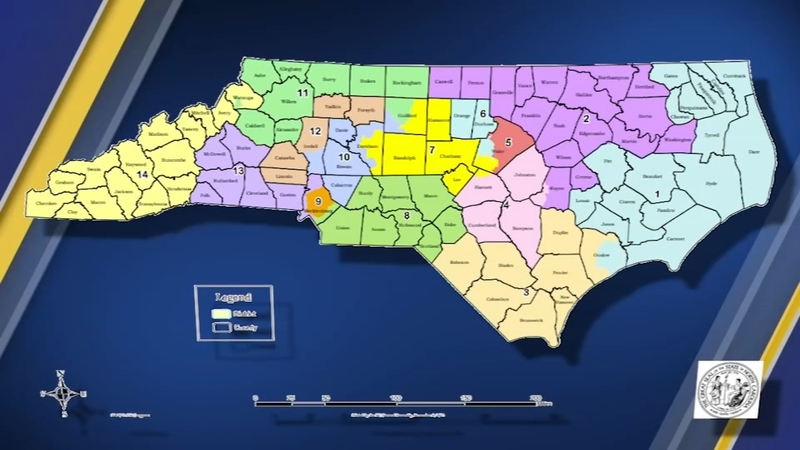 RALEIGH, N.C. (WTVD) -- The clock is ticking for the Republican-led General Assembly to redraw district maps for the next decade after the state Supreme Court ruled their first attempt was an unconstitutional and extreme partisan gerrymander.

The House and Senate both gaveled into session on Monday, but neither chamber scheduled any meetings or hearings among their respective redistricting committees.

"I don't know when we'll get together to talk about it, but I want all of you to know that we are reporting and ready for duty," Senate Minority Leader Dan Blue, D-Wake, said. "This state still has serious unmet needs and the sooner we get this job done in redistricting in a way that is fair to the voters in this state, the sooner we can get to the job of addressing these unmet needs."

House Minority Leader Robert Rieves, D-Chatham, likewise said his caucus is ready to engage with its Republican colleagues. Though Democrats roundly voted against all the proposed redistricting maps last year, they reserved particular ire for the congressional map, which several analysts predict will give the GOP a good chance of winning as many as 11 of 14 districts -- an astounding number considering how evenly divided the state is between registered Democrats, Republicans and unaffiliated voters.

The Supreme Court's 4-3 ruling along party lines stated that the extreme partisan gerrymandering by Republicans violated several provisions in the North Carolina Constitution, including the right to free elections, freedom of speech and equal protection of citizens. The trial court, likewise, blasted Republicans for intentional, pro-Republican partisan redistricting, but stopped short of saying it was within the judiciary's power to be the referee.

The justices' order gives the General Assembly until Feb. 18 to draw new districts, and there's already some hesitation, if not confusion, on how to proceed as lawmakers await the formal opinion from the court to spell out the exact line between what is considered legal and permissible partisan redistricting vs. what would be considered extreme and illegal.

"When you watch little kids they got the concept that if you have the ball you have to share it with Johnny a little bit," Sen. Blue said he answered questions from reporters. "Maybe we can retrogress back a little bit to what we learned in the sandboxes and what we learned in elementary school. We got an idea of what fair, is and I'm pretty sure my Republican colleagues do, too."

House Speaker Tim Moore, R-Cleveland, said Monday that the House will draw new maps next week, but speculation was still rampant among political insiders and analysts on whether the NCGOP was simply waiting on the Supreme Court for a more detailed opinion -- or if there was more political gamesmanship ahead.

"I think it could be a political strategy at play," David McLennan, Professor of Political Science at Meredith College, told ABC11. "They may allow the court to do an interim map and then they've left the possibility to take this up again in 2023."

According to state statute, an interim map created by the courts shall only apply for the next election cycle - not the decade, as a General Assembly-drawn map would require -- so lawmakers could draw maps again after an election year where two seats on the court are also on the ballot.

"There's one retirement coming on the state Supreme Court -- Robin Hudson, who is a Democrat -- and Sam Ervin, who is running for re-election. So there's a possibility for turnover of two seats," McLennan explained. "That's what Republicans are hoping for is they can move from a 4-3 Democratic advantage to a 5-2 Republican advantage, which would make any redistricting cases in 2023 or beyond much more in their favor."

As for the weight of court precedent, the registered Republicans currently on the court, especially Chief Justice Paul Newby, were already outspoken even during oral arguments.

"We've found that different compositions lead to different interpretations," McLennan said. "So I would say precedent is important but if we see a turnover in Supreme Court justices, precedent may make less of a difference."

Complaints about partisan redistricting, or gerrymandering, almost always arise when one party controls the redistricting process and has the ability to maximize the seats it holds in a state legislature or its state's congressional delegation. Democrats have had a long history of drawing maps favorable to themselves when they controlled the state legislature. Republicans in North Carolina, however, have been under scrutiny since becoming the state's majority party in 2010.

Indeed, the U.S. Supreme Court issued a landmark decision in 2019 on partisan redistricting, in a case involving North Carolina, where the 5-4 majority ruled federal judges should stay out of state redistricting issues.