New signal lights on I-540 hit bump in the road 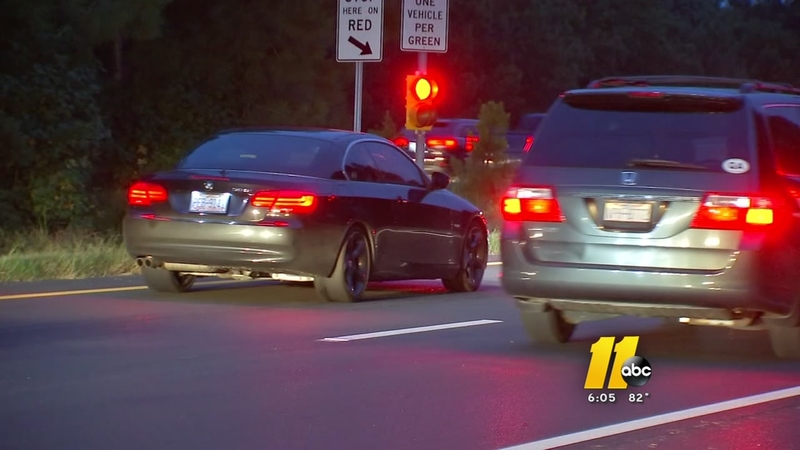 Bumpy start for I-540 on-ramp signals

RALEIGH, North Carolina (WTVD) -- The North Carolina Department of Transportation's plan to alleviate congestion on Interstate 540 in Wake County has hit a bump in the road but the agency promises a smoother ride ahead, starting Wednesday.

The NCDOT activated signal lights for the first time on Tuesday morning at four entrance ramps for drivers merging onto I-540 in North Raleigh.

The westbound on-ramps at Leesville Road, Creedmoor Road, Six Forks Road, and Falls of Neuse Road now all have signals controlling the flow of cars onto the interstate.

Basically, if you see a red light, you'll have to stop before you merge onto I-540.

RELATED: 5 things to know about new on-ramp signal lights on I-540

However, the signals were not working as planned, so the state shut them down after about 30 minutes.

Abbott acknowledged, experts tested the system for two weeks before they rolled it out to make sure there wouldn't be any glitches. What happened?

Traffic signals no longer on at 540. NCDOT says they weren't working the way they wanted so software company is making adjustments. #ABC11 pic.twitter.com/OFtMqEpw9S

Officials say sensors in the road track traffic flow information to a computer that can make real time adjustments, allowing car onto the entrance ramp every couple of seconds.

Drivers who've seen them work in other states tend to think they work but most say they're taking a 'wait-and-see' approach when it comes to the new lights along 540.

"It actually kept you from running into cars when you were trying to get on the freeway," said Raleigh's William Whittington. He watched them in action in Los Angeles and says they worked well.

"It'll turn green when there's enough space for you to actually pick up speed and get on without having an accident. The key is the timing. They have to get the sensors and everything with their computer program timed up right or else.

Justin Shover, born and raised in Raleigh, has watched 540 explode from "barely used" to congested every morning. "At 7 it's starting to get congested. If you're stuck there from 7:30 to 8:30, it's adding 10, 20, 30 minutes to commute times; and then when you have accidents and other incidents that occur time to time, it can be even longer."

Shover's never seen the lights up and running but was on point about what they're there to do. "I think it's to help manage the influx of cars during rush hour times primarily. This really isn't a big city but as population grows and if you look at statistics, it's skyrocketing around here. So traffic is going to become a problem and the implementation of things like this that larger cities have, I think does help. But how you go about implementing it is probably just as important."

That's something the DOT showed us all on it's first day of Beta testing. For Shover, it could be a while before he's ready to try for himself. "I think for a period of time while that gets going I'll probably avoid 540 in general during those hours."

For more about the signals, visit www.ncdot.gov/projects/onrampsignals