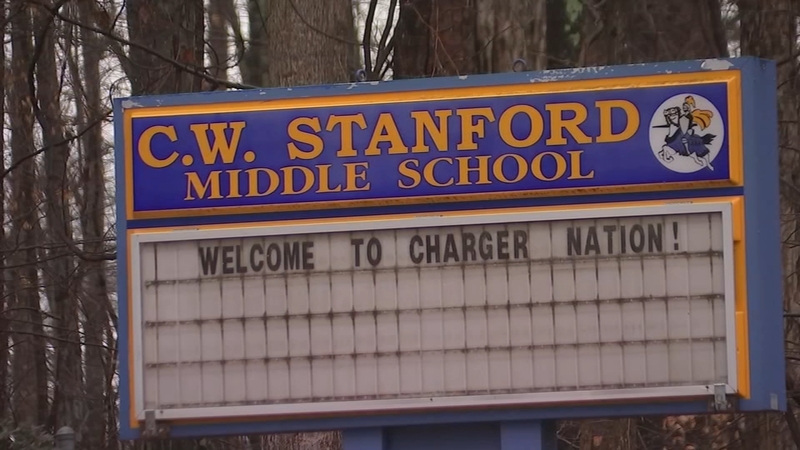 HILLSBOROUGH, N.C. (WTVD) -- An Orange County teacher is off the job and an investigation is ongoing into allegations that he inappropriately touched female students at C.W. Stanford Middle School in Hillsborough.

Sheriff Charles Blackwood told ABC11 that Orange County Superintendent Dr. Monique Felder texted him Jan. 18, a Saturday morning, to tell him about allegations that were reported to her.

Since then, the sheriff said school staffers have carried out an internal investigation, interviewing eight different students.

The mother of one of those seventh-grade girls told ABC11 that her daughter reported to administrators that her teacher started inappropriately touching her and others during class in September.

On Jan. 20, another classmate reported the teacher, prompting her daughter to come forward as well.

"She said that (the teacher), when she would have questions and would go up to his desk -- he's seated, she's a small seventh-grader -- would put his arm and caress her back while she was asking the question and then kind of move his hand around her hip to where his fingers would touch her pelvic area," the mom said. "And she had asked him several times to stop."

ABC11 is not identifying the mother, to protect her identity and that of her daughter.

She said the teacher was put on administrative leave during the school's internal investigation.

On Monday night, the principal emailed all seventh-grade parents letting them know the teacher had transitioned from the school, but the email that went out did not explain why he was leaving or under what circumstances.

No criminal charges have been filed.

"Orange County Schools has a standard practice of conducting fair and detailed personnel reviews, reporting matters to the appropriate authorities as the circumstance dictates, and taking appropriate action based on the review's outcome," the superintendent said in a statement to ABC11.

The school did hand over those eight student statements to the sheriff's office; investigators are now reviewing those and a child protective services report that the parent ABC11 spoke with has filed.

ABC11 asked the superintendent for comment Tuesday, to learn whether the teacher, while no longer with Stanford Middle School, is still eligible to teach at another Orange County school.

"We can confirm that (the teacher) was suspended and will not return to any Orange County School," the superintendent said in a statement to ABC11.

The superintendent said the district cannot provide detailed information about confidential personnel matters but did say that interviews are underway to hire a replacement teacher.