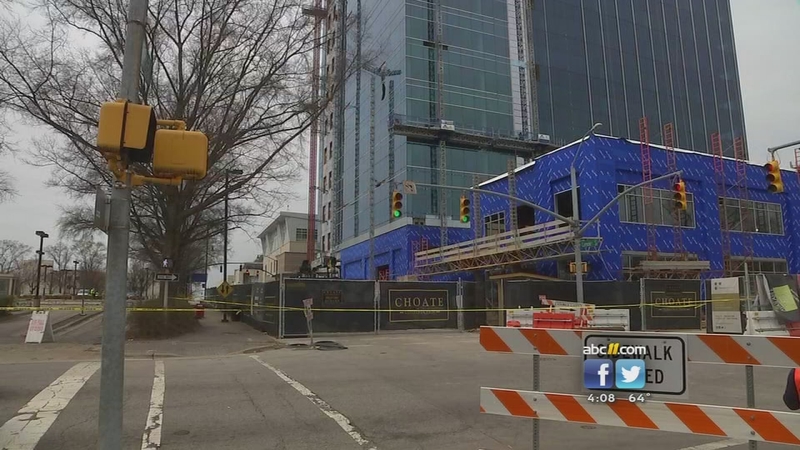 RALEIGH (WTVD) -- Federal OSHA inspectors arrived in Raleigh Wednesday to work alongside state inspectors with their investigation into this week's deadly scaffolding accident.

NC Department of Labor spokesperson Neal O'Briant said he didn't know how long federal inspectors would be in Raleigh, trying to figure out what caused a mast climber to collapse Monday morning, killing three construction workers and seriously injuring another.

The cousin of one of the deceased workers, Jose Hernandez, visited a memorial Wednesday set up at the corner of Fayetteville and Lenoir Streets. Marco Tulio Claros drove all night from New York to see the place where his cousin died.

Hernandez was from Honduras but living in Durham while he worked and saved so that he could return home to his wife and two young children in November.

"Right now she doesn't know what happened here," said Claros. "She doesn't know that my cousin has died. Nobody can talk, you know, my family over there and the mother because maybe she die or something like that."

Claros says Hernandez's employer will help pay for the funeral and plane tickets for his family to come to the U.S. in the next week.

Shaw University is situated a block away from the Charter Square construction site. The school's chaplain said one student was an eyewitness to the horrific accident Monday morning.

"When students see this, they say well, 'Where was God in all of this?' And the thing is, he was there," said Rev. April Rhinehardt. "He's still there."

The university is hosting a public prayer service at Boyd Chapel on campus this Friday at noon. Anyone is invited to attend and pray for the victims and their families.

Funeral services have already been planned for one of the victims, Anderson de Almeida. His family will be at The Chapel of Hall-Wynne Funeral Service at 1113 West Main St. in Durham, 4-6 p.m. on Saturday; the funeral service will follow at 6 p.m.