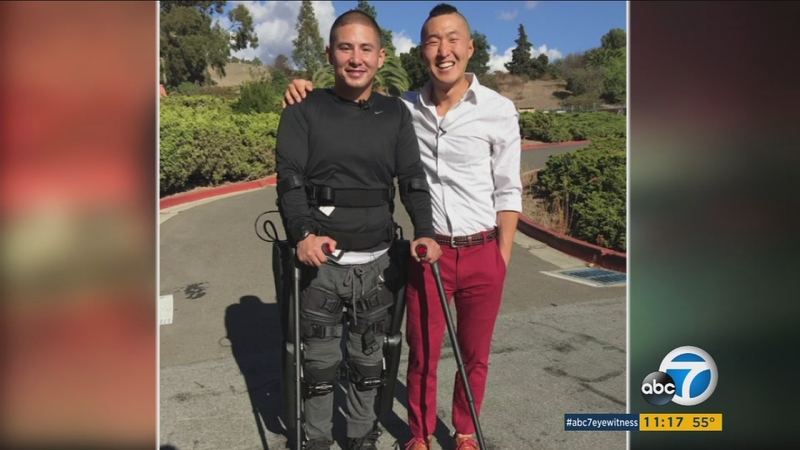 LOS ANGELES -- "I will walk" is a phrase Arthur Renowitzky repeated every day for eight years.

Now, Renowitzky is learning to take his first steps again thanks to robotic legs.

"I always had the never give up attitude and I knew one day I would walk again," Renowitzky said.

Renowitzky's journey would not be possible without the kindness of complete strangers reaching out to him.

In 2007, Renowitzky was shot during an armed robbery. A bullet left the high school athlete paralyzed.

In response, he founded the Life Goes On Foundation. His message? "Keep pushing."

Renowitzky frequently speaks at schools about nonviolence and encouraging students to focus on the positive things in life.

ABC7 first profiled Arthur in 2013. At the time, his wheelchair had been destroyed in a hit and run accident and he had no way to get around.

Actress Pauley Perrette saw our story and reached out to Arthur on Twitter.

"I actually found him on Twitter by the time your news segment was over. I was like direct message me right now," said the "NCIS" star at the time.

Perrette would grow close with Renowitzky and mentor him on non-profit work.

Eugene Yoon heard about Renowitzky and Perrette's story and thought of a way he could help.

Eugene's pitch? That he walk the Pacific Crest Trail (Mexico to Canada) as a fundraiser for Renowitzky.

The goal? Raise $80,000 to buy Renowitzky robotic legs. A "Re-Walk" would allow him to stand up and move around.

Renowitzky was in disbelief. "Eugene is truly one of a kind," he said.

"I literally would think about Arthur and I would realize and remember he's back at home in rehab, trying to walk again. And for eight years, this has been his fight," he said.

He slept on his yoga mat and ate mostly Ramen noodles plus Mac and Cheese.

ABC7 profiled Yoon during his stopover in Acton. Yoon said the trek got more difficult towards the end.

"I almost gave up on mile 1,018 because I was just mentally checked out, physically I was done and I remember at that point, people started to reach out to me on social media. Just complete strangers would send me really inspiring notes of kindness," said Yoon.

Yoon said it was all worth it when he found out Renowitzky would be obtaining his "Re-Walk" device.

"That moment filled me with so much joy. It made every single hardship on the trail feel worthwhile," Yoon said.

After Yoon finished his hike, he met up with Renowitzky to watch him stand up in the device and walk towards him.

"I remember the second I saw him stand, I just started crying," said Yoon.

"I wanted to break down, you know, I gave him a hug," Renowitzky said.

Both want to continue to fundraising for Life Goes On, so others can walk again.

Renowitzky also wants to grow his relationship with Yoon.

"When I do get married, I want him to be there and be my best man and stand up next to me when I get that chance," he said.