PHILADELPHIA -- Pop artist Robert Indiana, best known for his 1960s "LOVE" series that led to the statue in Center City Philadelphia, has died at his island home off the coast of Maine. He was 89.

Indiana died on Saturday from respiratory failure at his Victorian home in a converted Odd Fellows Hall, a fraternal order lodge, where he had lived for years on Vinalhaven Island, said James Brannan, his attorney.

Friends had expressed concern for his well-being because the reclusive artist had not been heard from for some time. A lawsuit filed in New York City the day before his death suggested he was purposefully isolated by his caretakers.

The artist's "LOVE" sculpture, in which the "L'' and a leaning "O'' sit atop the "V'' and the "E," is instantly recognizable worldwide. The one in Philadelphia was installed in the city in 1976.

But he has created other works as well, and fashioned a "HOPE" design, similar to "LOVE," in honor of former President Barack Obama.

"In some ways he was perhaps seen as the proverbial one-hit wonder because 'LOVE' was so immensely iconic and immensely huge in pop culture. For better or for worse, it overshadowed some of his other contributions," said Dan Mills, the director at Bates College Museum of Art in Lewiston, Maine.

In his later years, he was known for living an increasingly reclusive life 15 miles off the mainland on Vinalhaven, where he moved in 1978.

Kathleen Rogers, a friend, and former publicist, told The Associated Press that she was so concerned she contacted the Maine Department of Health and Human Services to investigate six to eight weeks ago.

Through tears, she said did not want Indiana to be remembered for shutting out friends and closing his studio.

"He was a better guy than he's been portrayed as being. He was reclusive, cantankerous and sometimes difficult. But he was a very loyal, loving man. He was the architect of love," she said.

A DHHS spokeswoman did not immediately return a message seeking comment.

As the story goes, Indiana, who was born in Indiana, settled in Maine after becoming disillusioned with the art scene in New York.

But he told The Associated Press in 2009 that he moved to his house - which a benefactor bought for him - when he needed a place to go after his lease ran out on his five-story studio and gallery in the Bowery section of New York City.

His desire for solitude was legendary.

He once stood up President Barack Obama at the White House. Another time he made a crew from NBC's "Today" show wait days before he would let them interview him. In 2014, he disappointed dozens of fans by failing to make an appearance outside his home for an event dubbed International HOPE Day, which was inspired by his creativity. Events were held in several locations around the world.

Although he created a wealth of art, the iconic "LOVE" tended to overshadow his other work.

Decades later, Indiana's other art took center stage in a 2013 exhibit, "Robert Indiana: Beyond Love," at the Whitney Museum of American Art in New York City. "Well, that's taken a while," he quipped.

In Maine, Mills said he was inspired by the Whitney's efforts to produce a 2016 exhibition, "Robert Indiana: Now and Then." It was one of the last major shows focusing on Indiana's work, Mills said. 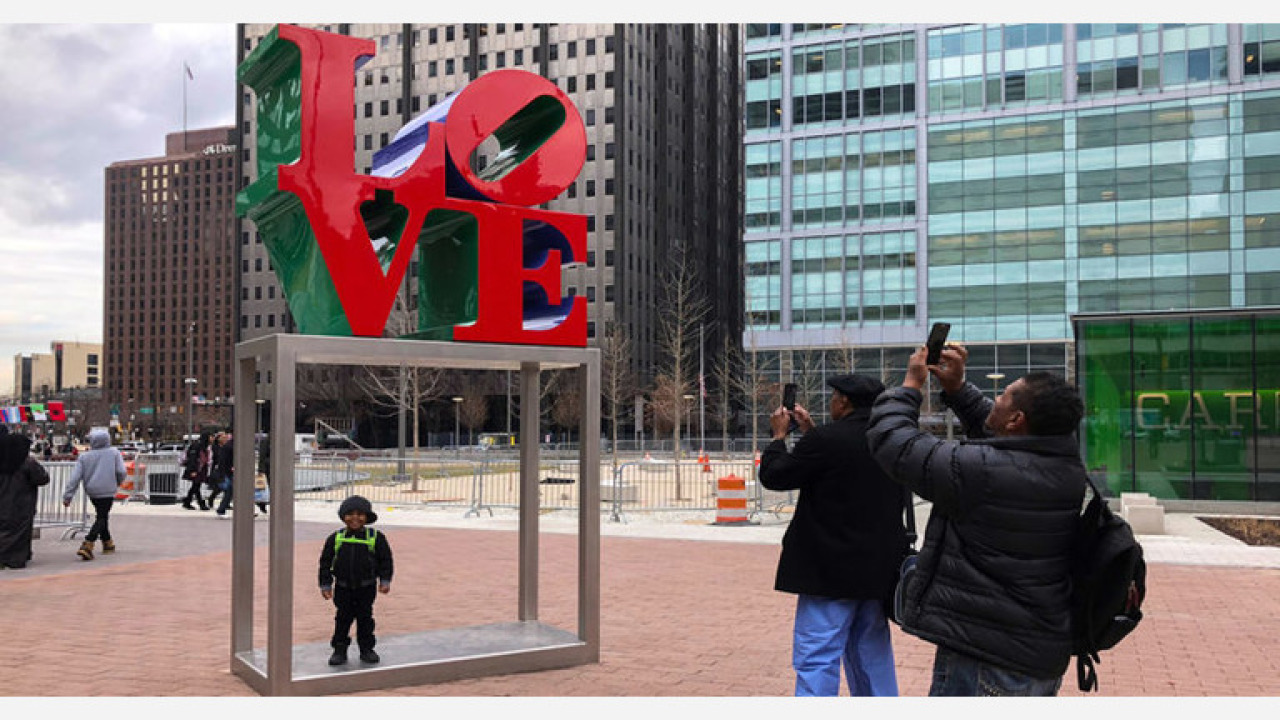