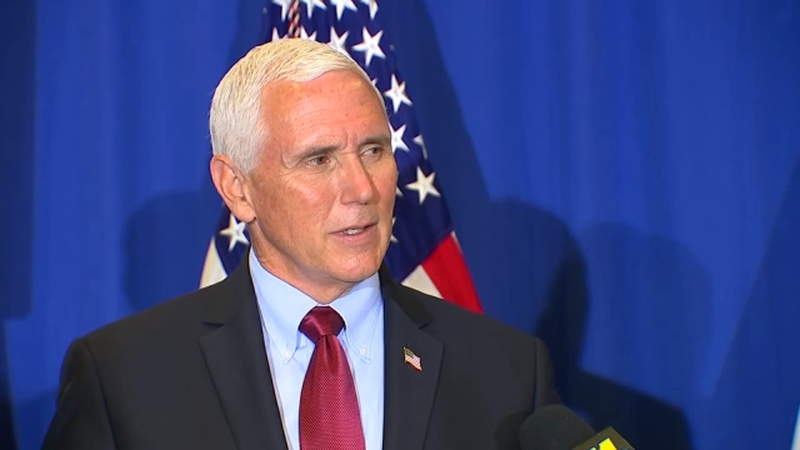 RALEIGH (WTVD) -- Vice President Mike Pence confirmed that President Trump will accept his nomination at the Republican National Convention in Charlotte next month.

"The people of North Carolina voted to send this president to the White House 4 years ago and we know North Carolina's gonna vote for 4 more years for President Donald Trump on November 3 but before all that in Charlotte we're gonna re-nominate this president for 4 more years and as the president said our plan is to be here that week to be able to have him receive that nomination," Pence said in an exclusive interview with ABC11.

The Republican National Committee is planning to have a limited number of delegates in Charlotte to conduct the party's official business on Aug. 24.

"It's just one more way that we can express our gratitude to the great people of this state and our determination to have 4 more years of President Donald Trump in the White House," Pence said.

In Raleigh on Tuesday, Gov. Roy Cooper was asked about Trump's plans for the convention.

"He's welcome to come," Cooper said. "But nothing has changed about our resolve to keep health and safety first. We have not heard anything from the administration or the RNC about this."

Trump previously moved the convention's public events out of Charlotte because of concerns about COVID-19.

"It's a different world, and it will be for a little while," Trump said last week. "To have a big convention is not the right time."
Report a correction or typo
Related topics:
politicscharlottewashington d.c.ncrepublicansmike pence2020 presidential electionu.s. & worldpresident donald trump
Copyright © 2021 WTVD-TV. All Rights Reserved.
More Videos
From CNN Newsource affiliates
TOP STORIES