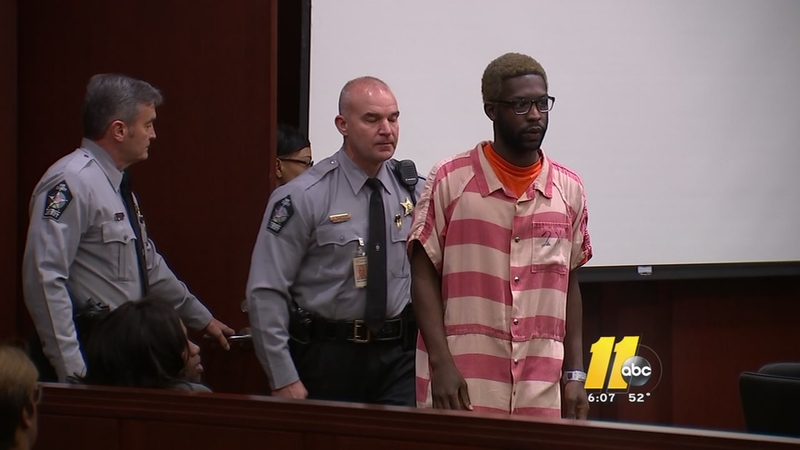 RALEIGH (WTVD) -- A man charged in a double murder at a Raleigh hotel near Crabtree Valley Mall has been extradited to Wake County from Florida and appeared in court Thursday.

Brandon Xavier Hill, 29, arrived at the Wake County jail Thursday and appeared in court to face numerous charges, including:

Hill is being held on no bond for the murder charge, and a $3 million bond on the other charges.

Hill dyed his hair and went on the run after the double murder December 2 at the Americas Best Value Inn-Crabtree/Raleigh. The victims were identified as April Lynn Holland, 22, and Dwayne Garvey, 27.

Soon after the killings, police released a surveillance photo of the two suspects in the case.

Earlier this month, police arrested 28-year-old Seaga Edward Gillard and charged him with one count of murder in connection to the death of Holland. He was taken to the Wake County Detention Center.

According to warrants, Holland - who was pregnant with her fourth child - was found shot to death in a hotel room. Garvey was found face down in a hallway near the lobby. Detectives said multiple shots were fired at the victims. Almost 10 shell casings were found.

Friends said the couple was homeless and had been staying at the hotel for about a month.

Hill led police on a multiple-county chase in early December but got away. He was later captured in Florida, the Raleigh Police Department said.

Police say they found several powerful firearms, badges, and stolen Durham police uniforms in the car they recovered after the North Carolina chase.

Hill's first-degree kidnapping and assault by strangulation charges stem from a separate incident on October 28.