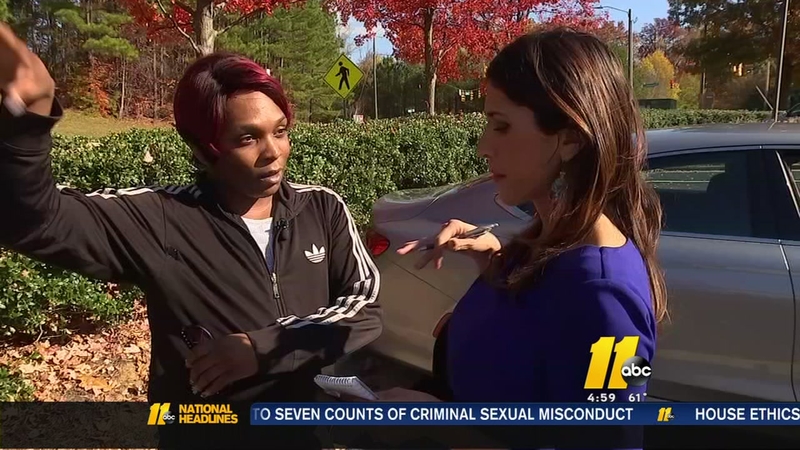 RALEIGH, North Carolina (WTVD) -- A clerk who beat an alleged armed robber with a baseball bat in Raleigh early Tuesday is now out of a job for violating company policy.

Around 12:30 a.m. Tuesday, authorities said they were called about a wild encounter between the suspect and a Juwan Harris at the Circle K in the 2500 block of South Saunders Street.

Winston left, but Harris went after him in the parking lot with a baseball bat. She hit Winston in the head and held him until police arrived.

The suspect was taken to WakeMed stable condition and later released to police. Harris was not injured and called 911 to report the incident.

Speaking exclusively with ABC11 Tuesday, Harris said she understands beating Winston was against company policy, but she stands by her actions.

"I feared for my life. He held customers hostage and was pushing and harassing my customers - that was my thing. He could've come back and did it again. To me, I did what I had to do. I felt what I did was right," she said.

Police said Winston took off with cigarettes and money, and he will be charged with common law robbery.

ABC11 has decided to slowly reduce the number of stories on the website that have a comments section. We believe very strongly that our audience should have an opportunity to discuss and debate events in our world, however, we have not been able to moderate the comments as well as we would like. Instead of hosting a platform that could allow a few loud and ugly voices to dominate a conversation, we want to encourage everyone to join us on our social media platforms and speak out there. Facebook: facebook.com/ABC11 Twitter: twitter.com/ABC11_WTVD
Report a correction or typo
Related topics:
raleighrobbery
Copyright © 2022 WTVD-TV. All Rights Reserved.
RELATED
Raleigh clerk beats robbery suspect with bat
TOP STORIES
VP Harris tells Buffalo mourners: Stand up for what's right
Durham mother who founded anti-gun violence group loses second son
Woman gets 15 months in prison for punching flight attendant
Troubleshooter helps Cary woman get relief over return policy
I-40 west reopens in Johnston County after 6 car crash
Police inaction moves to center of Uvalde shooting probe
Victim found dead with gunshot wound in Durham crash identified
Show More
Jury's duty in Depp-Heard trial doesn't track public debate
Former Uvalde school teacher grieves for her mentor, students killed
RDU expects more traffic for Memorial Day weekend
Uvalde mass shooting spurs new debate over guns and mental illness
Wake County homes left damaged after Friday's severe weather
More TOP STORIES News