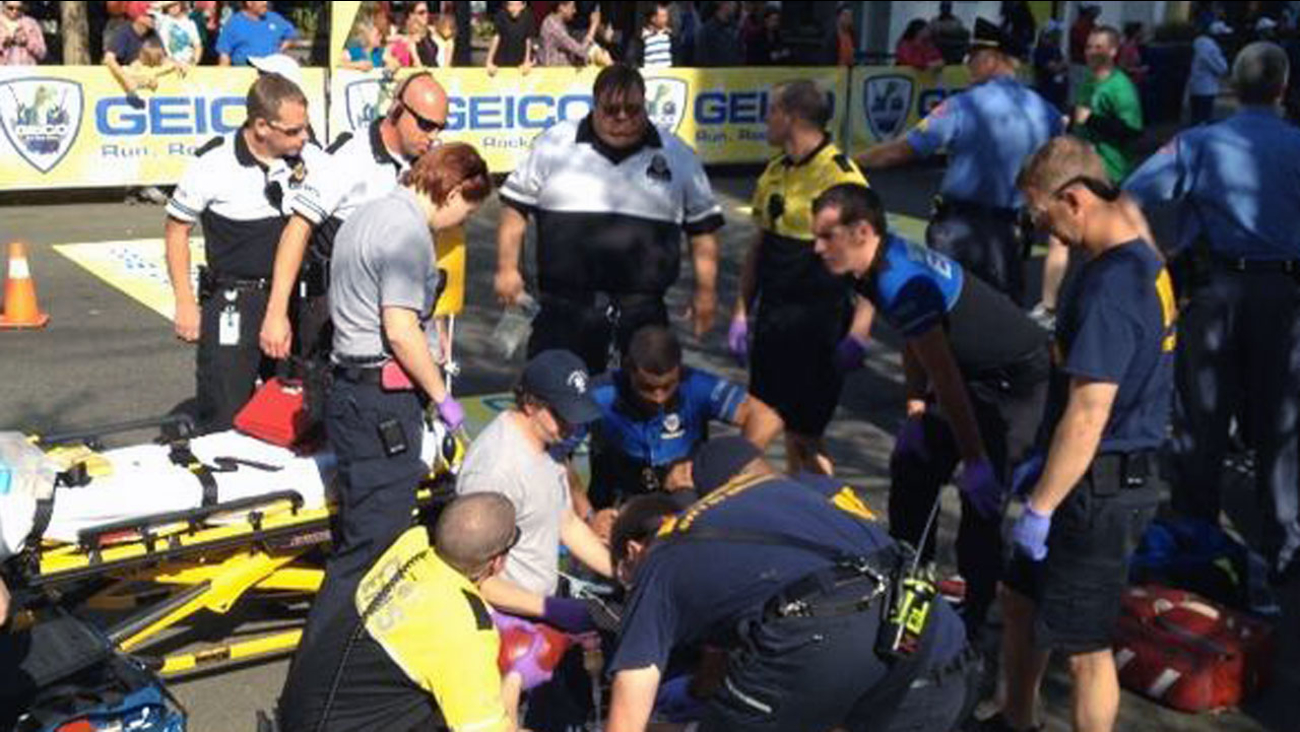 Officials said the men were relatively young and in great shape. One was 35 and the other 31. The men are both from the Triangle. Officials have not yet released the participants' names or causes of death.

On Monday, ABC11 learned Derrick Myers was one of the men who died. A close friend said Myers was an avid soccer player and in great shape by just about all measures.

"It really shocked us when we found out," said friend Dileep Dadlani. "He's in fantastic shape and that's why it was so shocking to see someone in the prime of their life just getting struck down by whatever the case might have been."

The medical examiner is investigating how he died, but doctors say most likely, he had a heart condition he did not know about.

One man collapsed right near the end on Fayetteville Street. Video shows paramedics trying to help him. An eyewitness said emergency responders performed CPR frantically - to the point where workers were rotated. The other man collapsed in-between the 10 and 11-mile markers. That's right outside of Jay Smith's apartment building.

"It was just kind of a chaotic scene," said Smith, who was walking out of his building when EMS was working to save the runner's life. He tried to get closer but the streets were packed. Thousands of spectators clogged city sidewalks as the race was underway.

"It was just crowded and people were milling around trying to figure out what was going on," Smith said.

The marathon said in a statement:

"Wake County EMS and medical personnel were immediately on the scene and attempted to revive each runner, but their efforts were unsuccessful. We are greatly saddened by these tragic losses and our prayers go out to the each of the runners' family and friends."

A race spokesperson said a representative spent the majority of the afternoon at the hospital with the families of the two runners to help them cope with the losses.

More than 12,000 runners from around the world hit the pavement Sunday morning. Two Triangle men beat out thousands from all over the world in both the full and half marathons, and a Triangle woman prevailed in the women's full marathon. They say even with the cool conditions for the run, they felt the strain.

"I was at mile 17 and I wanted to lay down on the ground," said men's full marathon winner Paul Himberger.

ABC11 spoke to a cardiologist at WakeMed who said while deaths at marathons are rare; they do tend to follow patterns. Men runners tend to go down more often than women, they often happen at the end of races, when people are pushing themselves and often trace back to pre-existing, and perhaps unknown heart conditions.

"Competitive running, there carries a small risk and it can be reduced by people living a healthy lifestyle. And if there are concerns about heart disease in the family, or symptoms, to have it checked out," said Dr. Vigil Wynia, with WakeMed Cardiology.

Wynia advices athletes to keep a healthy diet, watch for high blood pressure and diabetes, and talk to a doctor about their lifestyle.

In Myers' case that meant soccer and distance running, but that is not necessarily what Dadlani will remember about him.

"[He] always with a smile, lots of enthusiasm, lots of zeal for life and really, just lived life by the seat of his pants," Dadlani said. "He's not going to be forgotten by any means. He's a good guy and we're going to miss him."

Myers' death has left his friends and family heartbroken and confused. His funeral will be held at 11 a.m. Thursday at Englewood Baptist Church in Rocky Mount. Donations to help offset expenses can be made starting Tuesday at PNC Bank under the Barbara M. Myers custodial account.

The running club in Raleigh will have a moment of silence for both men Monday night.