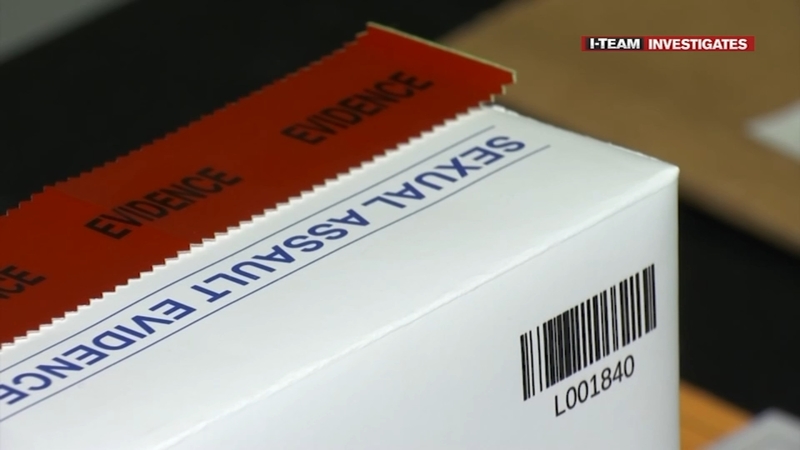 DURHAM, N.C. (WTVD) -- A woman was walking in north Durham when she was dragged off the sidewalk and raped. For more than a decade, the offender walked free.

The initiative has added specially trained sexual assault prosecutors and investigators to Durham and funds additional resources to test the more than 1,700 untested sexual assault kits the Durham Police Department reported in 2019.

Since the first conviction in May 2021, four more individuals have been convicted and ten others face charges.

"We've found serial rapists through this initiative and been able to bring their cases to court and all the way to a resolution for some cases and others were still pending," explained Assistant District Attorney Kendra Montgomery-Blinn. "Most of these survivors didn't think that their case would ever make it to court."

In 2010, a woman was walking alongside a man she knew when she was shoved into a ditch and raped. Her sexual assault kit wasn't tested for a decade. When it was tested, the evidence led the same offender, Michael Brooks, to plead guilty to second-degree rape in two other incidents that involved assaulting an elderly woman in her bed and raping a woman at knifepoint in 2016 and 2017.

Similarly, a woman was in the bathroom in the Duke University Medical Center when a man came up behind her and choked her. Months later, the same man would grab a woman walking on a trail, and choke and sexually assault her. The sexual assault kit sat untested for four years. When it did get tested it led to a conviction in both cases six years after the incidents.

It's cases like these that led North Carolina Attorney General Josh Stein to make it one of his top priorities to get the backlog of 16,000 sexual assault kits tested.

"It takes hours to do one of those examinations, and then that evidence sat on a shelf. It's just absolutely wrong for those folks, and we owe it to them to test those kits so that we can solve cold cases," Stein said." We're doing it, we're moving this forward."

Four years ago, North Carolina uncovered it had one of the largest backlogs in the country. Since that discovery, the state has funneled around $15 million and dedicated thousands of hours to clearing the backlog.

North Carolina lawmakers passed the Survivor Act in 2019. Part of that legislation involved mandating all sexual assault kits get tested. Under state law, the kits are required to be reported to law enforcement within a day. If the lab finds DNA that creates a hit in CODIS, the FBI's DNA database, police agencies are required to notify the lab around arrests and convictions.

Around 60% of the 16,000 kits are either already tested or in the process of getting tested.

More than 2,000 kits were able to be uploaded into CODIS, the FBI's DNA database. From there, around 40% led to 'hits', which means the DNA matched with a possible perpetrator in the system or links to another case.

Hits from testing these older kits have led to 61 arrests; arrests that wouldn't have been made if the kits continue to sit untested.

"My hope was is that by doing this work, we will be delivering justice for victims. We'll be making the public safer, and we will put dangerous people behind bars to hold them accountable for their terrible crime and that's what we are seeing," Stein said. "There's more work to be done."

At the same time that the state works to clear the backlog, new legislation requires all new kits to get tested as well. Vanessa Martinucci, the director of the State Crime Lab, said the lab has seen 125% more kits submitted since 2019.

"For several years, we have been getting in more submissions than we can complete," Martinucci said.

To handle both loads, the state is working with a lab in Virginia to process the older kits. The State Crime Lab has also been making adjustments to make its processes work faster.

Last year, state lawmakers also approved the budget for eight more workers in the lab. Still, it's averaging around a year and a half to get a single kit tested.

"There are a limited number of vendor laboratories that do the type of testing on the sexual assault kits," she explained.

A limited number of nationwide labs paired with high demand creates a long queue that delays potential justice for survivors.

"We are working to get these kits tested as quickly as we can. We do realize that there may be offenders out there who have committed additional crimes since the one originally from the kit that was tested," Martinucci said.

The state is aiming to completely clear the backlog by next summer.

Stein said that work will face some roadblocks.

"The whole criminal justice system has to deal with insufficient resources," Stein said. "There are shortages of local law enforcement, there is a shortage of prosecutors who are overburdened by the number of case files they have. So, it requires us working together and prioritizing these cases to make sure that when we've identified a potential perpetrator that investigation is carried out."

Montgomery-Blinn said even organizations that support survivors are feeling the strain.

"All of these agencies are underfunded and undersourced. Every single agency is dealing with a backlog of cases or more survivors that are ready for support then they have advocates that can help," Montgomery-Blinn said. "We do need more funding around sexual assault awareness and supporting survivors."

The team has received special training on sexual assault and victim trauma.

"We really are investing in having prosecutors who are victim-centered and trauma-informed and know the law. And we're investing in law enforcement officers who know how to treat victims, know how to collect evidence in these cases, and then we're going to take them all the way through," Deberry said.

Eighty-one percent of the untested sexual assault kits the Durham Police Department initially identified remain untested. A spokesperson for the department said testing was postponed for a while but 186 kits have been tested this year by a private lab.

In addition to getting older kits tested and cold cases solved, Deberry said she is striving to create an atmosphere where more victims feel comfortable reporting their assaults.

The Rape, Abuse & Incest National Network (RAINN) estimates one out of every six women and one out of every 33 men have experienced sexual assault in the United States. However, two out of every three assaults are estimated to go unreported, according to RAINN.

"Well, some of the barriers to getting people to come forward is really having competent staff who are trained to deal with victims, not just sexual assault, domestic violence and child abuse. And all of those things that can happen between people who know each other and so we really want to create here in our office, competent prosecutors who know the law and who are also trauma trained and have talked about their own trauma and dealt with their own trauma and know-how that really affects victims," Deberry said.

"I think that hearing their voice meeting them where they are and letting them tell us what they need is important. That's not something that the court system has always done. And I think we're sort of moving into a new frontier of respecting survivors respecting their wishes and knowing that they have a right to tell us what's best for them," Montgomery-Blinn said.

She also reminded individuals that if they are sexually assaulted and not ready to report it to the police, there is still help they can get. Survivors can complete a sexual assault kit and submit it anonymously and can reach out to the Durham Crisis Response Center or other support agencies.

"It's important for a survivor to know that the resources that exist for them exist for them, even if their case is not prosecuted, even if the conviction is not achieved. And even if they decide not to report to law enforcement, they can still seek the resources of any of the agencies that support survivors, including the Durham Crisis Response Center," Blinn said.