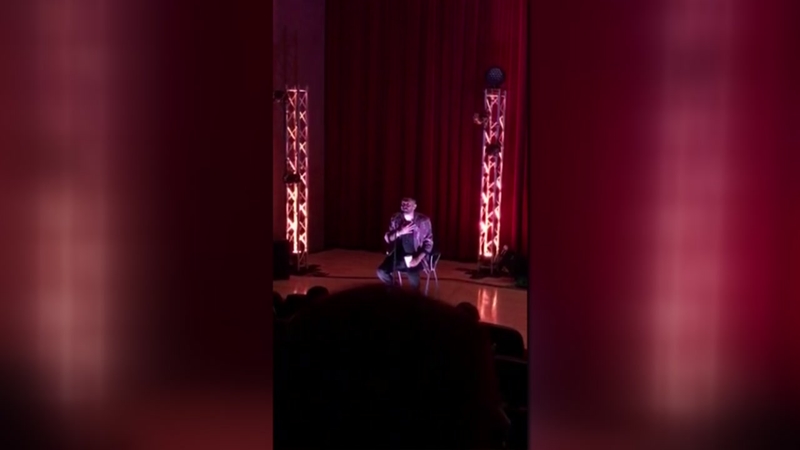 CHAPEL HILL, N.C. (WTVD) -- Some sponsors are asking for their money back and a congressman is seeking a government investigation after an anti-Semitic song was performed by a Palestinian rapper at a "Conflict over Gaza" conference at UNC-Chapel Hill last month.

In a scathing letter to leaders of the UNC Center for Middle East and Islamic Studies, which officially sponsored the event, UNC School of Law Dean Martin Brinkley said: "Due to your inclusion of conference content over which I had no knowledge or control, I have been forced to spend most of the last two days responding to outraged members of my own community who are ashamed and embarrassed to see the law school shown as a sponsor of what they consider hate speech."

"As the organizers, who I assume were present during the performance, I would have expected you to intervene and stop a performance that so obviously and painfully contravened campus norms and values, and that so undercut the cultural understanding that you claimed to promote," he wrote.

READ MORE: Full letter from the School of Law (.pdf)

UNC School of Government Dean Mike Smith sent a similar letter, saying: "It simply is wrong to defend this explicitly anti-Semitic performance under the cloak of academic freedom. It crossed a bright line and you should have the integrity to reject it and take responsibility for it."

READ MORE: Full letter from the School of Government (.pdf)

Both departments asked for a refund of the $500 they spent to sponsor the event.

UNC Global, which oversees The Center for Middle East and Islamic Studies and the event in question, sent this statement to ABC11 on Tuesday: "The center is in conversation with co-sponsors who have requested a return of their funds and the center is working directly with them."

North Carolina Congressman George Holding requested the federal government investigate the conference since it was taxpayer funded. Rep. Holding's letter to Betsy DeVos said: "It is irresponsible, immoral and unproductive for taxpayer dollars to fund overtly biased advocacy camouflaged as academic discourse." Liz Hill, press secretary at the U.S. Department of Education, said: "We have received the Congressman's letter and are reviewing it."

UNC Global said the conference budget was $46,110. In addition to the grant money, funds were provided by 27 units at UNC-Chapel Hill. There were also other sponsors, including The Rotary Club of Raleigh. President Dana Johnson sent this statement to ABC11:

"The Rotary Club of Raleigh is part of a network of culturally, ethnically, and religiously diverse members who in good faith believed that this conference, sponsored by the UNC Center for Middle East and Islamic Studies and the Duke-UNC Consortium for Middle East Studies, would facilitate conversations that embraced diverse perspectives on the Israeli and Palestinian conflict. We do not condone the events that took place during the conference and will never tolerate anti-Semitic language, beliefs or ideals."

Many thought the conference would provide diverse perspectives on the conflict in the Middle East.

"It's ugly and I can't think of a tasteful way with which one would joke about anti-Semitism," Gauss said. "That's the defense that's been put out there. And even if you think that's OK with a wink and a nudge, I don't think it belongs on a college campus and certainly not funded with public dollars."

"My first reaction, I think, is a bit of repulsion," said Sam Zahn, who is one of an estimated 1,000 Jewish undergraduates at UNC-Chapel Hill. "It's just so openly disgusting in my mind. It's school-sponsored anti-Semitism in the fact that it received so much federal money and it received the support of so many prominent academic departments at UNC."

Gauss said they brought up concerns before the conference but were told there would be no hate speech.

"I heard all of the speakers at the Gaza Conference and was disappointed, though not surprised, at the one-sided, unbalanced presentations with anti-Israel bias," said Marcia Harris, who attended the conference, in an email. "Many letters were sent and phone calls made to UNC and Duke administrators before the conference pleading for a more balanced approach, but they were ignored. Unfortunately, much damage has been done as a result."

UNC Global said:
"In the weeks prior to the conference, the University received inquiries about the program. In response, representatives of the University met with community leaders and communicated with concerned citizens. They listened to concerns and expressed the organizers' commitment to deepening an understanding of everyday life in Gaza and to setting a tone for the gathering that would promote the open exchange of ideas about a complex topic."

After ABC11 first reported this story last week, UNC Interim Chancellor Kevin M. Guskiewicz issued the following statement: A performance during a recent conference held on our campus contained disturbing and hateful language. Like many members of our community, I am heartbroken and deeply offended that this performance happened. I stand steadfast against Anti-Semitism and hate in all its forms. The Carolina spirit is not about hateful language that divides us, but about civil discourse that advances ideas and knowledge. We must continue to aspire together to that ideal.
Report a correction or typo
Related topics:
religion & spiritualitychapel hillrapperuncanti semitismhate speechjewish
Copyright © 2021 WTVD-TV. All Rights Reserved.
TOP STORIES
'We're not giving up:' Family searches for missing Sampson Co. woman
How do vaccines impact an area's risk for COVID-19?
Man arrested for stabbing woman in Wake Forest, police say
GOP filibuster halts Democrats' signature voting bill
US gives more asylum-seekers waiting in Mexico another shot
Queer Durham chorus promotes social justice through music
NC Infant-Toddler Program ready to serve kids missed amid pandemic
Show More
Proposed bill would allow NC schools to open as early as Aug. 9
Triangle LGBTQ advocates voice support after NFL player comes out
LATEST: $25 cash card program for vaccinations expands in NC
NC gas station sues Colonial Pipeline over ransomware attack
WEATHER: Rain, storms move through central NC
More TOP STORIES News