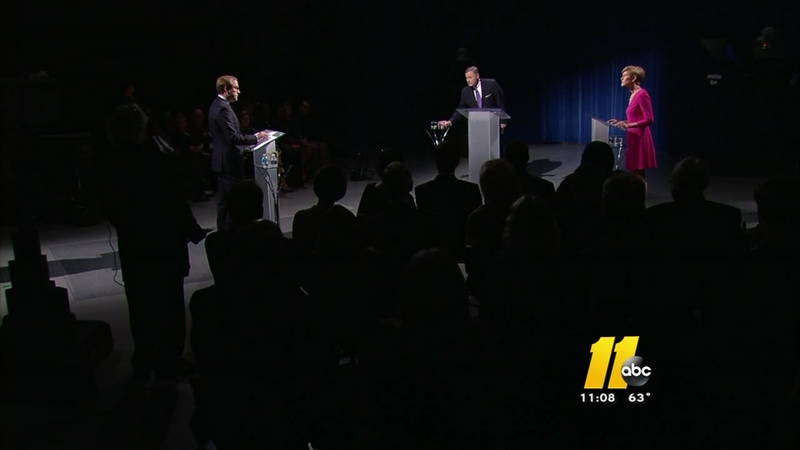 RALEIGH (WTVD) -- Washington was watching intently as the faceoff played out inside UNC-TV studios in Research Triangle Park. Democrats and Republicans have poured millions into this race between Republican incumbent Sen. Richard Burr and Democratic challenger Deborah Ross.

The GOP majority in the U.S. Senate hangs in the balance.

The debate moderated by ABC News Chief White House Correspondent Jonathan Karl drifted quickly into the hot-button state issue of the moment: What to do about House Bill 2?

Burr defended his support of HB2, which in part mandates that people must use public restrooms that match the gender on their birth certificate, but he also criticized the law as too expansive. Then, Burr pushed back against HB2 critics who argue the law is scaring businesses away and hurting North Carolina's economy and reputation.

Ross was forced to defend her record on the state's sex offender registry. She said she supports it and voted to toughen it while serving in the State House. But her previous time as a lobbyist is raising questions.

"Didn't you say this bill would make it harder to re-enter society and encourage vigilanteism? You were opposed to this bill," Karl asked Ross.

"Like a good lobbyist, lawyer, legislator, you have to look at the implications of a bill," Ross said.

It was a debate for U.S. Senate, but Hillary Clinton and Donald Trump loomed large.

"I'm not going to defend Donald Trump, what he said, or his actions. But when I look at our choice, it's not even close for me. I'm going to support my nominee," Burr said.

Ross, who has been at Clinton's side each time the Democratic nominee has campaigned in the state, was critical of Clinton, at the debate, over her use of a private email server while at the State Department.

"I want to be clear and it's on the record that I believe that the way Hillary Clinton handled her emails was inappropriate," Ross said.

As ABC News Political Director Rick Klein watched from inside the debate, he found the candidates' struggles with their own parties' presidential nominees glaring.

"I think both of these candidates are so uncomfortable with the top of the ticket," Klein said. "Those national issues start to cascade down."

ABC News currently rates the race between Burr and Ross as a toss-up. We'll know soon if this widely-aired debate moves the needle.