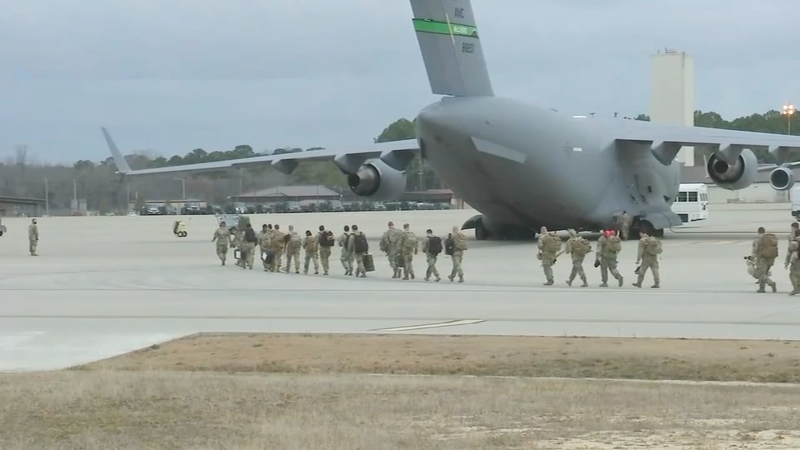 Raleigh Ukrainians hope for peace as tensions escalate with Russia

RALEIGH, N.C. (WTVD) -- As the United States and NATO allies warn of a possible military attack on Ukraine by Russia, the Triangle's Ukrainian community is hoping for peace.

"If there is a full-fledged invasion, you will have massive casualties, millions of refugees, the economy of the country will be destroyed. But everybody I talk to in Ukraine says we are not going anywhere. If push comes to shove, we are going to fight. And if there is a full-fledged invasion, there is going to be a very vicious guerrilla fight," said Oleh Wolowyna, the Vice President of the Ukrainian Association of North Carolina, referring to the disparity in military sizes between Russia and Ukraine

Wolowyna, a native of Ukraine, still has friends and family in the country and visits often. Earlier this month, the Ukrainian Association of North Carolina held a rally in support of Ukraine. According to Wolowyna, there are about 20,000 Ukrainian natives or direct descendants living in the state, with about 4,000 of those living in the Raleigh area, which accounts for the second-biggest concentration in North Carolina.

Russia's military exercises and positioning of both personnel and artillery have sparked international concern during the past several weeks, leading the US to send thousands of troops to Europe, many of which are from Fort Bragg.

In 2014, Russia annexed Crimea, a move that Wolowyna described as a significant shift in the relationship between the two countries.

"The effects of that invasion were really, really historical," said Wolowyna, who was in Ukraine during that period.

"He will engage, continue to engage in a hybrid war to destabilize the country to make sure it does not become a successful democracy, but there's a larger agenda. He wants to become a superpower again like the Soviet Union," Wolowyna said.

Ukraine's Cyber security agency reported that a cyberattack took down multiple government websites, including those belonging to its Ministry of Defense, Armed Forces, and two state banks.

Russia has continued to deny it has plans to invade, accusing the U.S. of causing mass hysteria, and has stated it has drawn troops back. However, NATO intelligence has disputed the latter claim, stating it has not seen independent evidence of a pullback.
Report a correction or typo
Related topics:
politicsraleighrussiaukraineimmigration
Copyright © 2022 WTVD-TV. All Rights Reserved.
TOP STORIES
New NC flood monitoring system ready for next big storm
Homeless veterans get an assist from Durham's Rotary Club
Shelf cloud seen in Raleigh ahead of line of storms
Truck slams into NC woman's new home
Father puts 1,000 miles on his car to find specialty formula
Student says he was told not to mention 'Don't Say Gay' law in speech
Clayton police arrest man in shooting that injured 1
Show More
More than 75,000 pounds of baby formula lands in US amid shortage
Report: Top Southern Baptists stonewalled sex abuse victims
Arby's is selling a fast-food staple it's never offered before
Biden: US would intervene with military to defend Taiwan
Wake County begins giving COVID booster shots for children ages 5-11
More TOP STORIES News