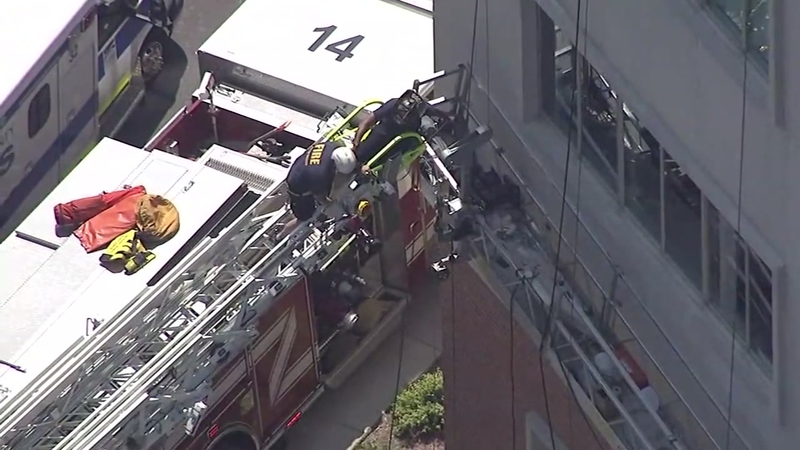 RALEIGH (WTVD) -- Two men were rescued after a portion of limestone broke from a wall on Raleigh Thursday afternoon.

It happened around 11:30 a.m. at a building near the intersection of Wade Avenue and Daniels Street.

State officials told ABC11, "Based on preliminary information concerning the scaffolding incident, three employees were working on a suspended scaffold system to upgrade and repair the expansion joint on the wall of a commercial building located at 1001 Wad Avenue. Part of the limestone wall facade broke free and fell from about 20 to 25 feet above the employees."

"I figured somebody slipped and dropped a tool because a lot of times you hear stuff like that," Keith Kornegay said. Kornegay was inside the building installing a phone system when the limestone fell.

"I heard a loud noise and saw some rocks falling off and hitting the ground and I came around the corner. I didn't want to get hit by anything. And I looked up and there was a guy on the scaffolding and he was not moving," Jeff Iorio said. "His coworker came over and there was a large piece of slate that had come off of the building. His coworker picked it up and moved it off of him but he wasn't moving at the time."

Both men were taken to the hospital.

One patient was transported with serious injuries, the other had minor injuries.