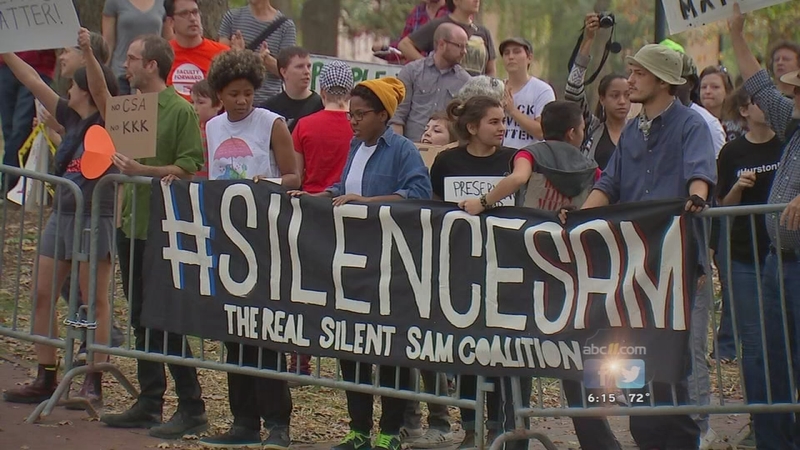 CHAPEL HILL, N.C. (WTVD) -- The Silent Sam statue at UNC Chapel Hill was the scene of a protest Sunday afternoon.

We honor a beautiful monument that carries the names of those from the great state of North Carolina that fought and stood against tyranny and gave the ultimate sacrifice. Those rebels are the ancestors of us all and we will stand together and honor them.

Silent Sam was erected in 1913 as a memorial to the UNC students who died in the Civil War.

The Black Student Movement at UNC said in a statement:

We are incredibly disappointed and against the anti-Black, racist, and xenophobic group, Alamance County Taking Back Alamance County, coming to our campus today, Sunday October 25th to rally in support of Silent Sam.

Silent Sam has been the target of vandalism and protest numerous times this year already.

In July, it was spray-painted with "Murderer" and "Black Lives Matter" on the base of the monument, while in August, someone spray-painted the words "Who is Sandra Bland?"

Someone put a confederate flag blindfold on the statue in September, but the school did not consider that an act of vandalism.

On Oct. 12, students held a rally to remove the statue, saying it is an insult to black slaves who built the original UNC campus.