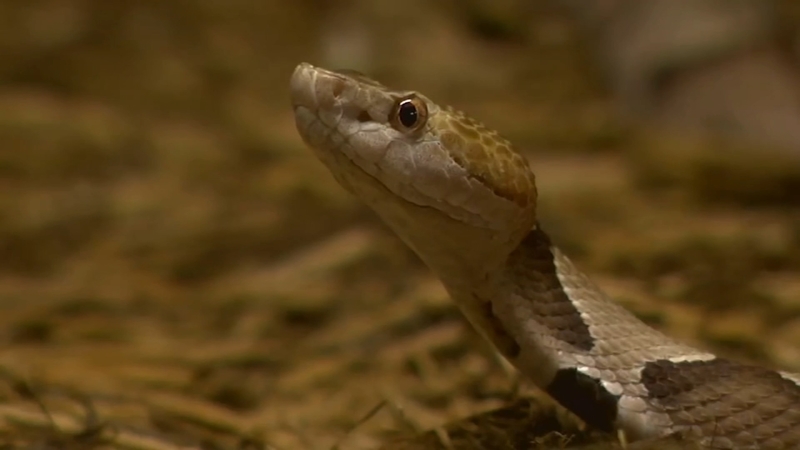 As more people venture outside due to the COVID-19 pandemic, more snake bites are being reported across the US.

"(It's) the most we've ever had in recent memory," said Dr. Benjamin German, a WakeMed physician.

In an ABC News report, Dr. Alexander Garrard, director of medical affairs for BTG Specialty Pharmaceuticals, said more people are hitting the hiking trails this summer, especially in the early mornings and evenings when it's not quite as hot. However, Garrard said those are peak times for snake activity as well -- and more people are getting bitten by venomous snakes.

Data from UNC Health and Duke Health show that more people are getting bit by venomous snakes in the Triangle as well.

Dr. Charles Gerardo, the chief of the division of emergency medicine at Duke University Hospital, said his department has treated more than 20 bites this summer--some extremely serious. A representative for Duke Health also said this year is "on track" to be a high season.

A UNC Health spokesperson told ABC11 they also have seen a slight increase in snake bite cases this year, stating they've seen more than 30 snake bite patients at the UNC Medical Center Emergency Department in Chapel Hill and about 20 at UNC Rex in Raleigh.

RELATED: What to do if you get bitten by a snake

Dr. German believes the increase could be due to an increase of factors, ranging from population growth to expansion into rural areas, and even people staying at home due to the COVID-19 quarantine.

"Looking at the numbers we've already seen close to 100 cases looking at May and June alone," Dr. Moyle said.

Signs that your pet has been bit include lameness, a limp, swelling, or bruising as well as an initial cry immediately following the bite.

Both doctors stressed the importance of being aware of your - and your animal's - surroundings.

"I think the most important thing is just keeping your dogs close to you at all times. Keep them on that shorter leash. Keep an eye out on the trail. Always be scanning the trail, especially the sides of the trail," said Dr. Moyle.

Lexie Nuell, a mother of three in Raleigh, said she's seen snakes in her backyard in the past. It's why she makes sure her children always wear shoes whenever they're in the grass.

"We had an issue last summer with baby copperheads that would hide in tubes or anything rolled up in our carport. Now that we have a toddler in particular, I worry a lot about where she's stepping and keeping our grass extra short," Nuell said.

Dr. German said people can protect themselves by wearing boots or leather gloves when working around the house or gardening.

"If you want to keep snakes out of the yard, make sure you make it the least hospitable environment for them. So keep everything trimmed well, don't leave things lying around they can hid under," said Dr. German, who added snakes are primarily active early in the morning or late in the evening.

If you or your animal is bit, it is important to seek medical care immediately.

"There's really nothing you can do at home to make an envenomation better. There's a lot of things you can do to make it worse. So the old measures of cutting the wound, applying suction, putting on a tourniquet, are bad ideas," said Dr. German.

"There's not much that can be done specifically at home or any first-aid measures necessarily that are helpful. The most helpful thing is to take them to a veterinarian to see if this is a bite that requires anti-venom," said Dr. Moyle.

Fortunately, Dr. German said copperhead bites are rarely fatal in humans. However, they can have several consequences on a person's limb functionality.

According to data from the Centers for Disease Control and Prevention, between 7,000 and 8,000 people are bitten by venomous snakes every year. Approximately five people die every year from those bites, and between 10 and 44% suffer permanent injuries or disabilities, such as loss of a finger.
There are six poisonous snakes common to North Carolina--the copperhead, cottonmouth, the eastern coral snake, eastern diamondback rattlesnake, pygmy rattlesnake, and the timber rattlesnake. While the copperhead is widespread throughout the state, according to NC Poison Control, the cottonmouth is more prevalent east of the Triangle. All three rattlesnakes and the eastern coral snake are mostly found in the Sandhills and along the South Carolina border, however, the timber rattlesnake is also found in western and eastern parts of the state.

According to the North Carolina Museum of Natural Sciences, the copperhead, cottonmouth and all three rattlesnakes are "pit vipers," meaning they have long fangs and a distinguishing heat-sensing pit between their eyes. The Eastern coral snake, however, looks more like a non-venomous snake and is more related to cobras and mambas.
Both the Eastern diamondback rattlesnake and the Eastern coral snake are endangered and considered extremely rare. The other two rattlesnakes are considered "of special concern," meaning that the population is threatened because of loss of habitat. On the other hand, copperheads and cottonmouths are very common and can be found both in wooded and residential areas.

Veterinarians in Australia pulled a beach towel out of a pet snake.