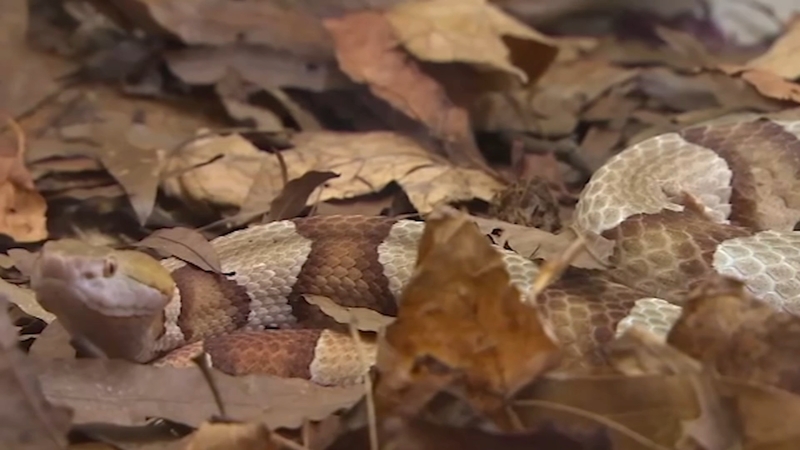 Maintaining snake safety as we slither into snake season

RALEIGH, N.C. (WTVD) -- Though the Triangle area is a few months away from what experts consider snake season, local residents may have questions about protecting their family from harmful snakes and determining which are actually harmless.

According to Bryan Smith, the owner and operator of Advanced Wildlife Removal L.L.C., copperheads remain the predominant venomous snake posing a risk to those in the Triangle. They can be identified by their distinct markings and their copper-tinted heads serving as their namesake.

"The copperheads have a very unique pattern to their back, and some people will say an hourglass pattern - but a light brown, almost a burnt orange color to a dark brownish," Smith said.

According to Smith, although copperheads will never seek out an attack if not threatened, they easily camouflage and can blend in with their surroundings making them easy to stumble upon by accident.

"It's common for people to be gardening with their hands, pulling back shrubs and stuff, moving firewood. And that's where accidents happen and they get bit," Smith said. "It's never the snake coming toward people or trying to bite them."

Smith recommends residents ensure their homes and crawl spaces are sealed to prevent entry. Residents can also maintain areas around homes and yards to make them less appealing to snakes while keeping a watchful eye over pets and children.

"Working on habitat management around your home, around your areas that you're spending time in in the afternoons, around your backyard, keeping the firewood piles to a minimum, keeping your cover - your leaf piles and English ivy and pine straw - all that to a minimum will help you to avoid encounters with snakes," Smith added.

Smith says some snakes may look similar to copperheads including northern water snakes and adolescent black snakes. He advises maintaining a safe distance from all snakes to avoid this potentially dangerous confusion.

"It's safe to stay away from all snakes because an adolescent black snake will have a bit of a pattern on his back. He's not completely dark. Sometimes it can get confusing. A Northern water snake is going to have that same pattern. It's not as definitive and light-colored as a copperhead." Smith said. "But basically if you stay away from the snakes they're not going to bother you, they're never going to come to you."

Another way to differentiate between snakes is location and time of day. Northern water snakes are also found in or around water and are usually active during the daytime. In contrast, copperheads are generally nocturnal and may be active during dawn and dusk.

Due to habitat loss and increased building and development in the area, many snakes are being driven out of their natural habitat, which is why they may come in contact with humans or try to relocate in or around homes and other structures.

"It's important to note that snakes were here long before us," Smith said. "And a lot of times, they're losing habitat every day. So there's more and more run-ins with people, especially in this North Raleigh Crabtree Creek area."

When coming across a snake, Smith suggests simply waiting for it to leave. If individuals still want the snake removed, he said they can call a wildlife removal service like his or others in the area.

Smith does not recommend killing snakes, including harmful ones like copperheads.

"There's a negative connotation around them - I understand that - in the public," Smith said. "So that's why there are services like mine to come help people remove them when they don't want them there. But usually, if you give him some space, he's just gonna move on."

According to Smith, summer is the main time to look out for snakes, with copperheads becoming most prevalent in the late summer and early fall.

During the spring months, people in the Triangle area are more likely to deal with problems relating to animals like squirrels and raccoons.

Despite losing part of his thumb to a copperhead at the age of 5, Smith said he has always had a passion for wildlife.