One month ago he lost his wife to cancer. Now this Chapel Hill firefighter is battling his own rare cancer. 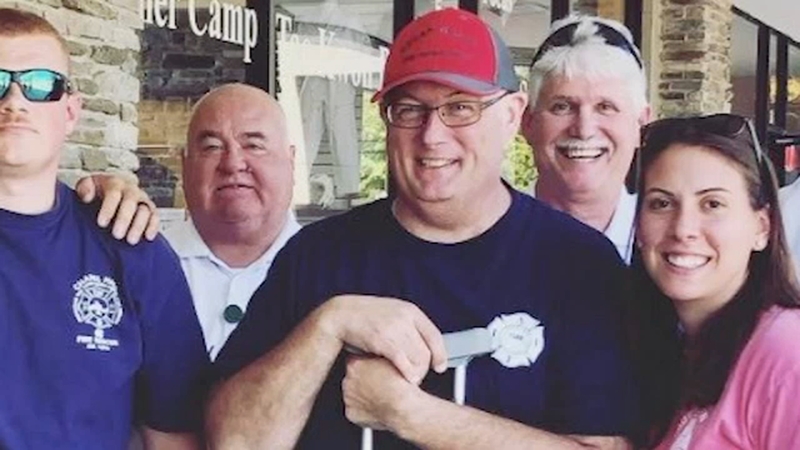 CHAPEL HILL, N.C. (WTVD) -- Behind the wheel for the Chapel Hill Fire Department, that's where Jimmy Lambert has spent the last 15 years answering the call, driving toward fires and putting them out, helping people in their time of need; now, it's his time.

"One of the things that strikes me about Jimmy is, is that even after his diagnosis he fought to come back to work and wanted to work," said Matthew Sullivan, Chief of the Town of Chapel Hill Fire Department.

But Sullivan said the aggressive chemotherapy treatments, radiation and the recent loss of Lambert's wife Tracy are now keeping him away from the job he loves.

His bride lost her battle with cancer one month ago. In January of this year, Lambert found out he'd be facing his own cancer fight.

"We remember hearing him talking about the lump he had behind his thigh," said Phillip Nasseri, Chapel Hill firefighter. "It was kind of surprising. They did the biopsy and it came back - and it was like what? You have cancer? That can't be possible. Your wife has cancer."

His brothers and sisters in the fire service have been rallying around Lambert - a now widowed father of two with pleomorphic liposarcoma, a rare cancer.

Proceeds from the First Annual Orange County Firefighter's Bash Against Cancer will support Lambert and someone else next year.

"We hope no one ever needs it, but unfortunately, we know that the truth is - as this goes on, only more and more are gonna need it," Nasseri said.

House Bill 520, known as the Firefighters Fighting Cancer Act, is sitting in a Senate committee. It's only the latest attempt at getting state compensation for firefighters who get that dreaded diagnosis, something Sullivan said is an occupational disease.

Sullivan said Lambert will be at the Firefighter's Bash on Friday.

"It helps bring awareness to this serious issue with firefighter cancer that we really need to get ahold of and ahead of to figure out how best can we support the heroes in our communities that come in every day and put their lives on the line," Sullivan said.

The First Annual Orange County Firefighter's Bash Against Cancer is Friday Nov. 1 from 6 to 10 p.m. in the Courtyard of 140 W. Franklin Street in Chapel Hill.