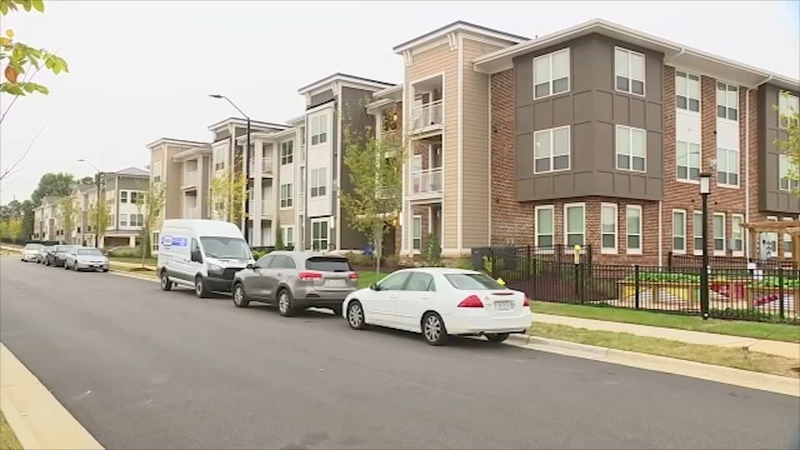 RALEIGH, N.C. (WTVD) -- The Downtown Raleigh Alliance's quarterly report highlighted the continued economic growth throughout the area, as the city prepares for additional businesses in the coming years.

"We have $666 million in construction right now. Of particular note, having more than 900,000 square feet of office space under construction is unusual," explained Downtown Raleigh Alliance President and CEO Bill King, who added that there have been 35 new storefront businesses to open this year.

New businesses and expanded space mean more employees downtown and thus a greater emphasis on property in and around the area. For a renter like Bryan Lendzian, who lives near Shaw University, that has meant preparing to again move.

"You can't stop money. When you have developers moving in here with millions of dollars, and they're quietly buying up these places," said Lendzian, who moved after he said he was priced out of Cary.

Lendzian said beginning this month, he is now on a month-to-month rent, a change he said he believes is because of the property owner wanting to be prepared for a potential sale.

"You know it's inevitable. So we're looking, we're saving as much money as possible," Lendzian said.

A block away on Blount Street, new construction is already underway.

"There's been folks that I've seen walk down this road each and every morning when I first moved here. They're no longer here - they're gone. Those houses have been purchased or boarded up. And they've been pushed out to God knows where," Lendzian said.

The North Carolina Housing Coalition reports 24 percent of Wake County households are cost-burdened, meaning more than 30 percent of their family's budget is spent on housing.

"Increasingly, housing has risen on the list of priorities for companies looking for places to move," explained Samuel Gunter, the Executive Director of the North Carolina Housing Coalition.

Gunter said he believes the high-paying jobs and economic activity seen in both downtown Raleigh and downtown Durham are exciting but come with challenges.

"It becomes a much greater challenge for folks to be able to afford to live in the places they've lived, and live near where they work," Gunter said, while describing existing residents.

A September report by Zillow found the typical home in the Raleigh metro area is up 5 percent year-over-year, with rents up 2.2 percent. Conversely, bottom-tier inventory, described as more affordable starter homes, fell 13.4 percent.

"I think it's really important to be able to have a diversity of housing types in the downtown area so we can have all types of employees who work nearby," said King.

Housing affordability was a major topic during the most recent mayoral and city council races, and city officials pledged to add 5,700 affordable housing units in southeast Raleigh during the next decade.

One of the more recent projects is the Washington Terrace Apartments, which includes 162 affordable units, for those with household incomes at or below 60 percent of the area median income.

"There's going to be a lot of solutions that will require both the city to step and do, and the private sector step up and do. That's the only way I can see being able to expand options in the housing market so we can accommodate everybody," King said.
Report a correction or typo
Related topics:
societyraleighbusinesseconomyaffordable housing
Copyright © 2021 WTVD-TV. All Rights Reserved.
TOP STORIES
Police: SUV that hit bridge near Capital Blvd, killing 5, was stolen
Raleigh woman who survived H1N1 flu, COVID-19 encourages both vaccines
LATEST: NC preparing to vaccinate children in early November
Garner PD Interim Chief on school threats: 'You're gonna get caught'
Jury selection resumes slowly in Ahmaud Arbery slaying trial
Myeloma patients around Triangle react to Colin Powell's death
Show More
Leave or else: Vacationers threatened by rental home neighbors
Durham man who drowned in Falls Lake identified
Top doctors deem children's mental health a 'national emergency'
Wanted: 80,000 truck drivers to help fix the supply chain
Wake mother and son advocate to end domestic violence cycle
More TOP STORIES News