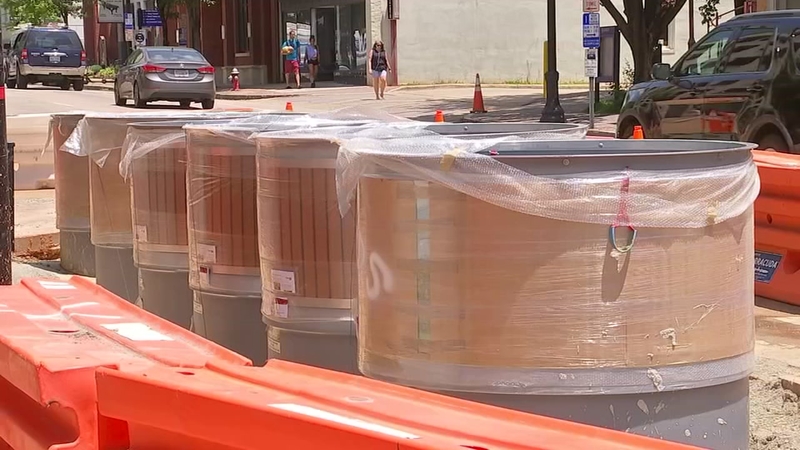 RALEIGH, N.C. (WTVD) -- People walking and driving through a busy downtown Raleigh intersection are rubbernecking in wonder at the Molok containers going in the ground.

The six high-capacity, underground waste collection containers are situated in what was previously a no parking zone on South Wilmington Street at Hargett Street.

City crews closed Wilmington Street overnight Sunday to begin installing the containers. The left lane of Wilmington Street will stay closed for the rest of the week and is expected to reopen Saturday, weather permitting.

The city launched its 'Dump the Cart' campaign in response to results from a 2018 Downtown Cleanliness Survey in which the city's 500 unsightly garbage carts, which are permanently parked on sidewalks, were identified as the top concern.

Employees will begin tossing their trash and recycling in the giant containers from Molok North America.

The city said one Molok, which is 60 percent underground, will hold the equivalent of about 20 garbage carts.

Stan Joseph, Raleigh's Solid Waste Services Director, said the Moloks will improve the quality of life while saving the city money and helping the environment -- cutting down on the time trucks and crews are on the street.

Jospeh said the city's Sustainability Fund along with private donations is paying for the containers and the cost of modifying trucks with a hook to lift the bags out of the five-foot deep Molok wells.

"It's one continuous piece of plastic so there are no seams, no cracks, no air pockets," Corcoran said.

The top of the containers, which are visible above ground, will be wrapped with artwork commissioned by local artists: Autumn Cobeland, Lincoln Hancock, and Jermaine Powell.