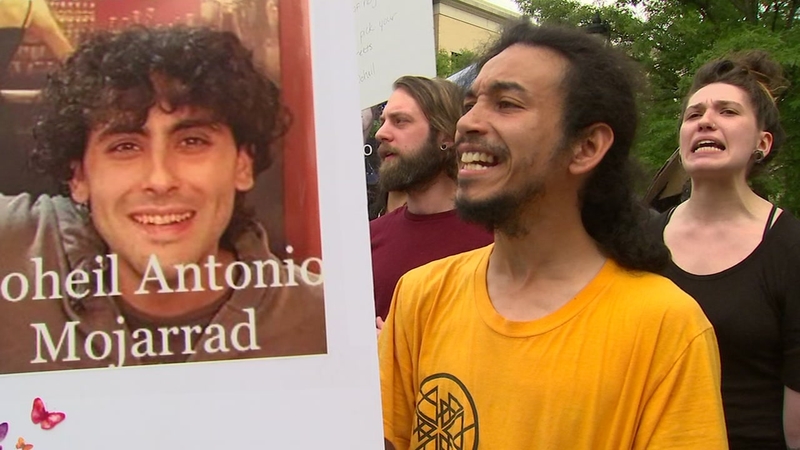 The release of the report comes one day after friends and family gathered to ask for transparency in the shooting.

The report alleges that Mojarrad held a knife in a threatening manner and repeatedly advanced toward the officer before he was shot.

According to the report, at 8:30 p.m. on Saturday employees of the Sheetz gas station located at 5200 New Bern Avenue called 911 to report that an individual who had been asked to leave the business had returned.

At about the same time, senior Raleigh Officer W.B. Edwards pulled into the parking lot of the gas station to put fuel in his patrol vehicle.

Officer Edwards then got out of his patrol vehicle and told Mojarrad to stop. "The individual ignored Officer Edwards and continued to walk away," the report says.

When Officer Edwards continued to give him commands to stop, the report says Mojarrad turned around and began screaming obscenities at the officer while waving his hands around.

"Officer Edwards tried to calm him down and told him he just needed to speak with him," the report says. "Mr. Mojarrad continued to scream at Officer Edwards, who was standing less than twenty feet away."

The report says Mojarrad then "pulled a folding knife from his pants pocket and flicked it open as he raised it to head level."

A statement from the family's attorney, Cate Edwards of Edwards Kirby law firm, said Mojarrad was shot eight times. The attorney said the majority of those bullets did not strike the front of Mojarrad's body.

"There is no indication from the report issued by the Raleigh Police Department, or from the initial evidence we have collected, that this situation required or authorized the use of deadly force. It is also evident that some of the information contained in the preliminary police report is inaccurate. For example, the majority of the eight gunshots that hit Soheil did not enter through the front of his body. Officer Edwards does not appear to have followed proper procedures, including the activation of his body camera and the appropriate escalation of force. The officer was unjustified in shooting Soheil, and this young man unnecessarily lost his life." --Cate Edwards

"It was a couple shots at first, like he said, about 3 or 4 shots," said Hamza Hazin, who lives right by where the shooting took place and works in the shopping center. "A couple seconds later, it just, it was continuously after that, the shots."

Officer Edwards was wearing a body camera but it was not activated, so it did not record any video. His patrol vehicle was equipped with dash cam, but police say it was facing away from the scene of the shooting and also did not capture any video of the incident.

The North Carolina State Bureau of Investigation and the Raleigh Police Department requested video taken from private security cameras in the shopping center, but police say none of the cameras recorded the shooting.

During an event Wednesday, advocates wondered if there was another way to deal with the man with known mental illness. His family said he was hit by a pickup truck in Asheville seven years ago and suffered brain trauma from that. That's in addition to the mental illness he was already battling, friends said.

Dawn Blagrove, of the Carolina Justice Policy Center, said she believes a lot could've been done before deadly force was used.

"If you or I were to shoot someone who was holding a knife -- in this case a small pocket knife -- we would be charged with at the very least involuntary manslaughter and at the worst second-degree murder," Blagrove said.

Blagrove said she's tired of talking about police accountability with no action.

"I think there needs to be a paradigm shift in the community and in the local law enforcement community about that narrative," Blagrove said. "We can no longer assume that all law enforcement officers are being honest and forthright with what has happened when there's no video evidence."

ABC11 found several charges on Mojarrad's record dating back a decade. In two cases, he was accused of assaulting an officer.

In 2018, according to a citation, Majarrad kicked a Cary police officer in the neck. That officer wrote in the comment section he was "more interested in treatment than conviction" and thought Majarrad "needs help."

Mojarrad's family released the following statement Thursday: "We continue to grieve the loss of our beautiful son and brother. Soheil wanted the best for himself and everyone, and would never intentionally want to hurt anyone. Sadly, like many others, he suffered from mental illness. He was an incredibly good person. We believe he died a wrongful death, and will continue to fight for justice on his behalf. We are sincerely grateful for those who have shown us so much compassion during this difficult time."

The family's attorney said in a statement: Officer Edwards does not appear to have followed proper procedures, including the activation of his body camera and the appropriate escalation of force. The officer was unjustified in shooting Soheil, and this young man unnecessarily lost his life."

ABC11 requested information from Raleigh Police Department about training for officers in dealing with people with known mental health issues.

Spokesperson Donna-Maria Harris directed us to Department Operating Instruction (DOI) 1109-12. ABC11 reviewed the documentation, however, it doesn't mention anything about use of force, other than saying "necessary force may be used to prevent serious injury or death in persons believed to be dangerous to themselves or others."

Harris also said that, included with the DOI, is a training component for officers and civilian employees who, during the course of performing their duties, may have to assist or deal with persons who are mentally ill or developmentally disabled. She said the training is provided at the entry level during Basic Law Enforcement Training, with documented refresher training provided at least every three years

In addition, Harris said 390 Raleigh police officers have successfully completed a 40-hour Crisis Intervention Training (CIT) course. She did not say whether Officer Edwards was included in that count.

ABC11 also looked into the department's body camera policy. It states that body worn cameras should be "activated to record as soon as feasible during all contacts involving actual or potential violations of the law" including the following situations: "in progress" calls for service, unlawful disturbances or disorders, calls involving subjects experiencing an emotional or mental health crisis, incidents involving weapons or violence, when obtaining consent to search a person, vehicle, residence, building or other location, property or personal item, during all warrantless searches of individuals, vehicles, buildings, and other places, during the initial inventory of seized money and when directed to do so by a supervisor.

Additionally, if not activated initially, it states that the camera should be activated "to record any encounter that becomes adversarial after initial contact or in any situation that the officer believes its use would be appropriate or valuable to document the incident or encounter."