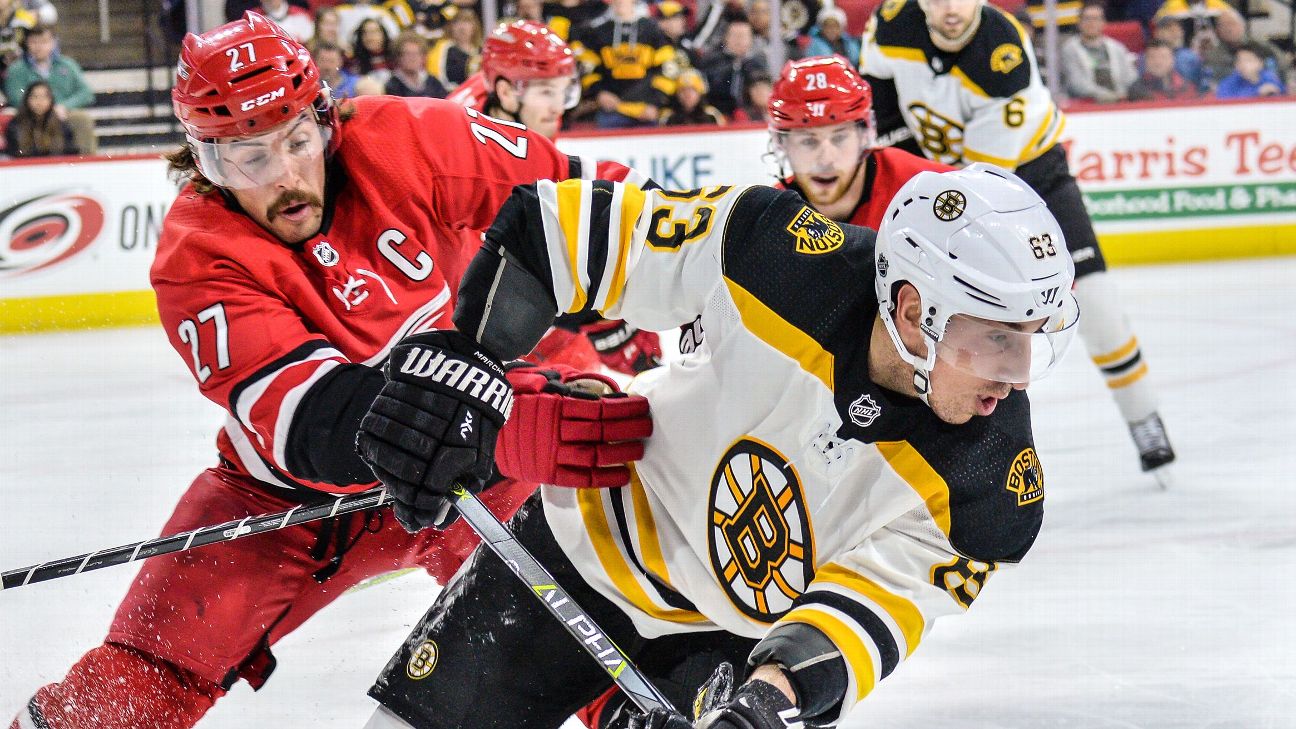 The Carolina Hurricanes don't always make the playoffs, but when they do, they go on big runs. Since the NHL's current playoff system was instituted in the 2013-14 season, the Hurricanes are only the second wild-card team to advance to the conference finals, joining the 2016-17 Predators... who went to the Stanley Cup Final.

The Canes are the big disrupters in the NHL this season. They spent year after year as everyone's Cinderella pick, and finally, they're at the ball again. Carolina has spent only 78.6 percent of the salary cap, which is the lowest of any conference finalist in the past eight years -- by far (the next closest is the 2012-13 Los Angeles Kings at 93.2 percent). They're also having a ton of fun and galvanizing the fan base. Their postgame storm surge celebrations irked some (well, specifically one) in the old guard of hockey media, earning their nickname as the "Bunch of Jerks."

If you don't root for Boston and you're sick of the city's professional sports teams' success -- well, you're not in luck. The Bruins are in the Eastern Conference finals for the first time since 2013, making it Boston's 28th appearance in aconference final in the four major sports since 2001. The next-closest city? Los Angeles, with 19.

What's more: The Celtics, Patriots and Red Sox have all appeared in the conference/league championship round in the past year, with the Red Sox and Patriots winning titles.

The nucleus of Boston's team looks a lot like its 2013 team, which lost to Chicago in the Stanley Cup Final. The Bruins' core isn't getting any younger, and though they were able to retool on the fly, this might be the best chance for Zdeno Chara, Patrice Bergeron, David Krejci, Brad Marchand, Tuukka Rask, et al, to win another championship.

First line:Marchand, Bergeron and David Pastrnak were quiet to begin the second-round series against the Blue Jackets. And then -- reunited, perhaps for good these playoffs -- they started roaring, combining for 11 points over a two-game stretch. The Hurricanes have done some shuffling to their top six, with budding superstar Sebastian Aho as the constant at center. Depending on whom he lines up with (some combination of Teuvo Teravainen, Justin Williams, Warren Foegele and Nino Niederreiter) the Canes can present a very good top line, but not one that can exceed the talent and versatility of the Bruins'. Advantage: Bruins

Depth: In Carolina, Foegele has been a breakout star; even though he was a fringe roster add and could have used some minor league seasoning at times this season, he's here to stay and has performed (five goals, four assists in 11 playoff games). Carolina has been balanced; seven players have at least three goals this postseason. Meanwhile, Boston has benefited from surprise secondary scoring. David Krejci, in his age-33 season, is quietly having a strong spring, with 10 points through 13 games. The bottom six have chipped in more than expected. Trade deadline acquisition Charlie Coyle (slotted at third-line center) looks like the best version of himself, and he was at times the team's best forward in the Toronto series. Advantage: Even

Defense: The Canes' blue line is deep enough to withstand the season-ending injury to Trevor van Riemsdyk and not miss a beat. It's a talented group. Jaccob Slavin, in particular, is having an excellent postseason, especially offensively, as he leads the team with 11 points. Boston's blue line has been formidable, and the playoffs have been a coming-out party for Brandon Carlo, who, on most nights, is the Bruins' best defender by far. A big issue for Boston is the Game 1 suspension of Charlie McAvoy for his hit to the head of Josh Anderson in Game 6 of the series against Columbus. The Bruins surrendered a lot of shots to the Blue Jackets, and they'll be without a key cog for the series opener. Advantage: Hurricanes

Goaltending: Tuukka Rask is playing some of the best hockey of his life. He had a .955 save percentage at even strength in the last four games of the Blue Jackets series, also stopping 26 of 27 high-danger shots (for a .963 save percentage) at even strength in that span. The Canes have two very capable goaltenders in Petr Mrazek (who started most of the playoffs) and Curtis McElhinney (who closed out the Islanders series when Mrazek was injured). They both have the capacity to lock in and steal a game, but neither is on Rask's level right now. Advantage: Bruins

Health: The Canes lost defenseman van Riemsdyk to season-ending surgery. They welcomed back Andrei Svechnikov last round (concussion protocol after Alex Ovechkin fight) but played the entire second round without rugged forward Micheal Ferland. It's unclear when Ferland will come back, but it could be soon. Jordan Martinook is also managing an injury. Bruins defenseman Kevan Miller (knee) has made progress, but he won't be available in time for Game 1. Miller has yet to play this postseason. John Moore is also managing an injury. Advantage: Bruins

Special teams: Boston's power play is clicking, hitting at a 28.6 percent clip, best of any playoff team. The Bruins' penalty kill is average (83.8 percent). Carolina's penalty kill has struggled at times (75.0 percent), but the power play needs a lot of help; the Canes have just four goals in 38 opportunities this postseason (10.5 percent). Advantage: Bruins

Coaching: Bruce Cassidy has made the right tactical moves at the right times to keep his lineup in check and clicking. Rod Brind'Amour is a rookie head coach, but his confidence and emotional connection to this team is hard to ignore. Advantage: Even