Carolina Hurricanes 2019-20 season preview: What do the 'Bunch of Jerks' do for an encore? 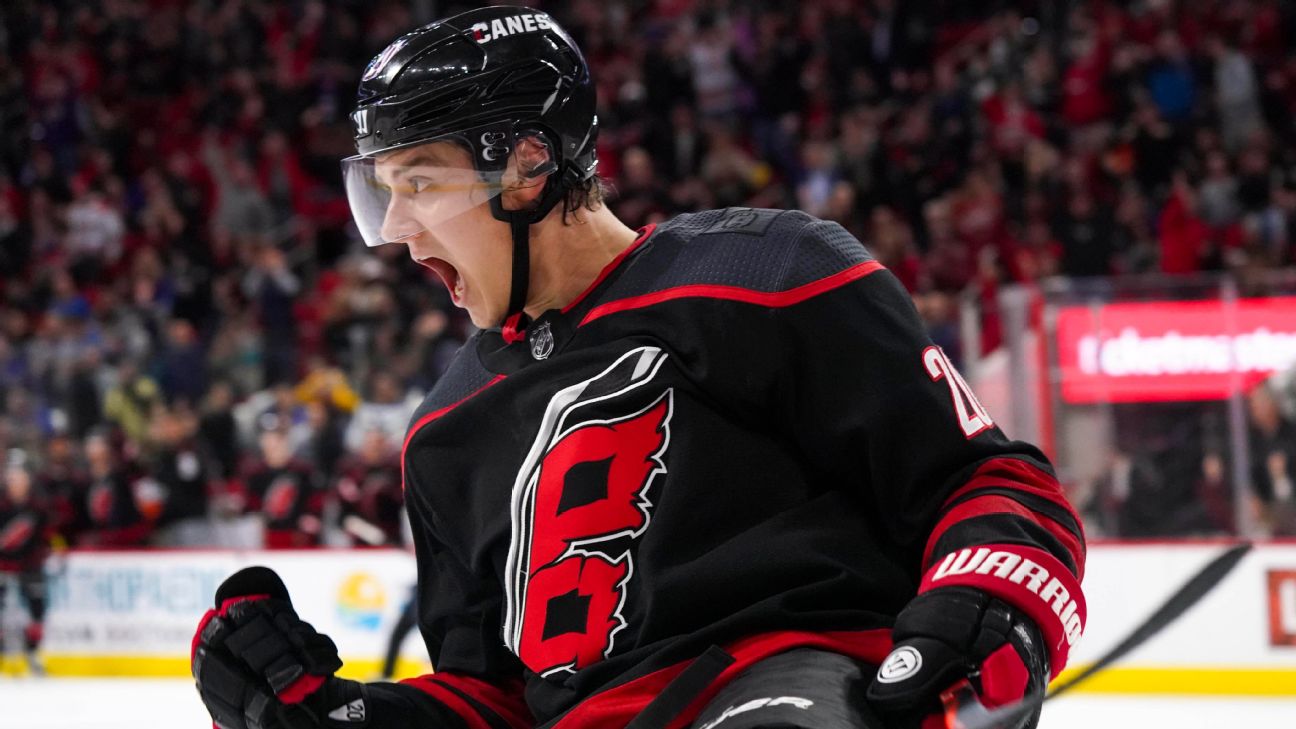 ESPN
By Emily Kaplan
The Carolina Hurricanes took the NHL by storm in 2018-19, both for their on-ice success and their wild, post-win celebrations that caused Don Cherry to dub them the "bunch of jerks." There are some different pieces in place this season, especially after the preseason trade shipping Justin Faulk off to St. Louis. Here's everything you need to know about the Hurricanes heading into the 2019-20 NHL season:

The big question: Was last season a fluke?

The Hurricanes shocked the league in the season's second half, and then in the playoffs as they not only snapped a nine-year playoff drought, but made it all the way to the Eastern Conference finals, including knocking out the defending Stanley Cup champion Capitals in the first round and sweeping the Islanders in the second.

"This year is really important," coach Rod Brind'Amour told ESPN in training camp. "We had a good year, but we have to back it up. You gotta keep it going. We're starting to get players who want to play here. The word's out. We have something special down here. If we build on that momentum, we're going to be OK. But if we go backwards, it's going to take longer to dig out."

All of the offseason drama surrounded Sebastian Aho's contract situation, and the fact that the Montreal Canadiens actually put forth an offer sheet for the dynamic young center. The Canes matched it, so he's here to stay through at least 2024. Canes captain Justin Williams announced he was taking a step away -- not necessarily retiring -- which opens the possibility for a late-season return. To bolster the forward group, Carolina signed Ryan Dzingel and Erik Haula. It also added Jake Gardiner -- at $4.05 million per year, a bargain for his talent -- which bolstered one of the NHL's best blue lines.

Of course, the Canes turned around and traded Justin Faulk a week before opening night, so that defensive zone is a little less jammed. And, in a change of recent events, they are actually spending to the cap.

This "bunch of jerks" wins the Metropolitan Division. Perhaps none of the four divisions had quite as much personnel shakeup as the Metro, with plenty of big free-agent departures, splashy trades and signings. And yet, it's still a wide-open race -- so why not the Canes, who have plenty of momentum from last season?

The Canes have big hopes for the 19-year-old Russian, who got his feet wet with a 20-goal rookie season and had decent postseason totals: 3 goals, 5 points in nine games, despite missing time after being knocked out by an Alex Ovechkin punch. Svechnikov should have prime opportunity to shine in 2019-20, especially as he gets time on Carolina's top line centered by Aho.

The blue line. Oh, what many teams would do to have the Hurricanes' blue line -- an embarrassment of riches when it comes to young, ascending players. It only got better after Gardiner signed. The Canes have to do some finagling to get everyone in. Haydn Fleury, for example, is ripe for a full-time opportunity.

Goaltending. The Canes got the most out of what they had in goaltending last season, especially after moving on from Scott Darling, whom they had signed to a big contract. This season, they'll turn to Petr Mrazek, who has shown flashes that he can be the guy. A lot hinges on Mrazek's success. His backup, James Reimer, doesn't exactly incite confidence based off past production.

This Hurricanes' offense is deep and flexible. Don't pay too much for the secondary fantasy pieces, as there are dozens of different line combinations that make reasonable sense on paper. Get Sebastian Aho early and add Teuvo Teravainen in the middle rounds, but try to make any other offensive piece a late pick.

That said, Nino Niederreiter is my favorite among the offensive pieces. He rediscovered his scoring touch after coming over in trade last season and will almost surely begin the campaign lined up with Aho at the top of the depth chart. His numbers last season with Carolina prorate to a 30-goal campaign.

Petr Mrazek was great last season, but so was Curtis McElhinney. What that suggests to me is the defense in Carolina supports strong goaltending regardless of who is wearing the mask. James Reimer is capable enough that this could turn into a split for duties. -- Sean Allen
Report a correction or typo
Related topics:
sportsespnnhlcarolina hurricanesnhl previewsebastian aho
Copyright © 2020 ESPN Internet Ventures. All rights reserved.
More Videos
From CNN Newsource affiliates
TOP STORIES