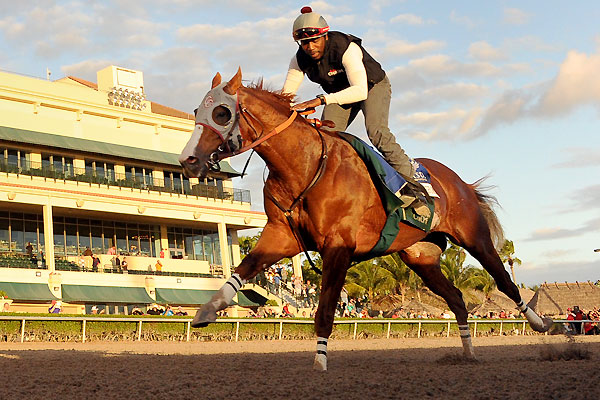 HALLANDALE BEACH, Fla. -- California Chrome is a favorite to win his finale and potentially make history.

The two-time Horse of the Year has been set as the 6-5 top choice to win Saturday's inaugural running of the $12 million Pegasus World Cup at Gulfstream Park. If California Chrome prevails over the mile-and-an-eighth distance in the world's richest race, his last before being retired to stud, he would become the first horse to pass $20 million in career earnings.

Arrogate, who beat California Chrome in their lone head-to-head meeting in the Breeders' Cup Classic last fall, is the 7-5 second choice.

As if there wasn't enough intrigue for such a big-money race, neither got an ideal spot in Monday's draw at Gulfstream. Arrogate drew the inside No. 1 post; California Chrome got the outside post in the 12-horse field.

"We won't have to be in the starting gate long," California Chrome trainer Art Sherman said. "Chrome's Chrome. He's got tactical speed. I was hoping we might get closer inside, but he's going to overcome all this, believe me."

Keen Ice -- whose initial odds were set at 12-1 -- is the third choice. Keen Ice was third behind Arrogate and California Chrome in the Breeders' Cup Classic but was beaten by more than 10 lengths.

The 12 stakeholders all put up $1 million for a spot in the starting gate for this first-time event. Had it not come together, it would have been unlikely that Arrogate and California Chrome would face off for a second time.

"I think it could be another great race," Arrogate jockey Mike Smith said.

California Chrome had his final official work over the weekend, though he was back out for a pre-dawn jog on Monday and even got to meet some members of the U.S. Polo Team.

It is largely expected to shape up as a two-horse race on Saturday.

Perhaps the best illustration of what lured some into this race is 9-year-old Prayer for Relief -- who has lost his last 20 starts yet is in the field with an eye on racing's biggest payday.

California Chrome's earnings to date are $14,502,650. The rest of the field has earnings of $12,856,216. And owners of the other 10 horses in the field know that they'll likely need a lot of help to beat either California Chrome or Arrogate to the finish.

"It is a horse race. Anything can happen," Neolithic owner Jack Wolf said. "But I think it's great to have these two horses."