Jones, a three-year starter for the Blue Devils who arrived at the school as a walk-on, is Mel Kiper's No. 3 quarterback and theNo. 25 prospect overall on his latest 2019 Big Board. And those listings were made before top-ranked QB Justin Herbert said he was staying at Oregon.

He learned under David Cutcliffe, who coached Peyton and Eli Manning in college.

"Growing up in Charlotte, I watched Coach Cutcliffe transform the Duke football program into a true force within the ACC with annual bowl eligibility and championship expectations. It became my dream to play for him and the Duke program, and these last four years have surpassed my every expectation," Jones said in a statement.

"I was fortunate to have the opportunity to graduate from one of the most respected academic institutions in the world while growing and maturing through a football experience that taught me far more than the game itself."

Cutcliffe called Jones "a cornerstone of our program."

"Without a doubt, we are excited for Daniel and his decision to enter the upcoming NFL Draft and could not be happier for him and his family," Cutcliffe said.

Duke linebacker Joe Giles-Harris also announced Monday he would forgo his final season of eligibility for the NFL draft.

Oregon's Herbert spoke to reporters Monday and said it wasn't a difficult decision to return to school.

"I wanted to kind of demonstrate just how committed I was to this team and I think it was helpful to do it before the game and not leave it until after so people wouldn't be affected," he said. "I am really excited to be back." 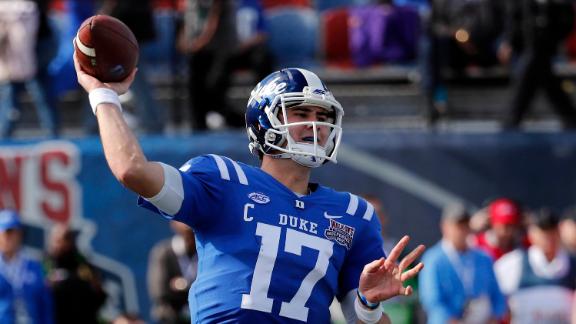