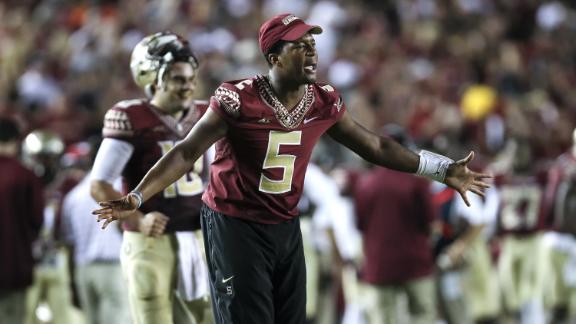 TALLAHASSEE, Fla. -- Jameis Winston will be back asFlorida State'sNo. 1 quarterback Monday after being suspended for the Seminoles'23-17 win over No. 22Clemson, coach Jimbo Fisher said Saturday night.

"He'll be back at practice Monday and be our quarterback on Monday," Fisher said in his postgame opening comments, which lasted five minutes.

After initially being suspended for the game's first half for making profane and sexually explicit comments, Winston was ruled out for the entire game by Florida State interim president Garnett S. Stokes and athletic director Stan Wilcox.

Fisher declined to elaborate on why the university changed its mind or when. Sources confirmed to ESPN that the school extended the suspension after determining that Winston had mislead the administration about his actions regarding Tuesday's incident.

Fisher said he believes this will be a learning experience for Winston, who has been involved in several off-field incidents and has been criticized for his questionable behavior despite previous transgressions.

The reigning Heisman Trophy winner was investigated last year for sexual assault. But Willie Meggs, the state attorney for the Second Judicial Circuit, chose not to charge Winston in December. Florida State is still following the case through with its Title IX investigation into the matter.

Winston also was suspended earlier this year from Florida State's baseball team for three games and ordered to perform 20 hours of community service after being cited for stealing $32 worth of crab legs from a local grocery store in April. There have been other minor run-ins with authorities, but no arrests.

"When your players misstep, you balance education -- which we do a lot, more than anybody in America -- with punitive measures, and they understand there's consequences. I don't condone any of the comments Jameis made earlier this week and how or where he chose to make them," Fisher said. "... At the end, we felt the one game made the most sense, and I chose to keep that process internal. ... Our hope and belief is Jameis will learn from this and use better judgment and language and decision-making and have respect for everything and continue to grow."

During pregame warm-ups, Winston took the field in full uniform, helmet and pads included. Fisher sent Winston back to the locker room, and Winston soon returned in just his jersey, jeans and a hat. Fisher said he did not know why Winston was on the field in pads but said "he wanted to be with his teammates."

Fisher said he could tell his team was distracted but applauded its mental resolve over the last week.

Junior cornerback Ronald Darby was sitting with Winston during the team movie Friday night when the redshirt sophomore quarterback leaned over and told him he was now suspended the length of the game.

"It was pretty crazy because he was only supposed to be out a half and the day before he's out the whole game," Darby said. "It was kind of crazy.

"... He was upset and apologized to the team. He said he just has got to do better overall. We were supportive. That's our brother. Any one of us who did it it wouldn't have been that huge. But it's him who did it, and they blew it up, and [the administration] had to do something about it."

Winston was on the sideline for the game and congratulated senior Rashad Greene after his 74-yard touchdown to tie the game 17-17.

Greene is another leader on the Seminoles along with Winston, but he said the team doesn't need to talk to Winston about his actions and how they could cost the Seminoles a chance at repeating as national champions.

"Jameis, he's not a kid. He just has a great personality and he likes to joke around. That's who he is and I don't plan on changing him," Greene said. "You just have to be careful how you do things in public, point blank, period."