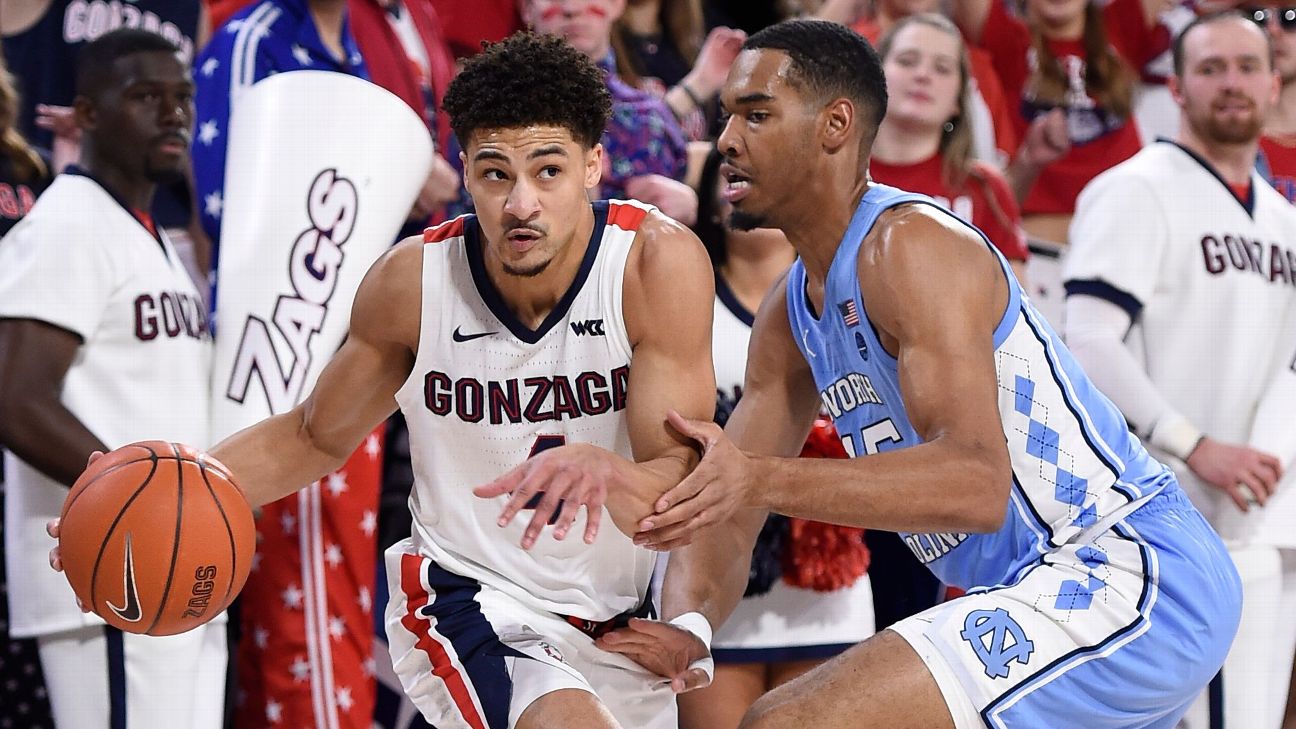 The Big Ten's home-team winning streak was snapped, as Michigan State won at Northwestern; before Wednesday, home teams were 13-0 in league play. Louisville outscored Miami (Ohio) by 20 over the final nine minutes to pull away from the RedHawks. Cincinnati bounced back from its home loss to Colgate with a key home victory over Tennessee -- while the Volunteers have now lost two in a row and three of five. Virginia beat Stony Brook 56-44, meaning the Cavaliers still haven't broken 65 points, but only two of their opponents have hit 50.

Saint Mary's pummeled Arizona State by 40 (!) points, with Jordan Ford scoring 34 for the Gaels. But the wild statline in that game came from Sun Devils guard Alonzo Verge Jr., who came off the bench to score 43 of Arizona State's 56 points.

And now, for the big takeaways from Wednesday.

Cole Anthony is going to miss the next four to six weeks with a knee injury, and early returns on what an Anthony-less Tar Heels team looks like haven't been great. North Carolina scored 81 points in the 94-81 loss against Gonzaga, which is the most the Tar Heels have scored all season, but some of it came in garbage time, as the deficit grew to as much as 23 points in the second half. Jeremiah Francis looks as though he's going to shoulder more of a playmaking role with Anthony sidelined, but coach Roy Williams is going to need more from Leaky Black and Brandon Robinson on the wing.

Black, however, was just returning from injury, and Robinson didn't play in the second half after feeling sick at halftime. Armando Bacot, the five-star freshman, had just two points in 14 minutes due to foul trouble. It's worth remembering that this was the issue even with Anthony, though. The freshman star wasn't getting enough help -- and now that he's out, the lack of complementary production is even more apparent.

There just aren't a ton of go-to scorers on the roster with Anthony out, and injuries and availability haven't helped. Black and Robinson have missed games, Francis and Anthony Harris have played only three games apiece and now Anthony is out at least a month. Carolina should be able to end its losing streak Saturday against UCLA, but the Tar Heels lost to Wofford on Sunday -- so the upcoming schedule isn't going to be the cakewalk it might seem on paper.

Gonzaga was expected to beat North Carolina, and Mark Few's Bulldogs handled the Tar Heels with relative ease outside of a few minutes late in the first half. The Zags continue to have new guys step up every game, and Wednesday it was Corey Kispert, who hit five 3s and finished with 26 points. With this matchup out of the way, they're going to be heavily favored in every game until at least February.

The Southern Conference was one of the best mid-major leagues in the country last season, with four teams at the top of the standings finishing with 24-plus wins. But the conference landed only one NCAA tournament bid after UNC Greensboro was the first team left out. Well, it's at it again. East Tennessee State picked up a massive résumé win at LSU on Wednesday, running the Tigers off their home court 74-63. The Buccaneers had 19 offensive rebounds and 40 points in the paint, and simply dominated Will Wade's group. The 11-point margin wasn't indicative of much ETSU outplayed LSU.

UNC Greensboro, meanwhile, went to Vermont on Wednesday and beat the Catamounts, holding on for a one-point win. That victory came just three days after the Spartans lost on a buzzer-beater to NC State. It also came three days after Wofford beat North Carolina in Chapel Hill.

East Tennessee State is going to be one of the best mid-major teams in the country and a potential double-digit seed to watch out for in March, but the Bucs might not be the only SoCon team to hear its name on Selection Sunday.

Nearly everyone had circled Kentucky's two-game stretch against Ohio State and Louisville beginning this Saturday as the big opportunity to see how much the Wildcats had progressed since the start of the season. They beat Michigan State in the season opener, lost to Evansville a week later and haven't played anyone of note in the past five weeks.

Well, Utah had other plans.

The Utes jumped out to an early lead against the Wildcats, extended the margin to 17 points in the second half, let Kentucky come all the way to tie it up -- and then got the game-winning bucket from Timmy Allen with 1:21 remaining and held on to win, 69-66. Larry Krystkowiak's young team had been inconsistent for the first month, beating Minnesota and Nevada and losing to Coastal Carolina and Tulane, but the Utes are now on a five-game winning streak after Wednesday's victory.

As for Kentucky, the Wildcats are facing the same issues they've faced all season. Kentucky went just 2-for-17 from 3-point range against Utah, missing several wide-open outside shots in the final minutes. Kentucky entered Wednesday shooting under 30% from 3-point range and went 4-for-17 from behind the arc in the previous loss to Evansville. Calipari likes playing with his three guards -- Tyrese Maxey, Ashton Hagans, Immanuel Quickley -- but none of the three is making shots right now.

Seton Hall is in the midst of a two-game losing streak after falling by 20 at Rutgers last weekend, and the Pirates now head home to host No. 7 Maryland. Unfortunately for Kevin Willard's team, it's going to be without starting big man Sandro Mamukelashvili and is also likely to be without All-American guard Myles Powell. Powell suffered a concussion in that loss to Rutgers and didn't play in the second half; the Pirates announced Tuesday he was in concussion protocol and out indefinitely.

If Powell is out, Willard will have to turn to Shavar Reynolds or Anthony Nelson for extended roles in the backcourt -- but neither has close to the scoring ability of Powell. There were already concerns that Seton Hall was too reliant on Powell on the offensive end, and now the Pirates might have to go against a top-10 team without him, as well as without their best scoring big man in Mamukelashvili. Maryland will look to bounce back from its first loss of the season last week to Penn State.

Auburn is one of just four unbeaten teams remaining in college basketball, but the Tigers don't have any marquee wins on which to hang their hat. Their home game against NC State on Thursday won't solve that issue, either, but it is Bruce Pearl's toughest game in the first 2 months. The Wolfpack are likely to be Auburn's highest-ranked BPI opponent all season until a Jan. 18 trip to Gainesville to face Florida. Meanwhile, NC State has flown beneath the radar since losing by one at home to Georgia Tech in the season opener.

The Wolfpack have won three in a row, blowing out Wisconsin in Raleigh and then winning at Wake Forest and UNC Greensboro. The guard matchup is going to be the thing to watch on Thursday; both perimeter groups are deep, talented and versatile. Markell Johnson going against J'Von McCormick at the point guard spot will be key.

Duke back in action

After Duke played 10 games in the first 31 days of the college basketball season, we haven't seen the Blue Devils hit the court since Dec. 6. They will host Wofford on Thursday ... and then take a nine-day break before playing Brown on Dec. 28. Wofford will come in on a high, riding a five-game winning streak after beating North Carolina in Chapel Hill on Sunday. The last time we saw Mike Krzyzewski's team, it was getting road victories at Michigan State and Virginia Tech and finding its groove again after the Stephen F. Austin defeat.

Freshman Cassius Stanley will have had more time to heal from his leg injury, but Krzyzewski was able to extend his bench and expand his rotation while Stanley was out. Jordan Goldwire played 55 minutes the past two games, scoring 10 points against Virginia Tech and totaling eight steals in his past three games, and Joey Baker totaled 27 points in victories over Winthrop and Michigan State. 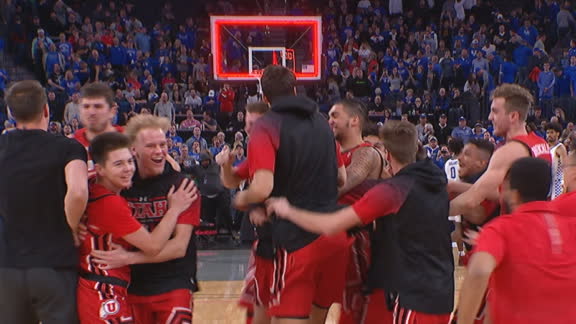 Utah completes upset on missed Kentucky 3 at buzzer
Unranked Utah takes down No. 6 Kentucky 69-66 as the Wildcats miss a 3-pointer at the buzzer. 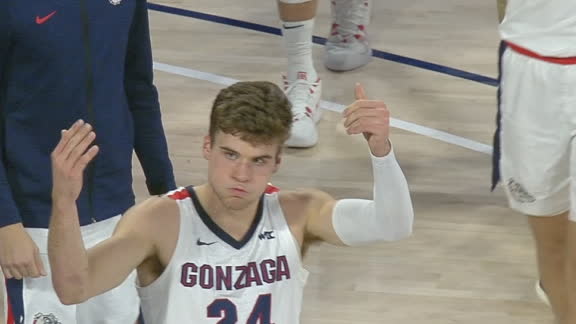