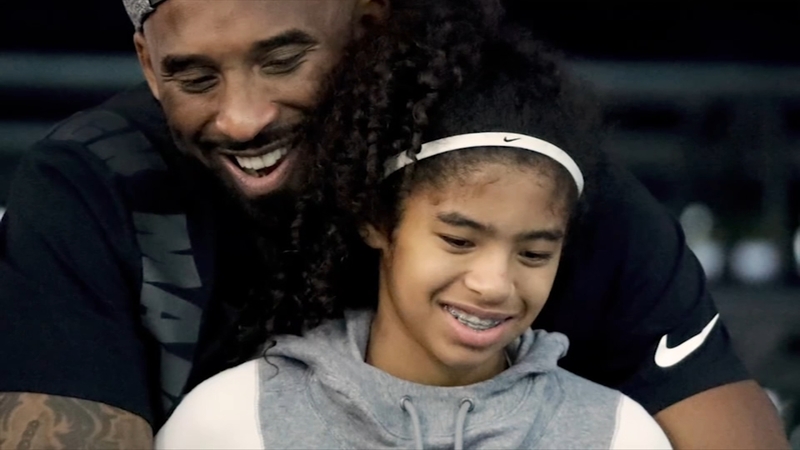 CHAPEL HILL, N.C. (WTVD) -- Basketball legend Kobe Bryant and his daughter were two of nine people killed in a helicopter crash in Southern California on Sunday morning and their deaths sent shockwaves across the world and here in basketball-rich North Carolina

ABC11 spoke with basketball players and coaches at Panther Creek High School on Monday. Each had their own personal memory of Bryant. But it's what he did to the game that will change the way they play forever.

"He came and gave us advice on the future," said Panther Creek coach Shawan Robinson. "And it's one of the things that really stuck with me. Give your all into everyday. And another thing that stuck to me was his goals were to have a family. Work really hard, find a girl that you can marry, and enjoy your family."

Robinson heard that advice when he played with LeBron James at ABCD Camp and Bryant came to speak to the camp participants.

Bryant seemed larger than the game itself. He was legendary for his relentess drive and competitive spirit.

"If you were to play against Kobe in anything, he'd want to beat you," Robinson said.

The imprint Bryant leaves on the game is not lost on the players either.

"When you're fearless, you make plays that you don't know you could really make," Panther Creek senior basketball player Armon Muldrew said. "If anybody has the mentality he has going into the game, they could do anything they feel like they want to do."

On Monday afternoon, Panther Creek held its first practice since the stunning news. Players and coaches tried to approach it with that "Mamba mentality."

"Go out and compete every day. Compete every night. Everybody. Every team, play until they can't play no more," Robinson said.

For Muldrew, it was a reminder about life itself.

"It's important how you inspire the next person, and how you love the people around you and don't take today for granted," he said.

The mood was somber in many sports bars in Chapel Hill on Sunday night. Some patrons were crying, others quiet.

"I want to tear up because honestly man that man is one of the greatest basketball players I ever watched. Ever. LeBron may have stats but Kobe brought a different level to the game..." said Davis Tanui. "When I'm shooting a ball into the trash can, I say 'Kobe,' because he's the best. It hurts to lose someone so important to the game."

At 18 years old in 1996, Bryant was the youngest player in NBA history. Bryant was already famous enough that in a news conference he declared, "I have decided to skip college and take my God-given talents to the NBA."

If the Philadelphia native had gone to college, he surely would have been playing in the Triangle. Through the years, Kobe has given two answers for which university he would have played for: Duke or North Carolina.

In 2013, he first admitted that he would've been a Tar Heel, telling Jimmy Kimmel "the truth has to come out."

But then in 2017, Kobe seemed to change his mind, saying on Twitter that he would've gone to Duke. He explained that UNC Coach Dean Smith wished him the best of luck when it was clear he was going pro, but Duke Coach Mike Krzyzewski kept recruiting him.

Bryant went on to lead the Los Angeles Lakers to five NBA championships and won two gold medals under Duke Basketball Head Coach Mike Krzyzewski with Team USA in 2008 and 2012.

Kryzewski issued the following statement on the passing of Kobe and Gianna Bryant:
"We have tragically lost one of the greatest sports figures of our time with the passing of Kobe Bryant. He was an incredibly gifted person who was universally respected. He was in constant pursuit of doing something special and there will never be a greater warrior in our sport. I had the amazing honor of coaching Kobe in the 2008 and 2012 Olympic Games, and I will always remember how much he cherished representing his country in a first-class manner playing the game he so loved. The game of basketball is better today because of Kobe, and he deserves eternal appreciation for that. This is a devastating loss, made even more tragic by the passing of his daughter, Gianna, and all others on board. The entire Krzyzewski family is saddened as we genuinely loved and admired Kobe. We extend our deepest sympathies to his wife, Vanessa, their daughters Natalia, Bianka, and Capri, and the families of those involved."

North Carolina native and basketball legend Michael Jordan issued the following statement:
"I am in shock over the tragic news of Kobe's and Gianna's passing. Words cannot describe the pain I'm feeling. I loved Kobe - he was like a little brother to me. We used to talk often, and I will miss those conversations very much. He was a fierce competitor, one of the greats of the game and a creative force. Kobe was also an amazing dad who loved his family deeply - and took great pride in his daughter's love for the game of basketball. Yvette joins me in sending the deepest condolences to Vanessa, the Lakers organization and basketball fans around the world."

NCCU head coach LeVelle Moton issued the following statement on the passing of Kobe and Gianna Bryant:
"Devastated... Just Devastated. He inspired everyone to be greater than their current self. The world was better because he was here. RIP to his daughter GiGi Heartbroken."

.@NCCU head 🏀 coach @LeVelleMoton releasing this statement on #KobeBryant: “Devastated..Just Devastated. He inspired everyone to be greater than their current self. The world was better because he was here. RIP to his daughter GiGi Heartbroken.” @ABC11_WTVD @HBCUGameday pic.twitter.com/S0z8fEir8K

SEE ALSO: More reactions to the death of Kobe Bryant

ABC11's DeJuan Hoggard also had a personal tie to the NBA legend - as an intern at KABC in Los Angeles, he interviewed Bryant.

"I had the privilege of interviewing Kobe Bryant in 2008 following a Lakers game as an intern in college with ABC7. It was my first NBA game ever. I remember Curt Sandoval being with me in the locker room. In that moment, I felt like I 'made it.'"

Kobe’s untimely death felt personal. Today, I cried. As a basketball fan, a husband, a father to 2 beautiful girls, a young kid who wanted to be like Kobe (and Jordan) on the court, and a journalist...this hurts! I feel for all those who loved him dearly. RIP Kobe! 🏀

ABC11's Dejuan Hoggard also had a personal tie to the NBA legend, as an intern at KABC in Los Angeles he was among other renowned reporters when he interviewed Bryant.