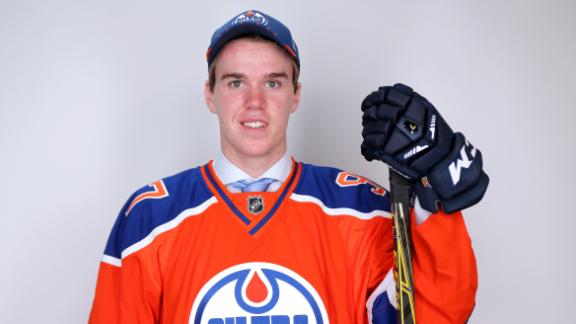 FORT LAUDERDALE, Fla. -- And then there were none.

Here's a look at the teams that have to be feeling good about themselves heading into free agency and some that still have work to do to get where they need to be.

Feeling good about themselves

OK, so it was a no-brainer to pick Jack Eichel second overall. But credit general manager Tim Murray for expediting the transition from "tank" to "try" in Buffalo. We won't know for some time whether Robin Lehner is going to be the man in goal for the reconstituted Sabres, but he certainly looks like he has the tools to grow into that role, and Murray knew Lehner from their time in the Ottawa Senators organization. What's impressive is the addition of two-way center Ryan O'Reilly from the Colorado Avalanche. That acquisition cost three young prospects in Nikita Zadorov, Mikhail Grigorenko(the 12th overall pick in 2012) and J.T. Compher (the Sabres also received Jamie McGinn in the deal). But in talking to Sabres head coach Dan Bylsma, it's clear O'Reilly, who is just 24, will be counted on as a kind of buffer for the Sabres' young centers, including Eichel. O'Reilly has one more year on his contract, but it wouldn't be a surprise to see the Sabres count on him for the long haul.


General Manager of the Year finalist Bob Murray wasn't resting on his laurels on the second day of the draft, as he acquired goaltender Anton Khudobin from the Hurricanes for defenseman James Wisniewski (thus freeing up crucial cap space with Wisniewski's salary off the books) and nabbed restricted free agent Carl Hagelin and the 59th and 179th picks for Emerson Etem and the 41st pick. The moves reinforce the notion that the Ducks believe they are close to championship form. Although Etem had local appeal as a California native, as well as good size and great speed, head coach Bruce Boudreau lacked full confidence in his abilities, as witnessed by the fact that Etem was in and out of the lineup in the Ducks' run to Game 7 of the Western Conference finals. As for Khudobin, he has shown enough stretches of stellar play the past couple of years, playing behind a poor Hurricanes team to suggest he's got the tools to become a solid starter. It's believed the move will pave the way for top goaltending prospect John Gibson to play another season in the American Hockey League while providing support and perhaps competition for starter Frederik Andersen, who seemed to hit a wall late in the Ducks' playoff run.

Connor McDavid becomes the fourth first overall pick made by the Oilers since 2010. Maybe fourth time is a charm. But while the offense should be a given, new GM Peter Chiarelli understands the need to bolster his team's leaky goaltending and defense before the Oilers can start thinking about returning to the playoffs for the first time since 2006. To that end, we love his addition of Cam Talbot. Yes, he only has one year left on his contract, but the 27-year-old showed his unflappable nature this season, when he backstopped the New York Rangers to a Presidents' Trophy while franchise goaltender Henrik Lundqvist was sidelined for a few weeks with a vascular condition in his neck. The Oilers don't resemble the Rangers defensively, but Talbot looks to have the tools to help stabilize what has been an unstable position for an Oilers team that could surprise next season.

GM Bryan Murray did a masterful job resolving his three-headed goalie problem by acquiring the 21st overall pick in the draft from his nephew, Sabres GM Tim Murray. The Sens picked up center Colin White with the pick and also shed David Legwand's unwieldy $3.5 million contract ($3 million cap hit). The only downside is if Lehner turns out to be another Ben Bishop (who once played for the Senators) and Andrew Hammond, who essentially took Lehner's job in Ottawa as goaltender of the future, turns out to be a flash in the pan.

The Flames, already boasting top young talent in Sean Monahan, rookie of the year finalist Johnny Gaudreau and defenseman T.J. Brodie, added another key piece to what is an impressive renaissance in Alberta by acquiring restricted free agent defenseman Dougie Hamilton from the salary-cap-strapped Bruins. The Flames gave up the 15th, 45th and 52nd picks to acquire Hamilton, who was the 2011 ninth overall pick of the Bruins, but whom the Bruins felt they couldn't bring under contract. This might be the single-biggest acquisition of draft weekend, besides McDavid and Eichel.

Still have work to do

Yes, the Bruins became the first team in NHL history with three consecutive first-round draft picks. But any time you have a ready-made defenseman, such as Hamilton, on whom you previously spent a No. 9 overall pick and you cannot bring him under contract, that is a failure. We don't mind the Milan Lucic deal to the Los Angeles Kings for goaltender Martin Jones, the 13th pick in the draft and prospect Colin Miller, though we do think Lucic, heading into a contract year, could thrive under Darryl Sutter, while representing another lineup void rookie GM Don Sweeney is going to have to address. The bottom line is the Bruins added only a backup goaltender while losing three everyday players over the weekend in Carl Soderberg, Lucic and Hamilton. That math doesn't add up.

So much for all the talk of remaking the Maple Leafs. Maybe the marketplace for Phil Kessel heats up in the coming days as teams looking for an impact winger strike out on the free-agent market or realize there simply aren't alternatives as attractive as the Toronto sniper. But wasn't the idea that the draft period would provide the best marketplace for players such as Kessel,Joffrey Lupul or Dion Phaneuf (though it now seems the Leafs might keep their captain)? Bottom line is if changing the culture of this team was a priority, as we were led to believe, the draft represented more time passing and more chance the status quo remains -- and the status quo should be unacceptable to this management team.

GM and Hall of Famer Ron Francis must have been a bit surprised to find top-rated defenseman Noah Hanifin still available when the Hurricanes were set to make the fifth overall pick. Along with U.S. Olympian James Wisniewski, who was acquired Saturday for netminder Anton Khudobin, the blue line certainly has some upside. But even with the addition of Eddie Lack from the Vancouver Canucks to replace Khudobin, the same issues that confronted Francis before the draft still remain: What to do about veteran goaltender Cam Ward and captain Eric Staal, both of whom are entering the final season of their contracts? Is there any way to get out from under the albatross of a contract that belongs to Alexander Semin? That Khudobin might well have been the team's best goaltender further muddies the waters for the Hurricanes as they try to halt a streak that has seen them miss the playoffs every year since 2009.

Yes, they're the Stanley Cup champions, so GM Stan Bowman gets lots and lots of leash as we assess what lies ahead in the offseason. But the Blackhawks still have work to do when it comes to the salary cap, and even though the expectation was the Blackhawks would try to make a move in advance of the draft, in order to maximize their ability to stockpile assets while moving salary, that's still a possibility as we head into the free-agency period. Bowman will still be looking to move Patrick Sharp, Bryan Bickell and/or Kris Versteeg at some point this offseason. It'll happen. But if Bowman had his way, he'd have gotten some of this work done at the draft.