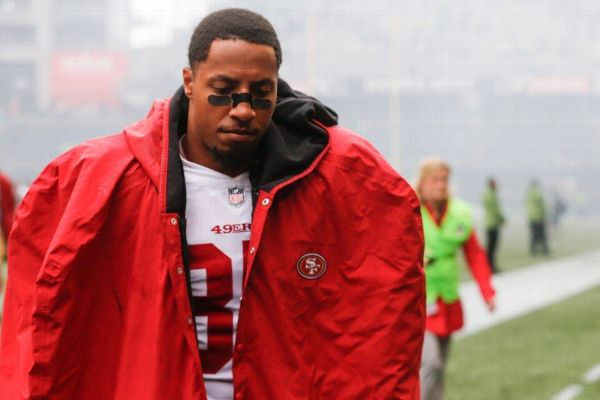 "I think we all know why he hasn't received a call,'' Smith told reporters on Tuesday as the Panthers (2-1) broke for their bye week.

Last season, the NFLPA filed a grievance with the NFL on Reid's behalf, alleging that team owners and the league, influenced by President Donald Trump, colluded to prevent his employment because of his protests.

He became a free agent this past offseason and remains unsigned although several teams, including the Panthers and Atlanta Falcons, have lost a starting safety to injury.

Smith, acquired by Carolina in a trade with Philadelphia during the offseason, has defended the right of Kaepernick, Reid and others to protest.

He said he would be more than willing to sit down with the Carolina coaches and make a case for signing Reid, 26, to replace veteran Da'Norris Searcy, who was placed on injured reserve last week after suffering his second concussion in a month.

"Honestly, with our injuries, I hope he ends up here,'' Smith said. "I know how he is as a talent. If this is something where they come and talk to me about him, I'll be glad to talk about him as a player, as a person. He's one of the best men I've been around, so I hope that is something that can happen for us because I know that with the injuries we have, he's a guy that can help this team.

"I really hope he gets a shot. He deserves it, and it's not right what's happened to him.''

The Panthers played with a three-safety rotation on Sunday against Cincinnati, starting Mike Adams at strong safety and Colin Jones at free, with rookie Rashaan Gaulden giving relief.

Rivera, asked directly about Reid, replied only that the team has discussed several names for the fourth safety spot. He said Southward "definitely'' has a chance to move to the 53-man roster by the time the Panthers next play against the New York Giantson Oct. 7.

So it doesn't sound like Smith, who has been helping promote social justice causes for the Players Coalition, will get a chance to plead his case on Reid.

"Both of those guys should be playing,'' Smith said of Reid and Kaepernick. "They should be in the league, both of them.''
Report a correction or typo
Related topics:
sportsespnnational anthemtorrey smithcarolina panthersnfleric reidcolin kaepernick
Copyright © 2020 ESPN Internet Ventures. All rights reserved.
More Videos
From CNN Newsource affiliates
TOP STORIES