WTVD
CHAPEL HILL, N.C. (WTVD) -- UNC Chapel Hill released the details of a "notice of allegations" from the NCAA Thursday in which the collegiate sports governing body found a lack of institutional control that constitutes a "severe breach of conduct" at the North Carolina school.

The notice was posted on a school website Thursday dedicated to the investigation: http://carolinacommitment.unc.edu/updates/unc-chapel-hill-releases-ncaa-notice-of-allegations/

The 59-page notice from the NCAA enforcement staff details five alleged violations including impermissible benefits to student-athletes and interference by school officials in the investigation.

"Impermissible extra benefits provided over a nine-year timespan seriously undermined or threatened the integrity of the NCAA Collegiate Model," reads the notice.

The notice details allegations made by former federal prosecutor Kenneth Wainstein - who UNC commissioned to re-investigate allegations of academic irregularities.

The more than 130-page report produced by Wainstein and his team uncovered 18 years of academic fraud at the school. It showed 3,100 students were enrolled in so-called paper classes, many of them were athletes. Those classes required little to no work. Over the span of almost two decades, the report showed student athletes were steered toward those classes to boost their grades and eligibility. The problems centered on the academic department formerly named African and Afro-American Studies.

The NCAA notice also alleges "Jan Boxill, then philosophy instructor, director of the Parr Center for Ethics, women's basketball athletic academic counselor in the Academic Support Program for Student-Athletes (ASPSA) and chair of the faculty, knowingly provided extra benefits in the form of impermissible academic assistance and special arrangements to women's basketball student-athletes."

The NCAA notice alleges that Deborah Crowder - who managed the office of African and Afro-American Studies - interfered with the investigation.

It also alleges Dr. Julius Nyang'oro - former professor and chair of the African and Afro-American Studies department interfered with the investigation when he "refused to participate in an interview with both the institution and the enforcement staff despite at least five requests for his participation."

In a statement released with the documents, Chancellor Carol L. Folt and Director of Athletics Bubba Cunningham said:

"We take the allegations the NCAA made about past conduct very seriously. This is the next step in a defined process, and we are a long way from reaching a conclusion. We will respond to the notice using facts and evidence to present a full picture of our case. Although we may identify some instances in the NCAA's notice where we agree and others where we do not, we are committed to continue pursuing a fair and just outcome for Carolina."

The university has 90 days to file a response if it intends to challenge any of the allegations.

Once the response is submitted, the enforcement staff at UNC has 60 more days to craft its response to the Committee on Infractions - the panel that will ultimately decide UNC's fate.

A Committee on Infractions hearing will then be set where UNC will present its case.

Then - after another six to eight week waiting period - the committee will deliver its infractions report.

UNC could then accept or appeal the report.

If all of that plays out, the hearing would likely be in the fall and a final decision could be rendered sometime early next year.

The 2010 NCAA investigation resulted in the school's football program being placed on three years' probation and the team was banned from postseason play in 2012.

Asked in UNC could self-impose any penalties, Cunningham said, "We are not that far in the proceedings."

Coaches Fedora, Hatchel and Williams have released statements saying in part that they're disappointed and looking forward to closure. 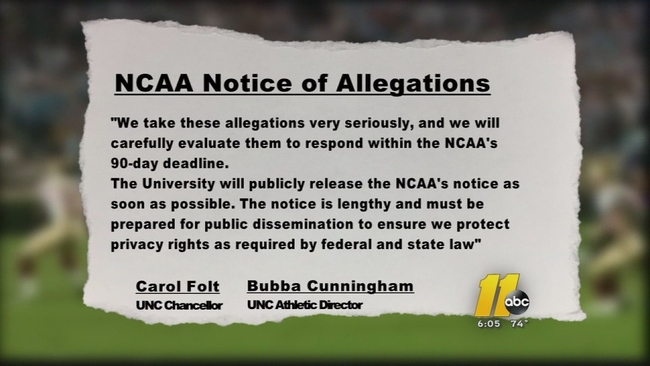