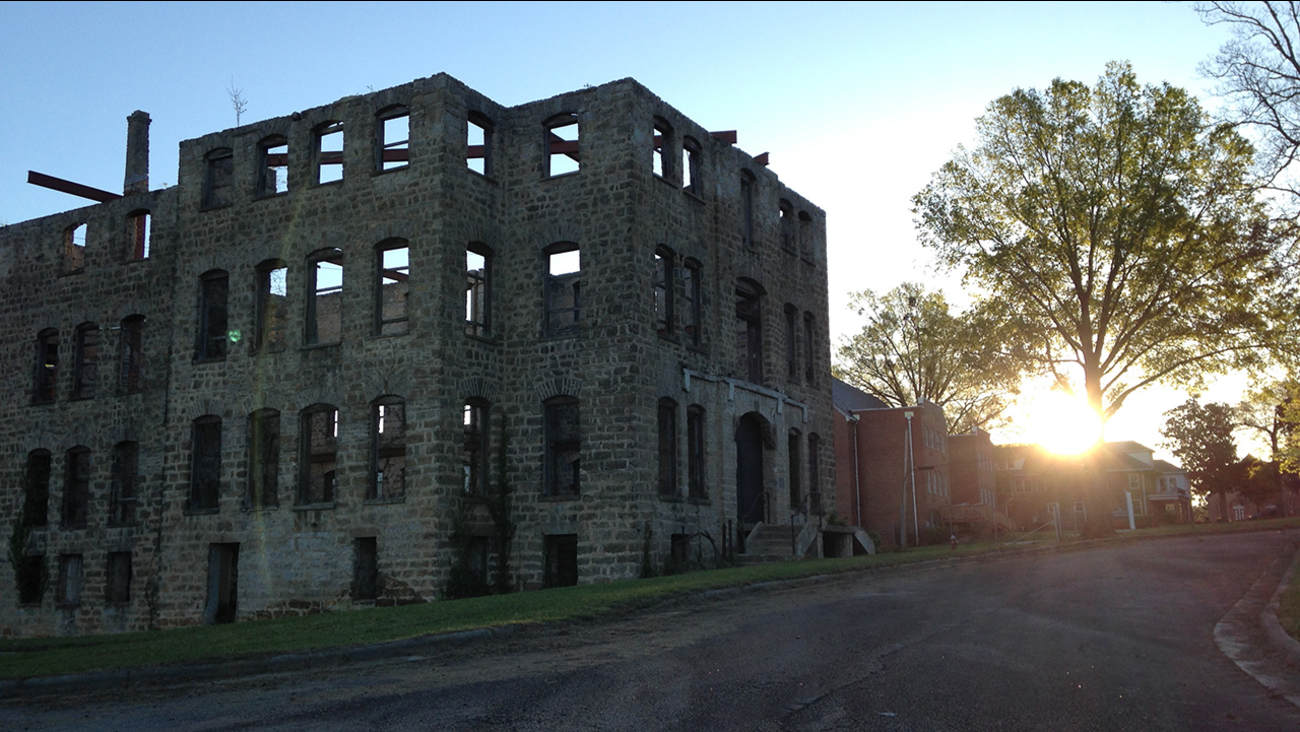 A shell of a building is all that remains of St. Agnes Hospital in Raleigh. (Michael Palko)

RALEIGH (WTVD) -- A monument to forgotten history, St. Agnes Hospital has been untouched for so long that trees have begun growing inside its stone walls.

It's hard to imagine this was once the most advanced hospital for African Americans for hundreds of miles.

The building's remains were gutted long ago, leaving an empty shell with no roof and no floors. The walls stretch four floors high, with ivy and weeds creeping down the sides, creating a tangled carpet across dirt floors. Empty, open windows allow visitors to peer straight through the wilderness growing within.

There are even mysterious sculpted faces carved into the stone by the entrance.

It's picturesque; an artist's dream.

In fact, thanks to Linda Dallas, an Assistant Professor at St. Augustine's University, artists from all over the Triangle have begun visiting to preserve St. Agnes' history.

While for many years the occasional artist, photographer, or historian would wander past with piqued interest, the building has been gated off and marked with a "No Trespassing" sign. Dallas, however, has scheduled a series of "Envision" events, opening St. Agnes' doors to the public.

"During these events," shares Dallas, "visitors bring life to the old hospital once again." Artists flood the building, capturing its antique beauty with sunset photo sessions, watercolor landscape portraits, and even music and dance performances.

"The city is growing and changing so fast I feel like some of these important stories and important places are getting lost," says Dallas. "You have to grow from knowing who you are. So we cannot lose the history of the city."

Many people have no idea the critical role this old and forgotten building played in the growth of Raleigh.

Built by Students and Freed Slaves

St. Agnes changed the medical landscape of Raleigh for generations. "In the 1920s it was the only well-equipped hospital that served the African American community between Washington and New Orleans," explains Dallas.

"St. Agnes saved a lot of lives," adds Esther Delany, whose great-grandfather Bishop Henry Beard Delany laid the first and final stone of the hospital building. That the sturdy building is still standing a century later is a testament to the passion and handiwork of the St. Augustine students and staff who built it.

There was a certain can-do attitude Bishop Delany brought to St. Agnes. After being released from slavery, he had 10 children. He made sure they all got their education -- two dentists, two lawyers, two surgeons. Two of his daughters, Sarah and Elizabeth Delany, known to Raleigh history as the Delany Sisters, became civil rights activists who wrote the book "Having Our Say," which became a New York Times Bestseller, broadway play, and landed them on Oprah.

Delany's roots are deeply entwined with St. Agnes. Apart from her great-grandfather laying the groundwork, her grandfather later became a surgeon at St. Agnes after attending Shaw University's medical school. Afterwards, her mother became a nurse at St. Agnes. Finally, Delany herself was born in those very halls.

And if you were sick or dying and needed a higher level of medical care?

"You'd probably die," says Delany. "Even if there was a white hospital, I don't think a black man would try to go there. They wouldn't take you, but you also just wouldn't go. It just wasn't done. It was unspoken."

"But St. Agnes was accessible to all black people around Raleigh and outlying little towns," Delany adds. "St. Agnes was ahead of its time."

The hospital did more than just save lives: It built opportunity. Delany's family tree is full of doctors, lawyers, nurses, and influential and successful Raleigh-ites. Without St. Agnes to provide doctor residency programs and medical training for nurses, graduates from the Shaw medical school would have had to leave Raleigh in order to become full-fledged doctors. St. Agnes ensured opportunities for Raleigh's black community when places like Rex Hospital wouldn't have allowed them at the time.

"My mother came from Tennessee to go to St. Agnes to become a nurse," recalls Delany. "Otherwise, I don't know where she would have gone."

Despite its advanced medical technology, St. Agnes closed its doors in 1961. "It closed around the time integration started, so I guess the funding was not there," theorizes Delany. "At that time, Wake Memorial opened. My mother went to work there."

"There was a hall for all black people at the time," she says. "We still had separate hallways."

Hollowed out and lurking behind a closed gate, St. Agnes is but a shadow of its former self. Even as photographers and historians crawl through the open windows to walk along the dirt-floored basement, it can be difficult to envision how this hospital once looked.

A stone-lined, rectangular pool of water lays among the remains of St. Agnes Hospital.

Clues, like a stone-lined, rectangular pool of water on the floor, or a well-defined gap between walls indicating a door, give an idea as to how this space was once used. However, the artists are the ones who truly give structure and form to St. Agnes, helping viewers imagine the history and stories that happened within the crumbling walls.

"We were fortunate enough to have the NC Museum of History invite us to continue the display at the history museum," shares Dallas. The exhibit features paintings of the doctors and nurses, snapshots of daily routine in the hospital -- births, deaths, surgeries, and life. One artist named Pinkie Strothers even created a three-dimensional model, complete with dolls creating scenes in each room. While we may not have much left from the history of St. Agnes, we do have storytellers and artists to help re-create history so it's not lost forever.

"My goal right now is to replace the Oakwood Avenue fence with a new fence and embellish it with artwork created by St. Augustine University Students," she explains.

Dallas has a theory about how the St. Agnes building draws the curiosity of artists and explorers. "The stone was literally dug up from St. Augustine's campus quarry, pulled from our land and built by our own students and staff. It embodies the 'can-do spirit' of the mothers and fathers of that school. The spirit of making a way out of no way."

Bishop Delany would be proud.

Join the Envision St. Agnes Facebook group for updates on future events and calls for artists!

Or email Linda Dallas at lcdallas@st-aug.edu.