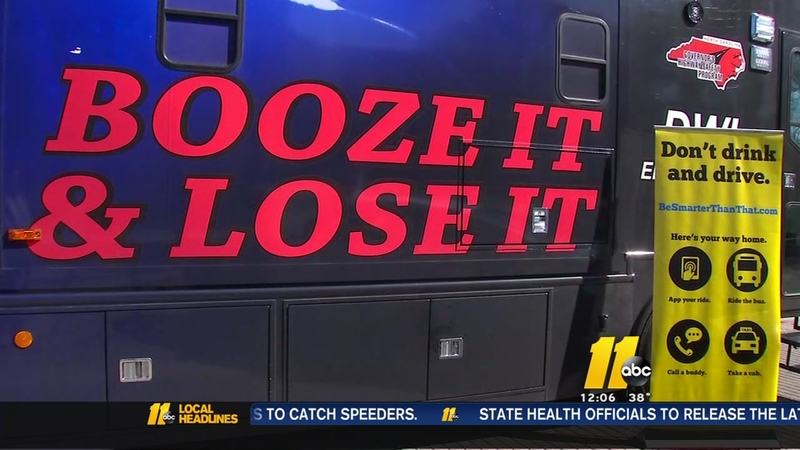 Police cracking down on drunk drivers over St. Patrick's weekend

RALEIGH, North Carolina (WTVD) -- Representatives from the North Carolina Governor's Highway Safety Program and law enforcement kicked off the St. Patrick's "Booze it and Lose it" campaign at Duke Energy Center for the Performing Arts Thursday.

The campaign, which runs through Sunday, targets drunk drivers through sobriety checkpoints all across the state.

"We think it's very effective in getting the word out," said Don Nail, Director of the Governor's Highway Safety Program, which helps fund the campaign. "We really want folks not to get behind the wheel impaired. We don't want them to have to be arrested, get themselves in a situation where law enforcement has to interact with them."

Mothers Against Drunk Driving advocate Kim Edens spoke at the event. She lost her 16-year-old daughter in a crash. Her daughter had been riding with a friend who had been drinking.

"The grief of losing a child is a lifetime and the heartache is endless," Edens said. "So please have a plan before you go out. Get a designated driver or better yet--you be the designated driver."

There was also a Blood Alcohol Testing truck, referred to as a "BAT mobile" at the event. They are placed near some checkpoints. If somebody fails a field sobriety test, that person is taken to the truck.

"They will put them on one of our six instruments that we have on the vehicle where they'll test them to find out how much alcohol is in their system," said BAT Program Supervisor Jason Smith.

The truck even has a magistrate who can charge offenders on the spot.

During the St Patrick's campaign last year, there were 631 checkpoints statewide with 790 DWI violations and 30,334 criminal and traffic violations, according to the North Carolina Department of Transportation.