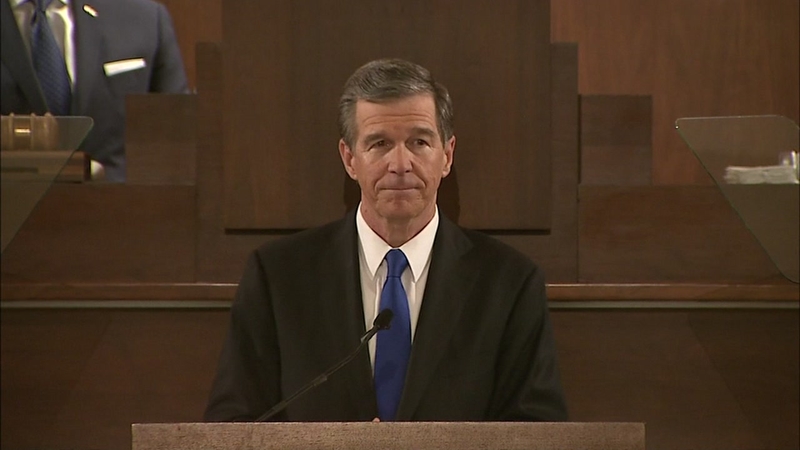 During his second biennial State of the State address, Cooper made a soft sell for his favored initiatives to a joint session of the General Assembly. The legislature is still in Republican hands, but Democrats won 16 additional seats in November, taking away veto-proof control the GOP held during the first two years of Cooper's term, which was marked by acrimony and litigation.

"The people of North Carolina are determined for us to work together. They have spoken. They want a more balanced approach to government," Cooper said to a statewide television audience.

Gov. Cooper: “Last year, I pushed for an effort to provide tuition-free community college for high-demand jobs... Other states are already doing this, so let’s get it done.” #stateofthestate #abc11 pic.twitter.com/EzUvGx15Kx

While Cooper and Democratic legislators have more negotiating power, the governor declined to use the figurative stick on the Republicans to get his points across from the House chamber of the Legislative Building. Democrats have for years sought to expand the Medicaid rolls to cover hundreds of thousands of low and middle-class healthy adults and their families, arguing it will bring tens of thousands of jobs, help rural hospitals and save lives.

"Are we willing to help them? It's time," Cooper said in a phrase he repeated several times during what was likely his strong pitch of the evening. But he later acknowledged the second thoughts of Republicans: "Guys, I know we can do this and I know some of you have some concerns. But let's listen to each other and let's get this done in a North Carolina way."

As expected, he also urged lawmakers to agree to put a public school construction bond on the statewide ballot during this legislative session, saying roughly 40 percent of the public schools are at least 50 years old. He and Republican House Speaker Tim Moore have created an unusual alliance in support of putting a K-12 debt referendum on the ballot. Senate Republicans have approved an alternate plan.

A bond package "gets hammers swinging all across our state, and still leaves money for good teachers and principals," Cooper said. Although he didn't provide details, leaving it to the release of his upcoming budget, Cooper has previously proposed to raise pay to the national average by the early 2020s.

North Carolina is still ranked too low in average teacher pay, he said. "That's not the respect they deserve. When I send you my budget, we'll put our schools and our teachers first." Republicans have countered that they've raised teacher pay, in some form, five years in a row.

Senate leader Phil Berger gave the Republican response to the same television audience after Cooper's address. With Cooper seeking re-election in 2020 and GOP Lt. Gov. Dan Forest, who sat behind him on the House dais a potential gubernatorial rival next year, the political environment is likely to turn more noxious as the two-year session continues.

"It remains to be seen whether we will find more bipartisan solutions this legislative session or simply retreat to our corners," Berger said. "I, for one, hope it's the former."

Rather than unveiling any new programs or proposals, Cooper preferred to hit on previous themes and ideas, including his proposal to create tuition-free community college, fight drilling off the North Carolina coast, rejuvenate small towns and expand rural broadband access.

Cooper also praised legislators for the bipartisan recovery legislation approved following Florence, which caused well over $10 billion in damage and killed dozens of residents. He also highlighted heroism, pointing in the gallery to Trooper Nicholas Stoneroad, who kept working even when his own home was felled by trees, destroying almost everything he owned.

"I'm proud to report that the state of our state is determined," Cooper said, adding that "we're determined to help North Carolinians recover, and we're making progress."

Gov. Cooper concludes his State of the State Address: “There’s nothing a determined North Carolina can’t do. God bless you, our country, and the great state of North Carolina.” #stateofthestate #abc11 #ncpol pic.twitter.com/K697viqmtj

In his response, Berger hinted that the GOP's outlook will remain much the same.

"The work Republicans do this year won't come as much of a surprise to you," Berger said. "We came into power in 2010 after 140 years of Democratic control with a simple philosophy: to enact policies that provide an equal opportunity for success to everyone willing to work for it.