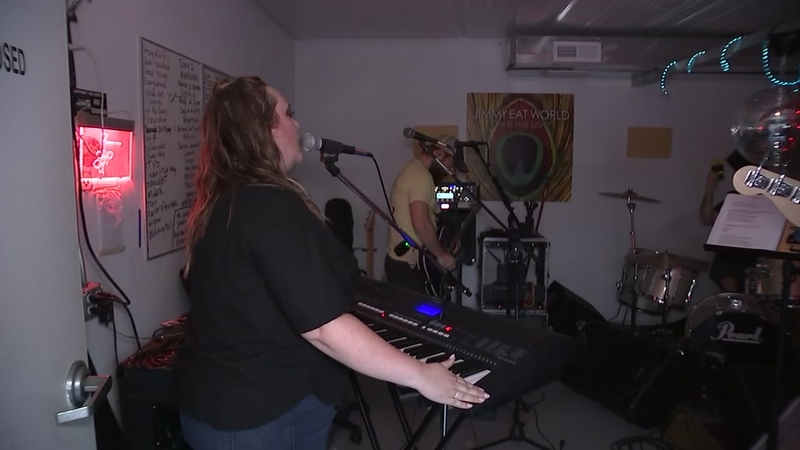 Raleigh storage units are alive with the sounds of music

RALEIGH, N.C. (WTVD) -- Storage units are often full of surprises, inspiring network TV shows that auction off contents inside units. But perhaps one of the biggest surprises you can find in Raleigh is several local bands using a storage unit off Capital Boulevard for practice space.

"Our lead guitarist, Andy, is the one who found it," explained Matt Gross, the drummer for Undercover, a '90s and 2000s cover band.

"We used to play in a building off Capital Boulevard; it used to house a bunch of bands. That building got demolished a couple of years ago so we were looking for a new home and stumbled upon this place," Gross said.

Undercover has been practicing in a storage unit for almost four years. They share their unit with another Raleigh band and are one of about a dozen bands using the storage spaces for rehearsals.

"It's rare to not hear another band at least in the evening," Gross said.

Gross said his band moved into a climate-controlled unit a few years ago, which is a great feature to protect the instruments from extreme temperatures and humidity. The units are still hot during practice but Gross says gigs are hot too, so it works out.

"It's not quite as comfortable from a temperature standpoint, but it certainly does the trick," Gross said. "It stores the instruments, it's a good place to play. You can get loud, nobody complains. And, when you split it up between us and the other band, it's like $30 bucks a person. You can't beat that."

Besides bands, Gross said he's noticed storage unit neighbors using a space to repair lawnmower engines, another does cabinetry, and someone works on bicycles. Not all storage facilities allow bands or businesses to work out of units.

Gross said the customers using their units for actual storage space are probably the most surprised to hear and see what his unit is being used for.

"They're moving their stuff in and out and here we are practicing the harmonies to MMMBop for 20 minutes," Gross laughed. "I'm sure that's weird for them. We've had some folks peek in; we get some thumbs up, we get some strange looks, too. If you want a free concert on a Tuesday night, come stop by your local storage unit."
Report a correction or typo
Related topics:
arts & entertainmentraleighbizarrelive musicbandmusiccreative time
Copyright © 2022 WTVD-TV. All Rights Reserved.
TOP STORIES
Report finds people of color pay more in rental application fees
Thousands lose power after strong storms, flooding possible Tuesday
Mom hears late son's heartbeat in 14-year-old boy for 1st time
Car plows into Raleigh home after chase with police
One woman hurt in Raleigh stabbing
Brendan Langley, fmr. NFL player, gets in scuffle at NJ airport
US to release monkeypox vaccine from national stockpile: CDC
Show More
Durham police investigate fatal shooting, crash along NC 55
'We sinned': Southern Baptist leaders react to report on sexual abuse
Congresswoman announces $3M for strollway between Chavis, Dix parks
Johnny Depp, Amber Heard trial: Kate Moss expected to testify
NFL QB Dwayne Haskins legally drunk when he was hit, autopsy shows
More TOP STORIES News