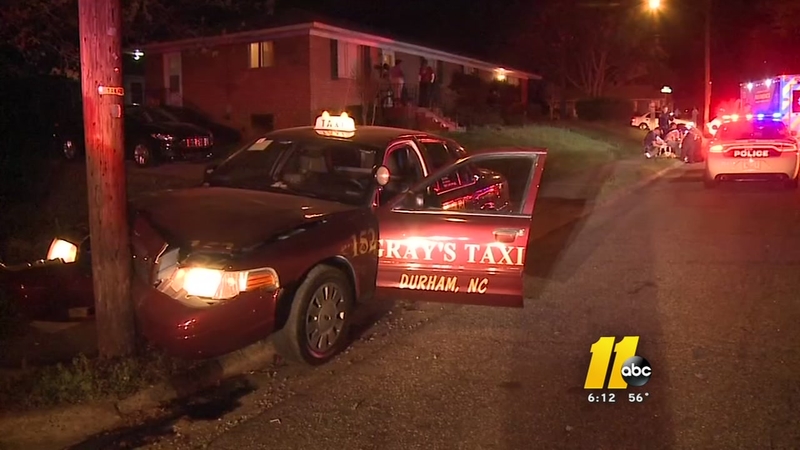 DURHAM, N.C. (WTVD) -- An investigation is underway after two taxi cab drivers were stabbed in Durham during the weekend.

The friend of one of the drivers spoke to ABC11 anonymously after his colleague was cut several times by the attacker.

"When he got to the address, that's when he pulled the knife out to try to kill him," the friend said.

The cab driver suffered lacerations to his hands and arms trying to fight off the man.

Durham police are working to determine whether the incidents were connected.

The first incident was reported about 10:45 p.m. on April 14 in the 600 block of Burlington Avenue. A taxi driver for ABC Cab told officers he was driving his cab when a passenger in the back seat pulled a knife and took cash from him. The taxi driver and passenger struggled inside the taxi and the taxi crashed into a phone pole.

The second incident was reported shortly before 9 p.m. on April 15 near the intersection of East Cornwallis Road and East Weaver Street. A taxi driver for Bakainy Cab told officers he was getting ready to drop off a passenger when the passenger pulled a knife on him and demanded money.

The suspect in both cases was described only as a black man wearing dark clothing, hardly a constructive lead for police to go on.

Taxi drivers say they are vulnerable and these attacks happen too often.

Some wonder whether city leaders and police can take more action to keep them safe.

"It's like just give you a report and let you go..that's a problem," the friend said. "They are not stopping other people to do the crime. It's not just for us as a taxi driver. It's for everybody."
Report a correction or typo
Related topics:
durhamdurham countydurham policetaxi driversstabbingtaxidurham county news
Copyright © 2021 WTVD-TV. All Rights Reserved.
TOP STORIES
Remains found at Florida park are Brian Laundrie's, FBI confirms
15-year-old accused of killing 13-year-old in Vance County
Thousands expected at event to honor Fallen Heroes
Man admits to throwing wife's body out of plane after killing her
Nonprofit builds new playset for Fayetteville 4-year-old with cancer
Expect above-average temperatures in NC this winter
Show More
Queen Elizabeth spent night in hospital after scrapping trip: Palace
Man, woman dead in Fayetteville murder-suicide
Medicaid expansion not in latest budget offer, NC speaker says
House votes to hold Trump ally Steve Bannon in contempt
Video shows Marine vet single-handedly disarming robber at gas station
More TOP STORIES News