TBH: What parents should know about this feel-good app teens love 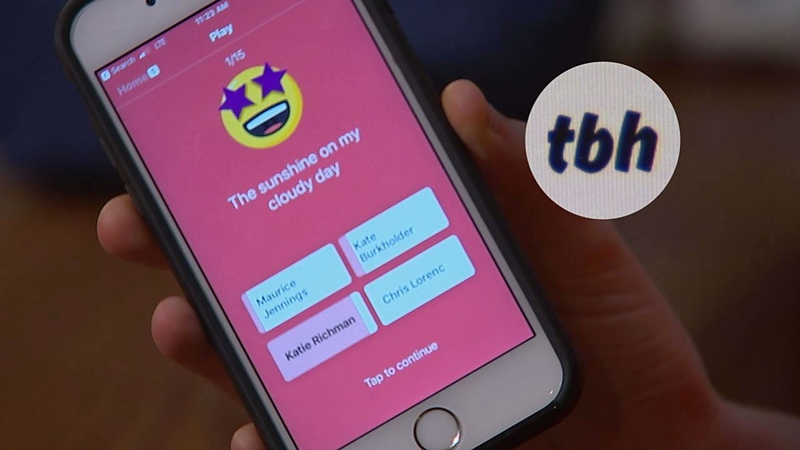 DURHAM, North Carolina (WTVD) -- One out of five children reports being bullied nationwide. That statistic coming from the Pacer Center, Champions for Children with Disabilities.

"Kids are getting cropped out of group photos, they're being bullied on group text messages, they're having hate accounts made about them," Laura Tierney said.

Tierney is the president and founder of The Social Institute in Durham. It's a startup company that focuses on teaching children how to use social media and technology in a positive way.

"This year alone since school started we have heard from over 2,000 students around the country about all the different ways you could be bullied online and there are many," Tierney said.

But just a few weeks ago, she was talking to young schoolgirls in Texas, and they introduced her to an app called To Be Honest, or TBH.

"TBH is unlike any other anonymous app because it focuses on positivity, and right now, middle-school girls are eating it up," Tierney said.

TBH is a polling app that gives or lets users create positive questions and gives a choice of four friends for the user to choose from as to who might fit that description. Tierney said there actually people working on the app to make sure only positive things get filtered through.

"I think apps like this, it is a nice pat on the back," Tierney said.

Nicole Carter is a Raleigh mother who looked into the app. She said as a family, they've chosen not to use it.

"There is concern this is yet another app that could morph into a situation that feeds an approval addiction," Carter said.

She also said there is a concern that users, young teens, need to provide contact information for other children without parental consent.

"Although the app is being monitored for positive questions, people are different in what they view as positive," Carter said. "They may not like how they are being seen by their peers."

Tierney warned that even that pat on the back can be used for bullying.

The app's positive vibes already caught the attention of social media giant Facebook. Business Insider reports Facebook bought the app because it said it aligns with its sense of community.

"As a parent of a teen, I have always encouraged my children to explore their world, interact with people, research their interests, and try new things," Carter said. "I believe social media has its place, but with diligent guidance from us and the help of resources."

Tierney said TBH is still extremely new and not yet available in all 50 states.