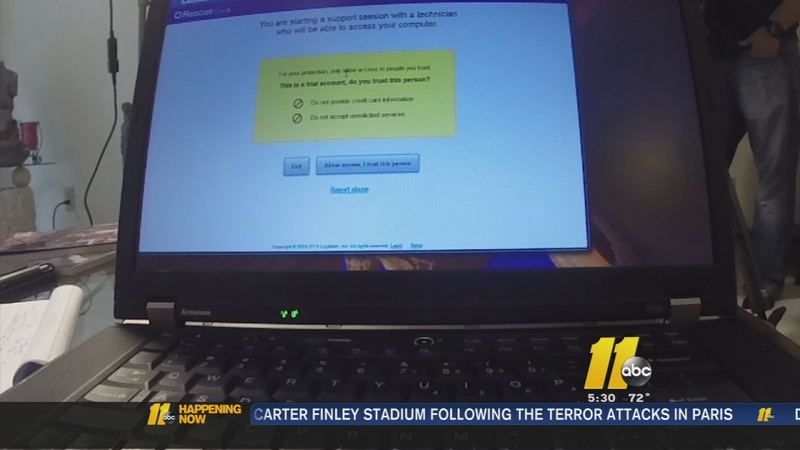 RALEIGH (WTVD) -- The I-Team has an important warning about a scam targeting people who need help with their computer or email.

When your computer isn't working well or your internet access is sluggish, you probably want help right away.

RELATED: GETTING YOUR MONEY BACK AFTER A TECH SUPPORT SCAM

But the I-Team discovered people claiming to offer "tech support" are really running a scam. As a Wake County viewer found out the trail led to India and a widespread, international con-game.

"This guy is a scam artist. He is 100% scam," Davis said as he showed the I-Team how the scammer remotely took over his computer.

"They're doing it nefariously. They really want to hurt somebody and that's how they make money," Davis continued.

Davis believes he was reeled-in by online scammers when he had a problem with his Time Warner internet access and did a Google search for "Roadrunner Tech Support".

He clicked on a Facebook page he thought belonged to Roadrunner, called the phone number and was told his computer was "infected".

"This is very crooked, very crooked." he said as he replayed for the I-Team how he originally found the scammer.

He agreed to let the scammer take over his computer remotely to 'fix' the problem.

"OK you're running the show now," he said to the person on the phone.

"I see you are moving my mouse. You've taken over my computer."

Things got fishy when the "tech support" scammer wants his e-mail password.

"You don't need to get into my mail account to tell me what's going on," Davis responded.

"They take over your computer. They look at your stuff, and they become you," Davis warned the I-Team. "I can't state enough how dangerous that is."

It appears these people are targeting more than Time Warner customers.

The Facebook page offering Roadrunner tech support led to dozens of other pages claiming they're tech support for iCloud, Verizon, AT&T, Hotmail and many more.

Colleen Robbins is a lawyer for the Federal Trade Commission in Washington. She has gone after such scam operations.

"They're typical scam artists," she said. "They're trying to get consumers to pay for services that they don't actually need," she explained.

She described the risk for consumers.

"They've paid the person hundreds of dollars. They've also allowed the scammer to remotely access their computer which then allows access to any personal files or personal information that there may be on the computer."

Duke Rogers is a cyber security investigator and owner of Triangle Forensics in Cary.

"The internet is sort of like a dark alley at night so you need to make sure that what you are seeing is really what it is and you have to approach it with a certain amount of skepticism," he advised the I-Team.

He used the webpage offering Roadrunner tech-support to track down the people behind it.

"We found the URL of a website they did. We were able to work back from that URL and did a 'Who Is' search to be able to see who owns this URL and this URL was owned by a company and an individual in India," Rogers pointed out.

Colleen Robbins says she's taken action against nine of these bogus tech support companies in India and the U.S.