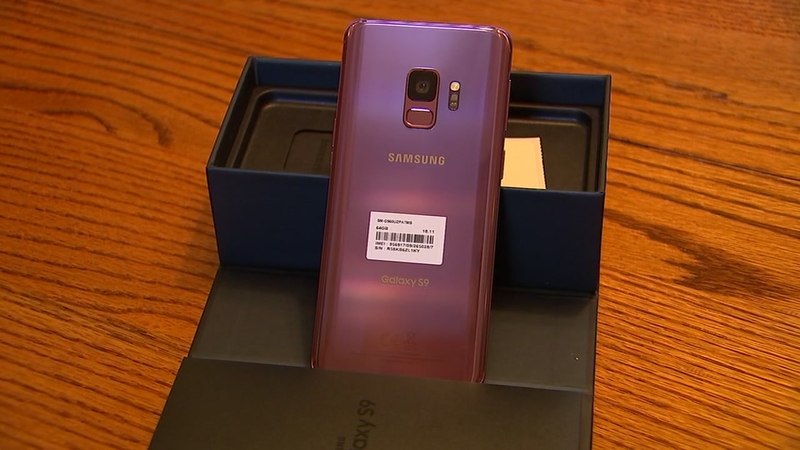 CARY, N.C. (WTVD) -- Cary resident Ronald Carr said it was a return runaround when it came to getting a refund for a phone he mistakenly ordered.

The problem revolves around a cell phone is ordered from Samsung. When Ronald ordered it online for a gift for his son, he realized he made a mistake after it arrived.

Ronald said his son immediately said, "Why did you order me a pink phone?"

"I was like pink? I'm taking it back," Ronald recalled. "I didn't realize I ordered pink." 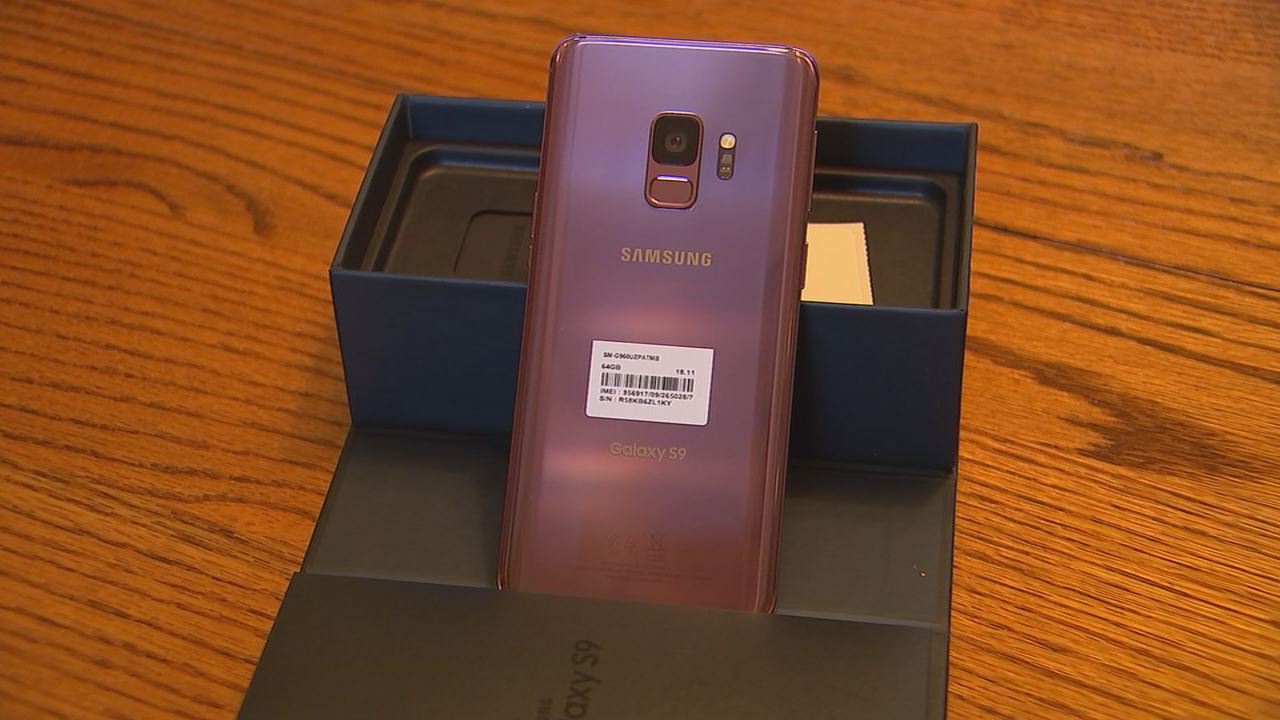 Since this pink phone was a no-go, Ronald went online, ordered the black phone his son wanted and put in a request for a return with Samsung.

"I was granted a return authorization. We packaged the phone up in the same manner in which we received it with all the same protective packaging on it," Ronald said. "We hadn't as much powered the phone on. There was no need; he didn't want a pink phone."

About a month later, Ronald got the phone back. The documentation from Samsung stated it was refused because of modified software.

He disputed the return refusal and then Samsung sent an email along with these photographs that Samsung claimed are the phone in question and it stated that it shows the software was modified because on the screen of the phone, one code says "fuse blown" and system status "custom."

Ronald said this angered him even more.

"We haven't even powered it on, and I certainly wouldn't know how to modify the software on a cell phone," Ronald said. 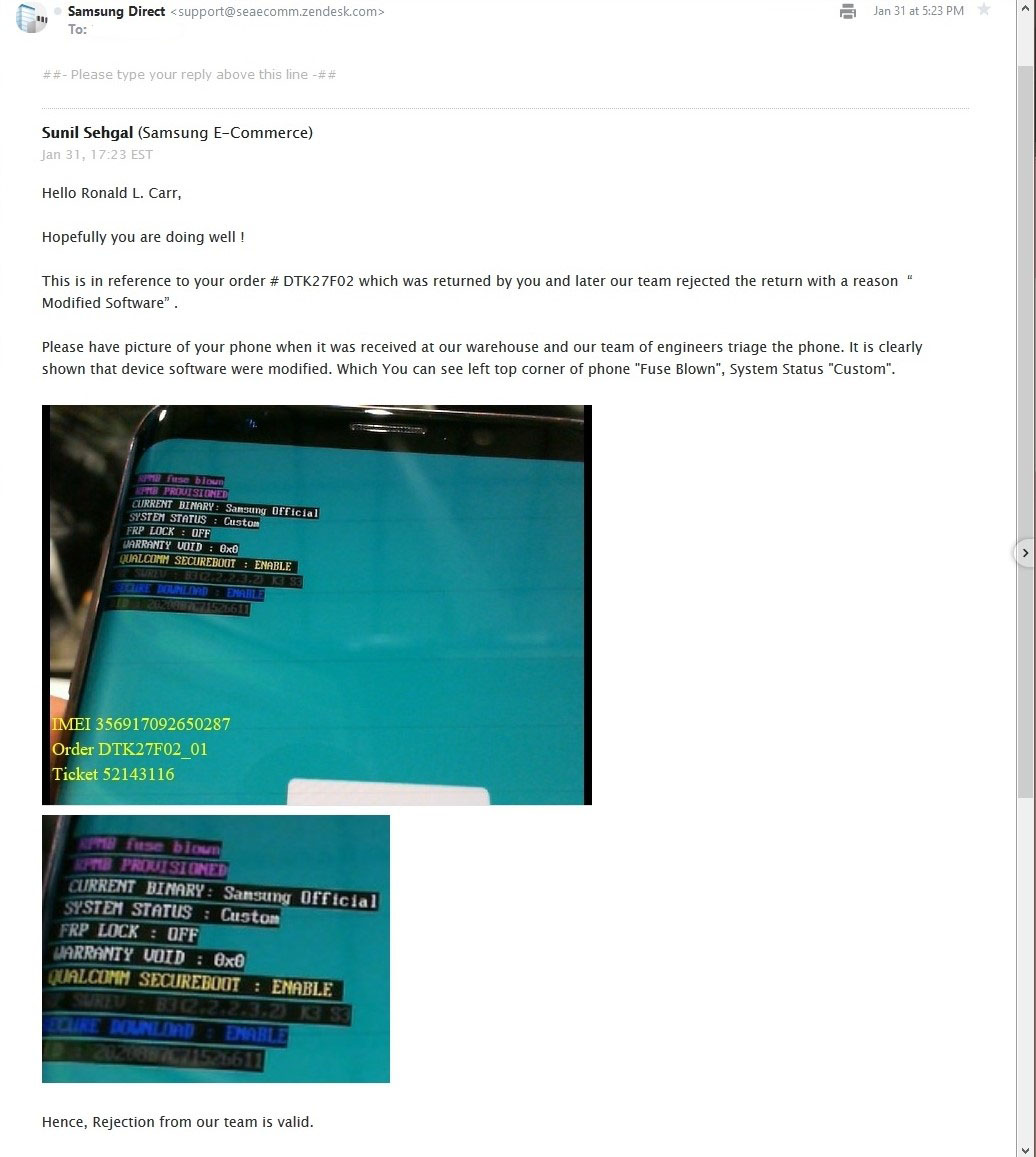 The email Ronald Carr received from Samsung rejecting his claim.

Ronald got in touch with me and after I reached out to Samsung, a representative with Samsung reached back out to Ronald and instructed him to send the pink phone back in. This time, after returning it, he got a full refund for the pink phone.

"It's turned out great," Ronald said.

Samsung worked directly with Ronald on this and did not provide any comment.

The Troubleshooter takeaway here is that before you place any online order, double, even triple check that you are ordering exactly what you want.

Also if you do have to return it, take pictures and video of the item before you return it to show the condition of the product.
Report a correction or typo
Related topics:
technologycarywake countytech giftstroubleshootersamsungfinancesmartphonesconsumer concerns
Copyright © 2021 WTVD-TV. All Rights Reserved.
TROUBLESHOOTER
Watch out for scammers posing as your favorite Instagram accounts
Troubleshooter helps worker told she'd have to pay back $8k in unemployment
Durham couple charged for COVID test: How to avoid it happening to you
Don't fall for these scam voicemails trying to trick you out of money
TOP STORIES
In Raleigh, Biden encourages vaccinations, warns about Delta variant
At least 3 dead, up to 99 missing in Florida building collapse
'Scary five seconds': Moore Co. resident recounts bobcat attack
Security camera video shows moment of Surfside building collapse
Why LGBTQ+ terminology matters: ABC11 hosts a virtual discussion
Chapel Hill bar The Library closing just as owner hoped to reopen
UNC Black Student Movement to protest over tenure controversy
Show More
Pet Alert: As dogs roam the yards, snakes may be lurking
What to expect in Derek Chauvin sentencing
Durham man charged in Chapel Hill road rage shooting that injured man
Nonprofit rolls out mobile vaccination units to serve communities
Nearly all COVID deaths in US are now among unvaccinated
More TOP STORIES News