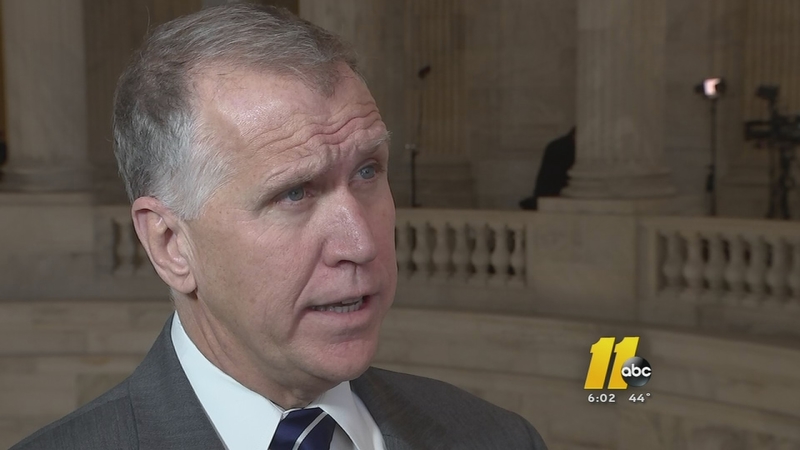 Tillis: Give firms more leeway on sanitation, other mandates

"We're one of the most heavily regulated nations in the history of the planet," Tillis told audience members at a Washington, D.C. think tank on Monday.

While making a larger point about what he believes is government over-regulation, Tillis mentioned a recent conversation with a constituent at a Charlotte-area Starbucks.

He said government rules were burdening businesses, and companies should be allowed to opt out -- even when it comes to rules that require restaurant employees wash their hands before returning to work.

"I said I don't have a problem with Starbucks if they choose to opt out of this policy as long as they post a sign that says we don't require our employees to wash their hands after leaving the restroom," Tillis said to audience laughter. "The market will take care of that."

At Jimmy V's Osteria in downtown Raleigh, we saw plenty of employees washing their hands. We spoke to diners who unsurprisingly expect nothing less.

"I absolutely would like everybody in the restaurant industry to wash their hands and be required to do so," said Jennifer Knox.

"I also wash my hands before I cook a meal and so I would think that everybody should, yes," said Margaret Eagles.

Tillis and his town hall host laughed about the comment.

"Well I'm not sure I'm going to shake your hand", the host said to more audience laughter.

However, Tillis' off-hand comments did raise eyebrows in Washington. There was a flurry of headlines about it.

Russell insists he'd never cut corners on hand washing requirements for employees, but he agreed that some government rules can be burdensome at times.

"There are many rules that change constantly and we're not always kept up to date. You'll get a health inspection one quarter and the second quarter it becomes an issue," Russell said.

The question for diners: Would they trust restaurants to police themselves?

"I just find [government is] overreaching a little bit. I mean it's just not necessary. Let us choose. Let us decide what we want to do," said Dawson.

But Albert Joseph, who was just leaving lunch at Chick-Fil-A, thinks government should be the ultimate enforcer on health rules.

"It's all a part of the chain of command. You have someone at the top, and they're the ones who set the rules for the lower people, and it just works its way down," Joseph said.

Senator Tillis' office declined our offer to clarify the comments.