Trench collapse: Body of worker recovered from collapsed trench in Brier Creek, 3 others pulled to safety 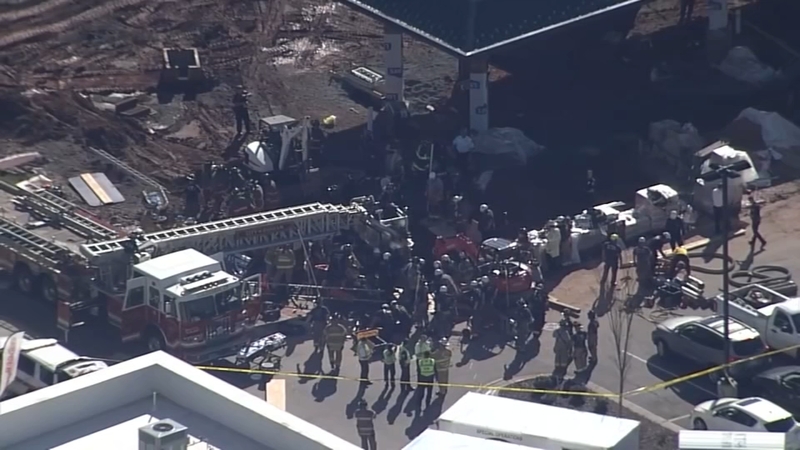 Body of worker recovered from collapsed trench in Brier Creek

DURHAM, N.C. (WTVD) -- Emergency crews have recovered the body of a construction worker from a collapsed trench in Brier Creek on Wednesday.

Two other workers were hospitalized and another escaped under his own power.

Chopper 11 HD flew over the scene at 4209 Corners Parkway near TW Alexander and Glenwood Avenue to see multiple fire trucks and dozens of firefighters working at the scene.

Four workers were in the trench when it collapsed. One of them escaped on his own; one got out of the trench and walked to nearby paramedics; Chopper11 HD saw crews pull a third worker from the trench on a stretcher. A fourth worker remained missing for several hours until officials confirmed he had been killed and recovered his body from the trench about 4:15 p.m.

"Our condolences go out to the family and friends of the deceased worker," Iannuzzi said.

Two of the workers were taken to Duke University Hospital. Their conditions were not considered life-threatening.

Iannuzzi said from his perspective the trench appeared to be at least 6-8 feet deep.

Fire officials talk about the rescue effort after a trench collapsed at Brier Creek in Durham.

"I could see the heads of our people in there," Iannuzzi said. "I'm guessing that it was six to eight feet deep where they were working. Now, that doesn't account, that may be boards because they do have a ramp in there. They've got other equipment. So how deep it was at the time I do not know."

A manager at the nearby Jersey Mike's said the construction workers had been working to build a gas station for Harris Teeter. During the past month or so crews had been digging deep holes where they would put gas tanks.

"I'm just praying everyone is OK. It's horrible," Jersey Mike's manager Ashley Losurdl said. "All we can do is pray."

She said the worker who escaped on his own was saying "I'm fine. Don't take me. Don't put me on the stretcher. I'm fine."

"The hole, it's deep. It's about like, 10 feet deep. And then I guess the dirt from the sides just went ahead and collapsed on them," a construction worker at the scene told ABC11 crews.

"We were out here working," said Armando Mejia. "All of sudden, we hear this one guy just yelling out to get shovels and all that stuff. And then we go over there. We see one guy halfway covered. We see the other guy was all the way inside the dirt. But there was a third guy that was really deep inside the dirt."

The company in charge of the construction project released the following statement Thursday morning: