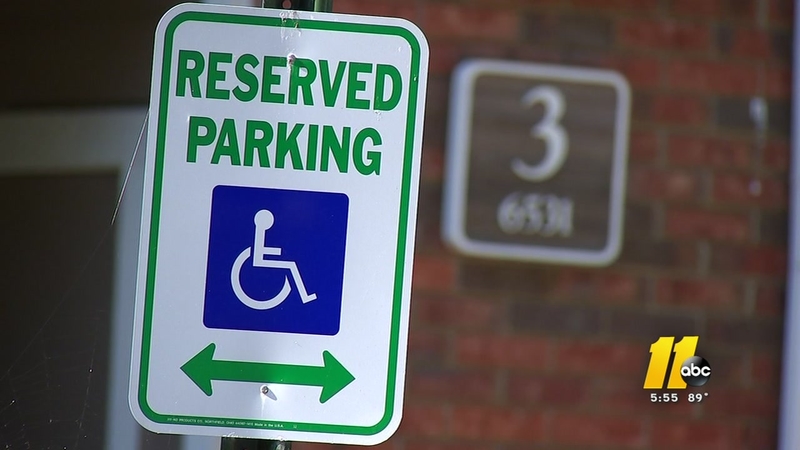 RALEIGH, NC (WTVD) -- It's always an inconvenience when your car gets towed unexpectedly, but even more frustrating when you don't think the tow was even allowed to happen.

Asia Marche's car was parked at Lynn Lake Apartments in a handicapped space that was assigned to her mother, a disabled resident of the complex. Her mom has a valid handicapped placard, but Asia says that it was in between the seats when she parked the car.

When she came out and saw that the car was missing, Asia's first thought was that it had been stolen. But after making a few calls, she learned it had been towed by Chandler's Towing.

Upon arrival to the tow lot, Asia tried to explain why her car shouldn't have been towed, but they wouldn't even listen to her.

The original towing cost was $165, but Chandler's did knock it down to $100. Asia paid up but started doing her own research.

Furthermore, the handicap spot where Asia was parked isn't technically enforceable. North Carolina General Statue 20.37-6(d) says that the maximum penalty for parking in one of the spots must be stated on the sign. You can see this sign does not have the penalty.

Even after bringing that research to Chandler's, Asia says they still wouldn't refund her money, so she got in contact with me and I reached out to them.

"I was offered a refund back from the towing company and the owners, and they were much more polite," Asia said.

When I spoke to the tow company, one of the owners of Chandlers told me they didn't tow her car deliberately. He said they used to have a contract with the apartment complex and were never told to stay off the property, or that they didn't have a contract until after Asia's car was towed.