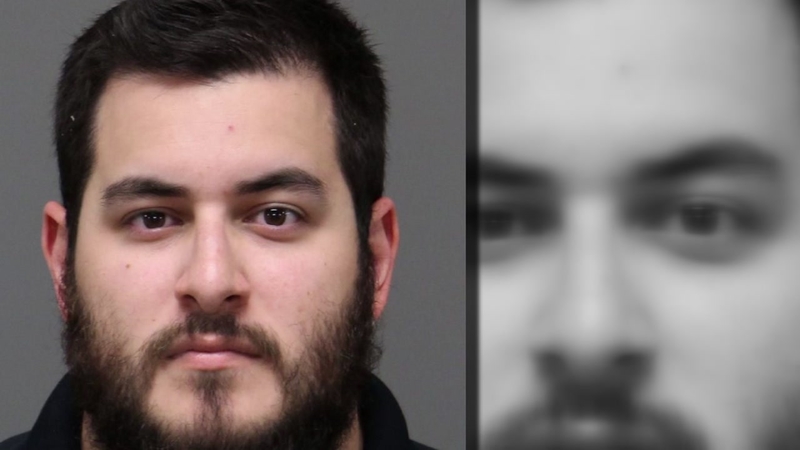 Just minutes into the ride, police swarmed the car and arrested her driver.

Could you imagine? Raleigh woman was mid-Uber ride when police swarmed the vehicle & arrested the driver for Impersonating a Police Officer. Authorities say they found a gun inside. We’ve learned in 2017, he was charged w/felony & accused of shooting 2 people in Smithfield.#ABC11 pic.twitter.com/govIB45PkE

Chirico was sitting in the backseat of a cruiser when she snapped a picture of Devin Stenulis being arrested.

He was charged with impersonating a police officer.

Authorities said that shortly before Stenulis accepted the ride, he was rolling around Raleigh flashing lights and blaring a siren to get a driver to move over.

"I was in shock. I was just trying to get home," Chirico said.

On the surface, Stenulis seemed like a good pick for a quick ride. He had a 4.95 rating and there was a diamond icon next to his picture. One user wrote "excellent service."

The incident happened last month as Chirico was leaving a holiday party on Glenwood South.

A sedan pulled up and she hopped in the passenger seat. There was some small talk, but the pleasantries didn't last long. Within five minutes, flashing lights started closing in on the car.

Police were creeping up and Chirico told ABC11 that Stenulis put his hand on the console.

Police said he had a gun inside.

Stenulis stopped the sedan and officers boxed him in. Officers quickly got out Chirico out of the Uber and rushed her inside a police cruiser.

"It's scary. I've never been around guns before, so I'm lucky that nothing happened and that RPD came when they did," she said.

Her immediate concern was her personal information and that Stenulis knew where she lived.

"My data or anybody's data really can be breached," Chirico said.

Uber did refund her the ride. Chirico said she also received an apology.

ABC11 investigated and found Stenulis has had multiple run-ins with the law.

In 2017, again in Raleigh, he was arrested for impersonating an officer.

That same year, he turned himself in for a violent crime in Johnston County. He was accused of shooting two people outside a business while working as a bail bondsman. He's due in court on that felony charge in March.

Chirico said she contacted Uber to find out about identity protection and the company's background-check policy.

"They said they can't disclose that with me," she said. "It was pretty infuriating ... I do believe they need to be more transparent with their policy as part of their corporate responsibility for the safety of others."

An Uber spokesperson said what happened is "completely unacceptable" and the company cut ties with Stenulis in December after the arrest.

Uber also said it has invested in new technology where it receives notifications if a driver is involved in a criminal offense.